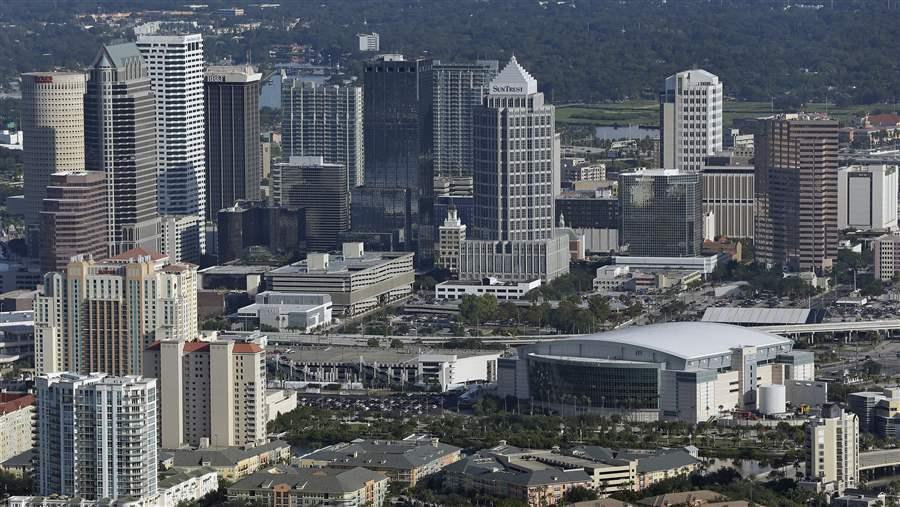 The Tampa Bay area, whose skyline is shown here, attracted more people in 2014 than the year before. Counties in Florida, Nevada and Arizona had larger influxes of people, while some counties in Illinois, Virginia, New York and California saw more people moving out. (AP)

Jen Dunlap took a lot of ribbing from her friends in Michigan when she decided to move to North Tampa, Florida, with her husband and six children.

Friends said, “It’s so hot!” But the Dunlaps were tired of shoveling snow and ready for the warmth they had seen on Florida vacations. “We absolutely moved here for the weather,” Dunlap said. “The opportunities for our children, all of us really, to be outside a majority of the year has been a huge plus.”

The Dunlaps had plenty of company, as Hillsborough County, which includes North Tampa, had the biggest one-year turnaround in the nation as far as attracting new residents. After losing thousands of people two years in a row, the county gained 8,500 in 2014, according to a Stateline analysis of recent U.S. Census population estimates.

The Dunlaps reflect another trend: Americans are picking up and moving again as the recession fades, personal finances improve and housing markets recover. Counties in Nevada, Arizona, eastern California and Tennessee also saw some of the nation’s biggest growth in movers last year.

“People are finally starting to move again after years of hunkering down,” said Dowell Myers, a demographer at the University of Southern California. “Young people have kept graduating from school and moving into large cities, like Los Angeles and New York. But the normal out-movers have been suppressed. They are finally starting to break out.”

Historically, about 17 percent of families move in a given year, but the recession knocked that number down as low as 11 percent, said Kimball Brace, president of Virginia-based Election Data Services. After two straight years of improvement, the number of moving families has partially recovered to about 15 percent.

“The recession kept people at home. They couldn’t sell their home, they couldn’t find a job,” Brace said. “We’re starting to see bigger numbers. We’re not all the way back.”

By next year it should be clearer how the moves will affect political power, Brace said. But some Sun Belt states already are expected to gain congressional seats at the expense of Northern states where outbound moves are picking up.

William Frey, a demographer at the Brookings Institution, said working-age people such as the Dunlaps are joining retirees in moving to Florida from Northeastern states, and from Los Angeles to eastern California, Arizona and Nevada.

The nation’s internal migration doesn’t compare to the movement before the 2007-09 recession, Frey said, but the trend appears underway.

“We are not close to the surging movement that characterized the boom years of the early 2000s, but the increased draw of these counties shows that we are inching back,” Frey said.

The increase in moves to popular warm-weather vacation spots like Florida, Nevada and Arizona may have something to do with retirement and something to do with an easing of the recession that allows younger people like the Dunlaps to move more freely to their dream homes, experts say.

Florida, which overtook New York as the third-most populous state last year, has seen an influx of young people in their 20s and older people in their 50s and 60s, said Stefan Rayer, director of the population program at the University of Florida’s Bureau of Economic and Business Research.

The biggest inflow was people in their 20s, Rayer said. But they also represent the age group with the biggest outflow from the state.

“So the net effect is you get more people of retirement age,” he said. “The gains tend to be people in their 50s and 60s.”

Retirement appears to be improving the housing markets in many areas, especially in Arizona, Nevada and Florida, said Chris Porter, chief demographer for John Burns Real Estate Consulting in California.

“The housing market in the regions of the country that tend to attract retirees is generally performing better relative to the markets from which those retirees tend to leave,” Porter said.

“In markets such as Phoenix and Las Vegas, we are seeing more new communities opening up that are age-targeted or age-restricted. The supply is arriving to meet the demand.”

Arizona has seen increases in the population 65 and older, including people moving in from other states, said state demographer Jim Chang, though he said state calculations show less growth than the Census estimates.

Besides moving, such other factors as births and immigration can also drive population growth. For instance, Los Angeles County, Brooklyn and Queens, New York, and Fairfax County, Virginia, grew in population last year despite having a large number of people move out.

And factors such as job opportunities, taxes and housing costs can help drive relocation.

The “huge” increase in people leaving Cook County – 17,000 more than in 2013 – could be linked to a painfully slow recovery there, said economist Richard Dye of the University of Illinois.

In New York, the Empire Center for Public Policy, a fiscal watchdog group, found that upstate residents are leaving at a faster rate than city dwellers.

“Sure, people make money on Wall Street and retire to Florida, but that’s only one fragment of the economy in New York,” said Empire Center spokesman Ken Girardin.

Beacon Economics, a consulting firm in Los Angeles, found in a 2013 study that affluent and highly-taxed people tended to move into California, while those with less education and more modest income tended to move out in search of more affordable housing.

“As tantalizing as some of the anecdotal evidence is about how income tax rates negatively affect the quality of life of high-income earners, motivating them to leave, the data on individual migration reveals a far more complex picture,” the study concluded.

“High housing costs have made California an increasingly difficult place for lower income residents with less education to maintain their quality of life,” the study said, “while those with higher education and who work in high-wage occupations continue to find the state an attractive place to live.”