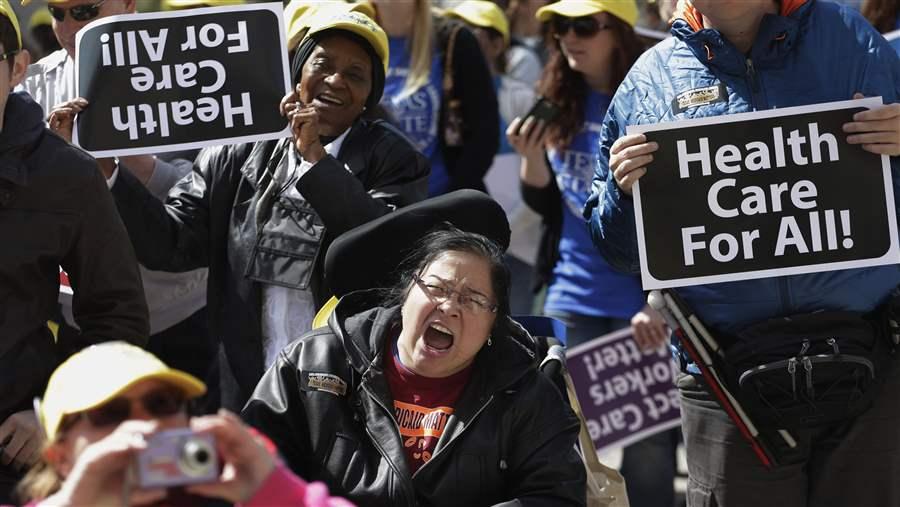 Protesters march on the Texas Capitol to try to persuade legislators to expand Medicaid under the Affordable Care Act. The state’s decision not to expand has denied Medicaid coverage to 1.7 million Texans. (AP)

DALLAS — Dallas County property owners paid more than $467million in taxes last year to Parkland Health and Hospital System, the county’s only public hospital, to provide medical care to the poor and uninsured.

Their tax burden likely would have been lower if the state of Texas had elected to expand Medicaid, the federal-state health insurance program for low-income people. If more low-income patients at Parkland had been covered by Medicaid, then federal and state taxpayers would have picked up more of the costs.

Elsewhere in Texas and in most of the 20 other states that have chosen not to expand Medicaid, residents pay local taxes to help support hospitals that care for uninsured people. On top of that, they pay a portion of the federal taxes that help subsidize Medicaid in the 29 states and District of Columbia that did expand the program to cover more people — places where residents can expect to see lower local taxes as more people become insured.

“Taxpayers (in non-expansion states) are not going to get off the hook any time soon,” said Linda Quick, president of South Florida Hospital and Healthcare Association. Florida is one of the non-expansion states where localities pay property taxes to support indigent care.

Under the Affordable Care Act, and a subsequent U.S. Supreme Court decision, states have the option of extending Medicaid eligibility to all non-elderly adults who make less than 138 percent of the poverty line (an annual income of less than $16,242 for an individual). For the first three years, the federal government will pay 100 percent of the costs associated with new enrollees. After that, the federal share gradually declines until it reaches 90 percent in 2020 and beyond.

Nationwide, the cost of caring for uninsured people in non-expansion states between now and 2024 is projected to reach $266 billion if no new states decide to expand Medicaid, according to a report in April from the Kaiser Family Foundation. If all states decided to expand, that cost would drop by a third.

The Urban Institute reports in a study for the Kaiser Family Foundation that states and localities spent nearly $20 billion for uncompensated care in the United States in 2013. The federal government paid $33 billion and the private sector $700 million.

Last year, Texas hospitals spent $5.5 billion for uncompensated care, according to the Texas Hospital Association. The federal government reimburses hospitals for part of that cost through a $1 billion-a-year Medicaid subsidy known as the Disproportionate Share Hospital Allotments or DSH. As part of the Affordable Care Act, the DSH program will be sharply reduced starting in 2018. A recent Health Affairs article projected that Texas hospitals could see a 20 percent drop in DSH payments in the first year.

Lance Lunsford, a vice president with the Texas Hospital Association, said without that federal money, residents would have to foot the bill in the form of higher insurance premiums and, in jurisdictions with public hospitals like Dallas County, higher taxes. “Hospitals have no choice but to limit their exposure,” he said. “That means cost-shifting to consumers and taxpayers.”

Texas also receives $29 billion through a five-year Medicaid demonstration program, with about half of that money going to care for the uninsured. That program expires next year and the state is negotiating with the federal government over its renewal. The Obama Administration made it clear in April that it prefers Texas insure more people by expanding Medicaid than continuing to reimburse hospitals that serve the uninsured.

Despite that, the Texas Legislature ended its session earlier this month with no action on Medicaid expansion. If the federal government withholds funding for hospitals, local taxpayers will likely have to make up the difference.

“If you have the federal funding source going away, the money has to come from somewhere. These people aren’t going away,” said Teresa Coughlin, a senior fellow at the Urban Institute.

Abbott calls Medicaid, “an already broken and bloated … program." In March, members of the Republican Senate caucus wrote to President Obama reiterating their opposition to expansion. They noted that the “Texas Medicaid program has grown from 11 percent of the state budget in 1987 to 29 percent in 2015,” a trajectory they labeled “clearly unsustainable.”

The senators urged the Obama administration to grant the state more flexibility to control spending in Medicaid as it currently operates in the state. They asked that the state be able to impose work requirements on recipients, introduce “personal accountability requirements” such as cost-sharing, fees for missed appointments, the creation of health savings accounts, and the use of asset testing to determine eligibility for the program.

The Urban Institute estimates that if Texas had expanded Medicaid in 2014, over the next 10 years it would have spent $5.7 billion as its share of Medicaid expenses for the newly eligible population, while drawing down nearly $66 billion in matching federal Medicaid funds.

The decision also means a continued tax burden for local citizens, including those in Dallas County. “Our taxpayers pay more to Parkland for uncompensated care than for all of our other services combined,” said Dallas County Judge Clay Lewis Jenkins, who presides over the five-member commission that governs the county. “It is also the fastest growing budget item.”

Jenkins, a Democrat, is among the highest profile politicians in the state to champion the case for expanding Medicaid, saying it would bring relief to county taxpayers by reducing what the county pays for uncompensated care.

Dallas County estimates that expansion would have extended Medicaid eligibility to an additional 133,000 county residents and would have brought an additional $580 million in Medicaid reimbursement. That money would not have eliminated all expenditures for uncompensated care because some, including undocumented workers, would remain uninsured.

Texas isn’t the only state where local taxpayers cover the costs. Thirteen of the 21 states that have not expanded Medicaid have public hospital districts where local tax dollars pay for uncompensated care.

Grady Memorial Hospital in Atlanta, for example, receives $57 million a year from local taxpayers. The federal government’s expected cuts in uncompensated care reimbursement could eventually cost the hospital $45 million a year. Hospital CEO John Haupert said he does not expect the two counties that Grady serves to make up that loss, which could mean a cut in services.

“We would have to reevaluate the clinical services we could continue to supply and the clinical services that we couldn’t,” Haupert said. Georgia currently is working on a proposal that would keep some federal uncompensated care funds flowing in the expectation that more of the uninsured would receive comprehensive health care.

Mayors and county executives in other non-expansion states, including Republicans, have urged their states to expand coverage. One, Republican Mayor Adam O’Neal of Bellhaven, North Carolina, marched to Washington, D.C., twice in support of expansion.

Some legislators in some other non-expansion states have expressed concerns that continuing to provide indigent care will endanger the survival of many rural hospitals. Since 2010, 55 rural hospitals have already closed, according to the North Carolina Rural Health Research Program. (The list is here.)

DeShawn Bunton is one of Dallas County’s uninsured, who would qualify for Medicaid if the state expanded. A tiny, 51-year old, unemployed woman living in a one-bedroom, West Dallas apartment, Bunton has three ways of dealing with her lack of health insurance: visiting the emergency room, scavenging leftover medicine from friends or doing without treatment.

When her untreated diabetes makes her especially shaky and she gets a terrible taste in her mouth well known to diabetics, she goes to the nearest emergency room for treatment. During bad asthma attacks, she counts on friends to let her use one of their inhalers.

When she was hospitalized after having a heart attack on a train last year, Bunton passed on having a recommended stress test because she couldn’t afford it. She also left a prescription for a heart medicine unfilled.

Recently, she enrolled in a program at Parkland that allowed her to get back on all her medications. She is vastly relieved. “I was scared I was going to get sick at any time,” she said. “I had to watch my stress levels to make sure nothing upset me.”

The Parkland program is supported by local taxes. And Bunton now volunteers for the Texas Organizing Project, a grassroots organization pushing for expansion.