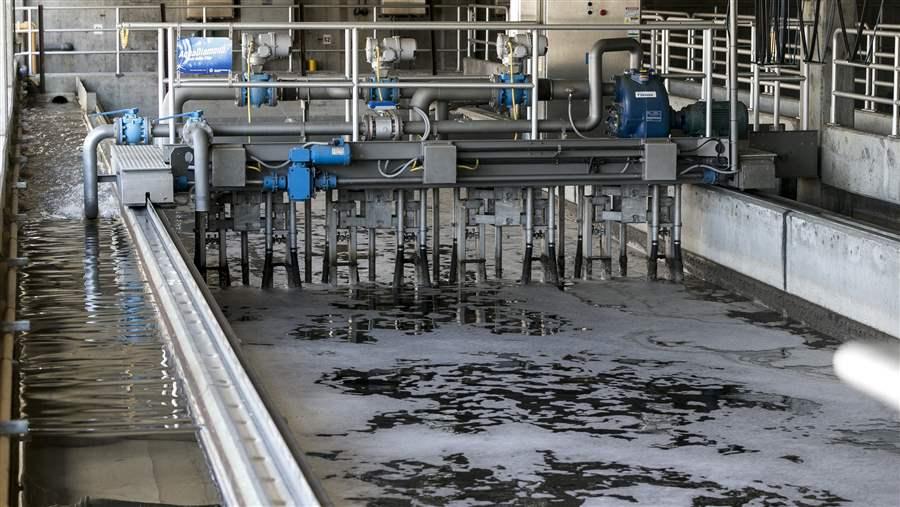 A California sanitation plant where millions of gallons of wastewater are purified each day. (AP)

This story has been updated to say that Cleveland's underground tunnels could store at least 312 million gallons of storm sewage.

As drought grips California, floods overpower Texas and Eastern cities grapple with crumbling sewers that pump contaminated runoff into waterways, state and local governments are revisiting how they get, use and manage water.

One method is to harness the rain. Some governments are doing this through massive systems that treat and pump stormwater back to residents, while others are looking to the installation of rain collection systems for homes and businesses. A few cities are introducing green infrastructure designed to put water back into the ground rather than letting it flow down the street.

Sally Brown, an associate professor at the University of Washington, said the last time governments spent significant amounts of money on water issues was after the Clean Water Act in the 1970s, when they had to change how they treated water and wastewater. Today, environmental factors coupled with water availability are forcing state and local officials to create new policies and invest financially to ensure future access to water.

“It’s a whole different mindset; we’re not used to this mindset of not being in a state of plenty,” said Brown, whose research focuses on soil health, climate change and wastewater treatment.

According to NASA data released last week, the world’s groundwater supply is quickly dwindling, with a majority of the largest aquifers – including one in California’s Central Valley, which provides about 25 percent of the country’s food – being drained more quickly than they are being replenished.

“Our precipitation patterns are going to be a lot less predictable,” Brown said. “We have to figure out different ways to have reliable sources of water.”

Some states and cities are experimenting with new strategies.

In Altamonte Springs, Florida, water will soon run off Interstate 4 into the city’s stormwater reuse system that pumps reclaimed water to homes and businesses for tasks including irrigation and car washing. The undrinkable water, which would otherwise sit in massive reclamation ponds alongside the highway, will also be pumped down the road to the growing Orlando suburb of Apopka.

Reclaimed water is stored in Cranes Roost, a recreational lake on the northwest side of town, and travels through 83 miles of pipe to every home and business in the city, he said.

“Finding ways to reuse water is more than just smart from a business standpoint, but it is one of the linchpins that make our community sustainable for business and the people who live here,” Martz said.

Population growth and development have enabled both Altamonte Springs and Apopka to consider water reuse, but that option might not be viable for older municipalities with established systems of underground pipe and treatment plants, Brown said.

In Apopka, where the population has ballooned from 15,000 in the late 1980s to 46,000 today, access to reclaimed water has been a requirement for new development, Mayor Joe Kilsheimer said.

“Being able to distribute this way, through a network of residential customers, is ultimately more sustainable and does provide an economic benefit three times,” he said. “We sell it to a customer for potable water, then we charge them when they send it back to us as wastewater, and then we charge them when we sell it back to them as reclaimed water.”

According to Brown, Americans only use 1 percent to 3 percent of the reclaimed water available, and treating and redistributing stormwater doesn’t guarantee residents will put it toward the 80 to 100 gallons they use each day. There is additional potential for water reuse at home by collecting storm runoff in rain barrels and reusing overflow from showers and other household systems, she said.

Rain barrels, large containers that can hold tens of gallons of rainwater, collect runoff from homes and businesses by connecting to downspouts. The water they collect is commonly used for watering gardens – which can be responsible for up to 40 percent of household water use in the summer – saving homeowners money and reducing stormwater flow to sewer systems.

Mike Ruck is the owner of Rain Water Solutions, a Raleigh, North Carolina, company that makes rain barrels and installs larger systems to repurpose rainwater for customers ranging from farmers to school systems. He said larger systems can be used for everything from cooling towers to toilet flushing.

But Ruck can’t do much business in Colorado, where collecting water at home violates complicated water rights and stormwater collection is largely illegal.

Lawmakers proposed a bill this year to reverse that, but it failed in the state Senate.

“We followed Colorado pretty closely because we always kid around, you can walk down the street and smoke a joint, but you can’t collect the water off your roof,” Ruck said.

Similarly, in Nevada, a measure to create regulations for residential reuse of gray water – water collected from showers, sinks, washing machines and other home appliances – did not pass.

Ruck said collecting and using water on site is beneficial to water tables, especially as communities grow and the amount of pavement and other non-absorbent ground cover continues to increase.

Colorado did enact a law this year that provides for a 10-year pilot program allowing the collection of rainwater from the roofs of some new residential and mixed-use developments.

Brown points out that while reclaiming water works for municipalities that are still growing, processing and treating rainwater takes a great deal of energy and can be too expensive for cities with existing infrastructure, some of which is a century old.

“In order to reuse that water, you have to build and set up new pipes,” Brown said. “That’s a big infrastructure investment and we haven’t really made that.”

John Rumpler, a senior attorney with Environment America, said many in the environmental community believe that while reusing stormwater is helpful, creating green infrastructure – using plants and other green space to allow water to be absorbed into the ground rather than run into sewer systems – is the most sustainable way to stem runoff that overflows sewage plants, (and ultimately pours untreated wastewater into tributaries).

“Every time we go to process or reprocess water in any way, we’re talking about enormous energy consumption,” Rumpler said.

Cleveland is operating under a federal consent decree to reduce the amount of raw sewage that overflows into Lake Erie, the Cuyahoga River and other local tributaries in and around the city. In response, the Northeast Ohio Regional Sewer District is using a 25-year plan that combines treatment plant improvements, underground tunnels to store at least 312 million gallons of storm sewage and green infrastructure to reduce sewage overflow.

The sewer district has spent $55 million on nine green infrastructure sites and awards grants to local governments and nonprofits to build green areas.

However, green infrastructure will not solve Cleveland’s sewage overflow problem on its own, said Kyle Dreyfuss-Wells, the sewer district’s deputy director of watershed programs.

On the East Coast, Philadelphia has developed a first of its kind partnership with the EPA to implement a green infrastructure program that targets parks, schools, streets and vacant land.

The city, which was the first in the country to supply residents with drinking water, is spending $1.2 billion over 25 years to add green infrastructure and improve treatment facilities.

South of Philadelphia, a cost-benefit analysis of a 2011 Green Infrastructure Plan in Lancaster, Pennsylvania, shows a projected $2 million in electricity and natural gas savings for the city and its 60,000 residents after a 25-year implementation period. The study also points out that the green infrastructure plan could save the city $661,000 annually in water pumping and treatment costs.