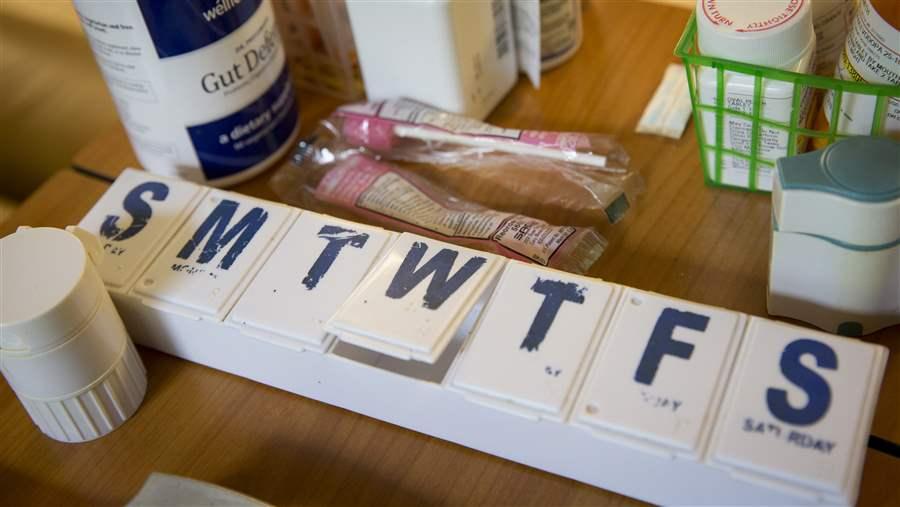 Iraq war veteran Doug Mercer had been home in McAlester, Oklahoma, for just four days when he was in a motorcycle accident that left him broken and brain-damaged. His wife Michelle became his caregiver after he left the hospital, but nobody there explained how to transport him safely.  A few weeks later, Michelle struggled as she tried to get Doug from the car to his wheelchair, breaking his leg.

“They’re sending you home, and you’re thinking, ‘What?’ Nobody instructs you, and says, ‘This is what’s coming home with you and how to use it,’” she said.

The Mercers’ story was a driving force behind an Oklahoma law that took effect in November that requires hospitals to train a designated family caregiver to tend to the medical needs of a released patient. Since then, 12 more states (Arkansas, Colorado, Connecticut, Indiana, Mississippi, New Hampshire, New Jersey, New Mexico, Nevada, Oregon, Virginia and West Virginia) have approved similar laws. In Illinois and New York, legislation is awaiting the governor’s signature.

As many as 42 million Americans take care of a family member at any given time. Traditionally, family caregivers provide assistance with bathing, dressing and eating. They shop for groceries and manage finances. But as the number of elderly Americans with chronic conditions has grown, family caregivers have taken on medical tasks once provided only in hospitals, nursing homes or by home care professionals.

In an AARP survey released in 2012, nearly half of family caregivers said they administered multiple medications, cared for wounds, prepared food for special diets, used monitors or operated specialized medical equipment. Despite frequent emergency department visits and overnight hospital stays, few of the respondents reported receiving any assistance or training from health professionals.

“Family caregivers are (often) not given any information about how to care for loved ones at home,” said Elaine Ryan, vice president of state advocacy and strategy for AARP, the leading advocate for the legislation. Ryan said the lack of instruction adds to the burden of the caregivers and makes it more likely the patient will be readmitted to the hospital, which is expensive and poses additional health risks (of infection, for example).

In a number of cases, the lawmakers sponsoring so-called CARE (which stands for Caregiver Advise, Record, Enable) bills have personal experience as caregivers. Democratic state Rep. Chris Walsh of Massachusetts, who is sponsoring a CARE bill in his state, tended to his late mother in his home. Now Walsh’s father, who has Alzheimer’s, lives with him.

“We have an aging population, and people are looking ahead and going, ‘Hmm, it might be good to have something in place by the time they get there,’” said Walsh, noting the influence his parents’ needs have had on his perspective.

State Rep. Mitch Greenlick, the sponsor of the Oregon CARE legislation, also cited his own experience in arguing for the bill. When Greenlick’s wife had hip replacement surgery a couple of years ago, the Democrat, who at 80 is the oldest member of the legislature, was her caregiver. Several years before that, Greenlick had emergency knee surgery, forcing him to travel to the statehouse in an ambulance and then on a gurney to cast the deciding vote for House speaker. During his recovery, his wife was his caregiver.

“We’ve had a fair amount of experience in the informal caregiving process,” Greenlick said.

John Schall, CEO of the Caregiver Action Network, a nonprofit that aims to educate and support caregivers, said experiences such as Walsh’s and Greenlick’s are “kind of a secret driving force” behind the success of CARE laws.

While the laws and legislation differ in some details, all contain three requirements:

At first, state hospital associations were wary of CARE laws, which they viewed as a new mandate that might be expensive to implement. The New Jersey Hospital Association, for example, was worried about a requirement that hospitals conduct the caregiver training 24 hours before discharge. Working with AARP, the association got that and other requirements loosened and ended up not opposing the bill.

The Oklahoma Hospital Association withdrew its opposition to that state’s CARE legislation after similar amendments were made, said Lynne White, the association’s director of government relations.

AARP’s Ryan noted that hospitals have a financial incentive to help keep patients from coming back: Under the Affordable Care Act, acute care hospitals with high readmission rates (within 30 days of discharging the patient) can be penalized with lower payments.

One of the factors contributing to high readmission rates is inadequate coordination and follow-up care in the community, according to the federal government. A 2013 report by the Robert Wood Johnson Foundation found that in 2010, one out of eight Medicare patients was readmitted to the hospital within 30 days after surgery. For non-surgical patients, the percentage was nearly one in six. The numbers do not include readmissions for Medicaid and private insurers, which Ryan estimated are also “high.”

Ryan and Schall said it is too early to determine the impact of the CARE laws on hospital readmissions, since the first one, Oklahoma’s, has been in effect for less than a year.

Some health care providers still harbor some concerns about CARE laws. The Healthcare Association of Hawaii, a 160-member organization representing acute care hospitals, assisted living facilities and other institutions, opposed CARE legislation there, arguing that it would be costly and potentially risky to both patients and hospitals.

Lay caregivers aren’t screened or necessarily qualified to take on medical tasks, George Greene, the association’s president and CEO, said in a statement. He estimated the CARE bill—which the Hawaii Legislature failed to pass before it adjourned in May—could cost the state’s hospitals between $2 million and $5 more a year. Institutions also must worry about legal problems if a family caregiver mishandles medical treatment, he said.

“The bill opens the door wide for hospitals to be held responsible for the actions, or inaction, of caregivers after the patient is discharged,” Green said in the statement. “(If) the patient suffers adverse health consequences for lack of appropriate care at home … the hospital could now be sued for inadequate care by family members and friends in the home.”

Sponsors of the successful legislation said liability was not an issue for their states’ hospitals. The bigger looming crisis was a dearth of potential caregivers for an aging population determined to age at home, they said.

“The system of everybody sort of staying in hospitals or rehab is really not sustainable,” said Walsh, the sponsor of the Massachusetts CARE bill. People—including Walsh’s father—want to live at home, and “it is an amazing amount of work” for the family, he said. “We really have got to think about these support systems and of supporting the people” who provide unpaid caregiving to loved ones, he said.

Greenlick put it more succinctly. “It’s just so damn obvious. I don’t know why in 2015, you need a bill,” he said.