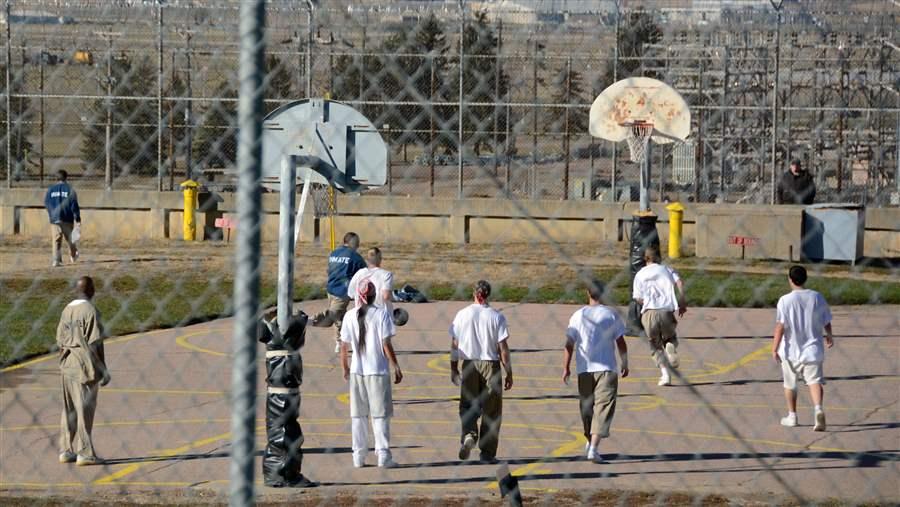 Inmates play basketball at the South Dakota State Penitentiary. Under Republican Gov. Dennis Daugaard, South Dakota has reduced its prison population by placing nonviolent offenders in probation programs and drug courts rather than behind bars. (AP)

The U.S. has the largest prison population in the world, even as crime rates continue to drop. Of the 2.2 million inmates incarcerated in the U.S., 57 percent are in state prisons and 33 percent are in local jails, costing states billions of dollars. Between 1986 and 2012, state spending on correctional facilities, probation and parole increased 427 percent, from $9.9 billion to $52.4 billion, according to the National Association of State Budget Officers.

In response, states increasingly are scrutinizing all aspects of their criminal justice systems to reduce and manage prison populations, cut the cost of corrections and reduce recidivism.

South Dakota’s imprisonment rate rose faster than the national average between 2001 and 2011, according to the Pew Charitable Trusts (Pew also funds Stateline). In 2012, Republican Gov. Dennis Daugaard and his legislative allies set out to change that.

The effort resulted in the Public Safety Improvement Act of 2013 and this year’s Juvenile Justice Public Safety Improvement Act. The 2013 law helped the state avoid building two new prisons, which would have cost $224 million. This year’s measure is expected to reduce the number of juveniles placed in detention by half over the next five years, for a savings of $32 million.

Daugaard, now in his second term as governor, sat down with Stateline to discuss the new laws and what he hopes they will achieve.

Q: Criminal justice reform is the signature legislation of your tenure as governor. Why did you take it on?

A: When I was running for governor in 2010, I would hear that South Dakota’s incarceration rate was much higher than North Dakota, and we’re similar states. At the time, I doubted it. But after I was elected, I found out that it was true. It’s higher than our surrounding states. So then I thought, ‘Maybe this makes us safer. We lock up more bad guys.’ But our crime rate wasn’t going down. It just confounded me. At the rate of our incarceration, we were going to have to spend some serious money on a women’s prison, and after that, a men’s prison. We were going to fill our prisons.

Q: Why was the incarceration rate so high?

A: Mostly, we were locking up nonviolent offenders at an increasing rate. We saw 80 percent of our admissions were for nonviolent offenses. When you think about it, we want to incarcerate people we are afraid of, violent people or career criminals, not people we are just angry with. There are more effective and less expensive ways to hold drug offenders accountable without putting them in an expensive prison that does nothing to address their underlying addiction.

Q: Was your impulse to do this coming from an economic perspective? You have a reputation for being frugal.

A: It was certainly something I waved the flag about. Among the more conservative folks in the legislature, they needed something to hang their hat on. And I knew that this was something they could hang their hat on. If someone said, ‘Dennis, you’re being soft on crime,’ I could say, ‘I’m being smart on crime. I’m trying to save you money.’ But it was also appealing to people to help people.

Q: How did you win people over?

A: We engaged a lot of the opponents. We involved them in the policy decisions and in the fact-gathering process. To the extent they had misconceptions that weren’t founded in fact, those misperceptions were dispelled. Everyone started with an understanding of what the real facts are: What are the drivers of incarceration? What can we learn from other states? We had sheriffs, judges, legislators, the chief justice involved in the process. Opponents that could be bombastic became our supporters, our endorsers.

Q: What was the biggest point of contention among those who originally didn’t support the legislation?

Q: What are some of the changes you enacted?

A: We did a number of things with policy. We changed the way drug offenses are treated. We increased penalties for people who are serious traffickers. For those low-level crimes like petty theft, we embedded in the statute a presumption of probation to discourage judges from putting people into prison as a habit. We also need to give them alternatives. If judges can’t put them in prison, we’ve got to give them something else to do. We greatly expanded drug court. We have an accountability system, where offenders have to blow into a Breathalyzer every day.

Q. What happens if they slip up?

A: If they slip up, it’s not a fall-off-the-cliff thing where you go to prison. On the back end on parole, the same thing is done for transgressions. In the past, we always had a stick: If you violate parole, you go back to prison. Now we have a carrot: If you perform the conditions of your parole perfectly for 30 days, you get 30 fewer days of supervision. We have negative reinforcement with graduated sanctions, and positive reinforcement for perfect compliance. It takes more people off parole sooner. The likelihood that they’ll violate probation and go back to prison goes down.

Q: What results have you seen?

A: It’s still early. This is kind of a long game. We don’t know with certainty that these systems will all work. But early indications are they’re all working. We’re hopeful. Our population in the women’s prison has actually gone down a little bit. The men’s population we expected to rise, but it’s flattening a little bit.

A: Based on the lessons learned, we undertook a study of the juvenile justice reform process. Juveniles who were not violent were being committed to the department of corrections at a higher rate than the nation. We have one of the highest rates of juvenile commitments in the country. Just like the adults, we needed to invest in treatment programs for those who had drug and alcohol abuse issues. And we needed to try to discourage the judiciary from committing lower-level offenders to some institution.

Q: Any regrets? Any mistakes you feel like you’ve made along the way?

A: I don’t have any. I think it’s been a resounding success in terms of our ability to enact policy.

Q: Going forward, what gains are you hoping to achieve?

A: We’re already seeing the gain of avoiding prison construction. We were looking at over $200 million and two different prisons. Prisons are very expensive to build. The women’s prison would have been on track right about now. That’s a big savings. I also think in terms of individuals’ lives. You think about the person who has an addiction. They don’t want to be addicted. To the extent we can help them with programs, develop a discipline, gosh, that’s the most important thing. It’s great to save money, but to get people who are contributing to society back on track? That’s what really matters.