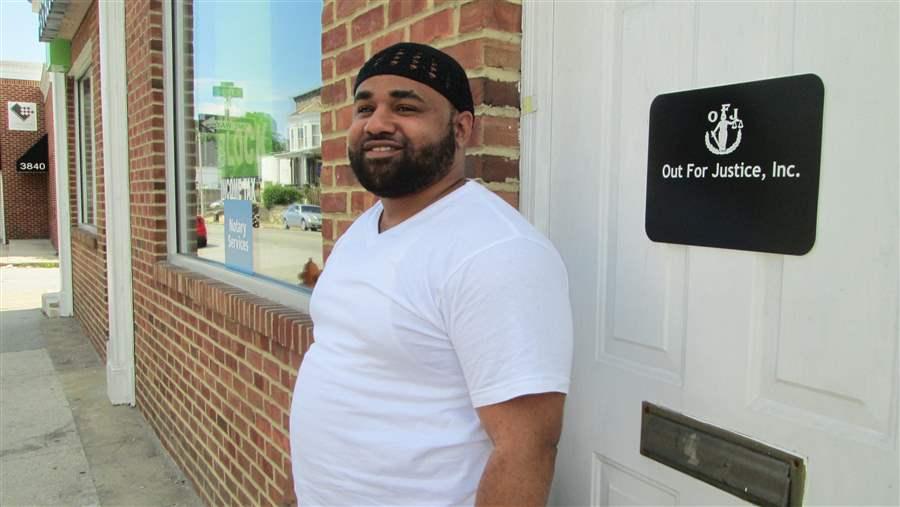 Raymond Daughton waits for his mentor at the Out For Justice Office in Baltimore, Maryland, where he has been receiving guidance since getting out of prison. (Rebecca Beitsch/Stateline)

Raymond Daughton has been out of prison for 36 days. When he got out he was homeless, had no clothes and no money.

All his belongings from his old apartment have disappeared. Daughton, 31, doesn’t want to get into trouble again, so he is staying out of his old neighborhood—one of the roughest parts of Baltimore—and distancing himself from some friends.

The past month has been a struggle of moving from couch to couch, scrounging some cash for a suit and tie, and applying for as many jobs as he can. Getting a job consumes him. He doesn’t care what he does; he just wants to earn enough money to gain custody of his two boys and support them.

But he’s worried no one will want to hire someone with a conviction for handgun possession who also served a previous prison sentence.

An estimated 70 million people are trying to navigate the world with a criminal record, according to the National Employment Law Project. Some states, concerned with the high costs of keeping people locked up, are reevaluating and removing some of the roadblocks that ex-offenders face when they are released. The goal: to increase the chances they’ll succeed in society and lessen the chances they’ll return to prison.

According to the American Bar Association, there are over 45,000 laws on the books restricting people with criminal records, ranging from about 300 in Vermont to over 1,800 in California. These “collateral consequences” can bar people with certain convictions from public housing, from voting and from certain jobs, such as veterinarians, real estate agents or other occupations that require state licenses.

In Daughton’s case, Maryland can deny public housing to those convicted of violent crimes within the last three years. The barber’s license he hopes to get also could be denied because of his felony conviction.

But many states are now re-examining the consequences of the laws and taking other steps to reduce the collateral damage of having a criminal record.

Seventeen states, including Maryland, have adopted so-called “ban the box” statutes that bar public employers from asking about criminal history on their job applications. Six of those states— Hawaii, Illinois, Massachusetts, Minnesota, New Jersey and Rhode Island—have extended the requirements to private employers.

Since 2009, nine states and the District of Columbia have begun to give ex-offenders so-called certificates of rehabilitation that say the person has completed prison time, played by the rules since being released or would be suitable for employment. The goal is to help ex-offenders get a job.

In many states, the certificates are coupled with employer liability statutes that say businesses cannot be held liable for negligence in knowingly hiring a person with a criminal record.

In some states, judges are allowed to remove some collateral consequences during sentencing by reducing or removing a bar to licensing, housing or other roadblocks offenders would face when they get out of prison.

Many states have relied on expunging or sealing the records of those convicted of some misdemeanors and minor felonies to help give them a fresh start.

But Richard Cassidy, who helped write a model law that many states are adopting in removing hurdles to re-entry, said many people are unsure whether they need to disclose an expunged record when applying for jobs, and they fear the consequences if the information is discovered later.

“Expunging statues, I’m not a fan,” said Cassidy, a Vermont lawyer. “I don’t think they work well this day and age because if you get convicted today, that will be all over the Web tomorrow. No one can make that go away.”

Sharon Dietrich, litigation director for Community Legal Services of Philadelphia, favors the clean slate approach, saying many employers are not willing to look past a criminal record. She said most ex-offenders would rather have their records expunged, not reveal their convictions on job applications and risk an employer finding out later.

The federal government has been encouraging employers to be more forgiving. The U.S. Equal Employment Opportunity Commission in 2012 issued guidance to employers that they should not have a blanket ban on hiring people with criminal records, since they could possibly run afoul of laws prohibiting racial discrimination. Instead, employers should consider how old the conviction is and whether the crime would be substantially related to the job duties.

Despite the guidance, people with criminal records often struggle to find work. And that’s prompted some states to begin issuing the certificates of rehabilitation.

The certificates come with a variety of names (some are called “certificates of employability”) and different qualifications for getting them. Some states issue them on completion of sentence. Others require ex-offenders to spend several years proving good conduct.

Cassidy prefers to allow judges to decide whether to remove some re-entry barriers so that people can find work, not be banned from getting financial aid for an education or kept out of some schools. Then, he said, ex-offenders should have to prove over five years they deserve a certificate.

Exactly how long ex-offenders should have to prove they deserve certificates is a point of debate.

State Sen. Bill Seitz, a Republican, who sponsored Ohio’s 2012 law granting certificates of employability, said the certificates can help reduce recidivism and shouldn’t take more than a year to earn. Ohio corrections officials grant certificates to well-behaving prisoners upon their release. But ex-offenders who were released before 2012, have to petition judges for the certificates and demonstrate for a year that they are worthy of them.

Stephen Johnson Grove, the deputy director of Ohio’s Justice and Policy Center who helped write the Ohio certificate law, said that 300 people have now successfully gotten certificates from the courts.

Finally, there are ban the box laws, which prevent businesses from asking about criminal records on the application. But the laws don’t bar employers from doing a background check, or asking potential hires about their records in follow-up interviews or when a job offer is pending.

“The idea is that you can at least get a face-to-face interview and be considered on merit, not on your record,” said Alison Lawrence, a senior policy specialist on criminal justice for the National Conference of State Legislatures.

When Durham, North Carolina, banned the box in 2011, the city’s hiring of people with a criminal record increased from 2 percent to 15 percent by 2014, according to a report from the Southern Coalition for Social Justice, which advocates for criminal justice reform.

Getting Out of Trouble

Rick Jones of the Neighborhood Defender Service of Harlem in New York City said his organization is one of the few nationally that tries to help people with convictions deal with the ramifications their records have on their lives.

That means representing people in family court and housing court. In New York City, even misdemeanors can bar someone from public housing for up to three years, Jones said.

“It’s the everyday stuff. It’s the mother convicted of shoplifting or possession of a controlled substance that 10 years later can’t go on a field trip with her daughter’s class,” he said.

A similar situation has played out for Diamonté Brown of Baltimore. After getting caught with marijuana, she was convicted in 2009 of a misdemeanor shortly before starting a master’s degree in education.

Brown said the conviction barred her from getting a job with the Baltimore school system and left her with few job opportunities after she got her degree.

“I couldn’t do anything I was trained to do,” said Brown, who has since gotten her record expunged and now is the director of Out For Justice in Baltimore, an offender-led organization promoting changes to policies that can stand in the way of ex-offenders returning to society.

Out For Justice is where Raymond Daughton turned for help when he first got out of prison. The group has helped him with his resume and in looking for jobs. He is still looking for work, for a permanent place to live and a way to go to trade school.

“I’m basically trying to raise my kids and stay out of prison. I’m 31, and it’s sad I’m just figuring that out,” he said. “It’s so easy to get into trouble but so hard to get out of.”