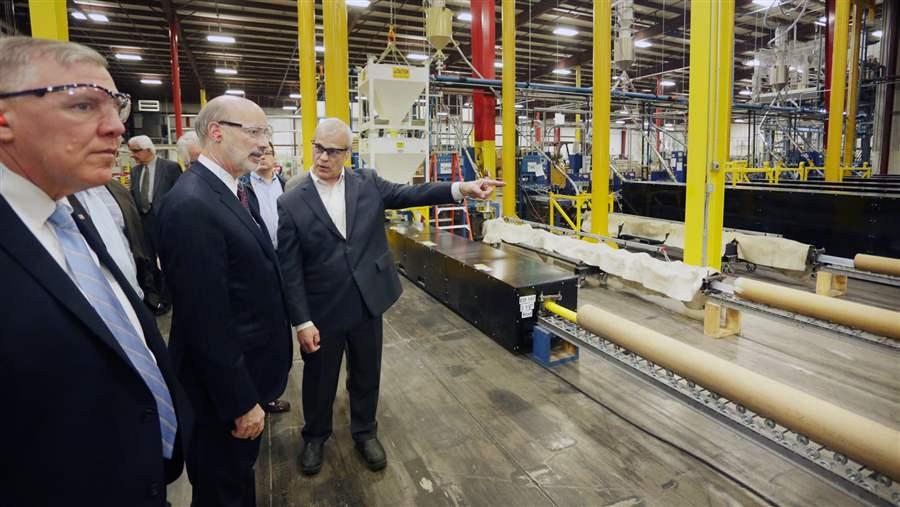 Democratic Gov. Tom Wolf of Pennsylvania, center, tours a Scranton plastics plant. Because of low energy prices, many states have seen an increase in manufacturing of nondurable products such as plastics. (AP)

The plunge in oil prices may be taking a toll on some states’ economies, but lower energy costs also are spurring a surge in manufacturing in many states.

“Cheap natural gas has helped lower costs for producing plastic, fertilizer, and steel,” said Mark Perry, a professor of finance and business economics at the University of Michigan.

The change can be seen in new gross domestic product, or GDP, numbers for states released last week by the U.S. Department of Commerce Bureau of Economic Analysis (BEA).

Forty-one states experienced economic growth in 2014 compared to the year before, when measuring GDP per capita and adjusting it for inflation. It was down in nine states and the District of Columbia, according to a Stateline analysis of BEA figures per capita. The per capita figure, which is a state’s GDP or economic output divided by the state’s population, can make it easier to compare states with varying populations.

When not measured on a per capita basis, only Alaska and Mississippi showed declines in real economic output last year, the BEA reported. Some states with fast-growing populations, such as Nevada and Virginia, achieved real GDP growth last year, but showed a decline when measured per capita. Their economic growth wasn’t sufficient to cover their increase in population.

The manufacturing of nondurable goods, such as plastics and chemicals, was a major factor in driving the growth across the states. As a category of economic activity, it increased 4 percent nationally in 2014 compared to 1 percent the year before. The increase was consistent across the country and was the largest growth factor in the Great Lakes region, which includes Illinois, Indiana, Michigan, Ohio and Wisconsin. Nondurable goods manufacturing grew 5 percent in the region.

Chemical manufacturing, fueled by low natural gas prices, helped drive the growth. Natural gas is a building block for many fertilizers, chemicals and some plastic products.

Nowhere was the growth more apparent than in Louisiana, which saw 12 percent growth in nondurable manufacturing from 2013 to 2014. In southern Louisiana, about $50 billion in investment in chemical plants along the Mississippi River has been announced in the last several years. As a result, the state’s economy has experienced one of the biggest turnarounds. Its per capita GDP grew 1.4 percent after shrinking by 3 percent in 2013.

But natural gas-fed industries are scaling up all over the country, with 105 new plants approved in the last three years, according a January report from Yale Environment 360, a publication of the Yale School of Forestry & Environmental Studies.

Oil was not a major factor in states’ growth nationally, according to the BEA. But it continued to boost some of the fastest-growing state economies last year — Colorado, North Dakota, Texas, West Virginia and Wyoming — before oil prices began plummeting at the end of the year.

Alaska, one of the nation’s largest oil-producing states, saw a drop in its GDP because of reduced output in the North Slope area, the BEA said. Oil production there dropped to a low of fewer than 12 million barrels a month in August from a peak of 63 million in 1988.

The damage low oil prices will have on the economies of oil states is hard to predict. Prices dropped from more than $100 a barrel to near $50 a barrel by the end of 2014. They have recovered only slightly since then, to about $58 a barrel as of June 8.

An April report from the Federal Reserve Bank of Dallas said low oil prices are likely to continue to help most states, but harm North Dakota, Texas, Wyoming and other states dependent on drilling.

A drop in the prices of corn, wheat and soybeans, and a decline in forestry spurred a drop in those categories for several Plains and Midwestern states.

“The record high (price for crops) was two years ago and they have come down since then,” said Greg Thessen, director of the U.S. Department of Agriculture’s agriculture statistics office for the Upper Midwest.

Forestry has been declining since 2000, as printed products lose importance and industries like furniture making move overseas, according to a USDA Forest Service report in 2013. There has been a modest rebound in wood prices recently in Minnesota, said David Haugen of the Forest Research Northern Station in St. Paul.

Other states have seen growth in the professional, scientific and technical services sectors. Their growth was a leading factor in the rise in GDP in New England and the Far West regions, according to the BEA.

A few states — Alabama, Idaho, Michigan, Minnesota, Oregon, South Carolina and Tennessee — saw growth in the manufacturing of durable goods such as machinery and cars.