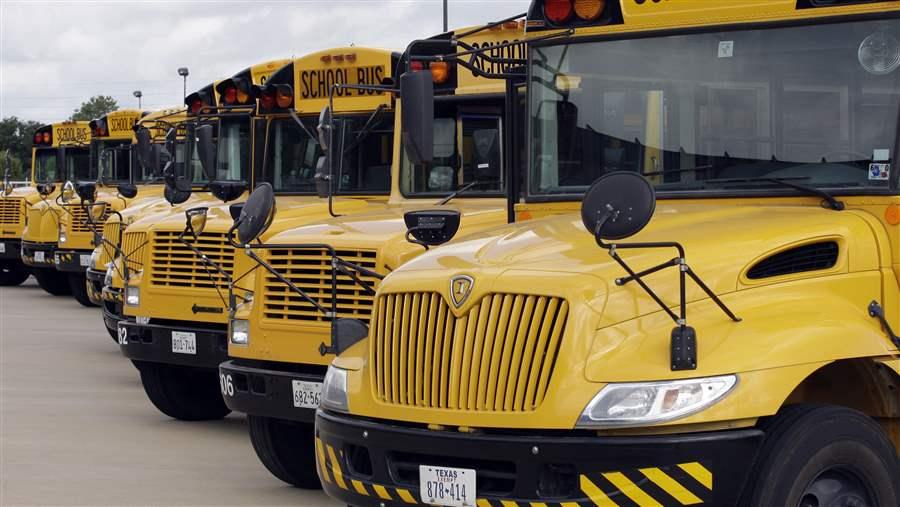 Some school districts are billing parents for bus service to offset budget shortfalls. The move has angered parents in some communities and worried some school officials, who are concerned about children’s safety and access to education. (AP)

It used to be that when children hopped onto a yellow school bus to get to and from their classes, taxpayers picked up the tab.

“It’s a trend that started back in ‘08 when the recession hit,” said Dan Domenech, executive director of AASA, The School Superintendents Association. “School districts’ budgets were cut back severely. As an alternative to cutting a lot of programs, districts went the route of charging fees for sports events, uniforms, after-school activities—and eventually transportation.”

State funding for education has declined during the last seven years. A report in October by the Center on Budget and Policy Priorities, a Washington research group, found that at least 30 states were providing less funding per student last year than they did before the recession. Fourteen of the states cut that funding by 10 percent or more. Nationwide, school districts receive about 45 percent of their funding from the state. Local government contributes about the same percentage.

The move to charge for bus transportation has angered parents in some communities and worried some school officials about children’s safety and access to education.

“When the budget hammer drops on pupil transportation, it’s usually children and their parents who take the hit. That’s just really unfortunate and a shame,” said Mike Martin, executive director of the National Association for Pupil Transportation, which represents school transportation directors.

Martin said that most school districts don’t typically charge bus fees to make money; they do it to compensate for or offset a budget shortfall.

“It’s being driven by the budget challenges we’ve had in the last decade,” Martin said. “It’s been happening more and more.”

California and Massachusetts are among the states where some districts are billing parents for bus service. In Hawaii, the education department runs the state’s single school district and charges for bus transportation.

Fees vary from district to district. The Jeffco Public Schools in Golden, Colorado, for example, charge $150 a child per year. Students in grades 7 through 12 in Franklin, Massachusetts, pay $325 each, with a cap of $975 per family. And the Poway Unified School District in San Diego County, California, bills $575 a year per child, with a cap of $1,437 for three or more children.

For years, school districts in a number of states have been charging parents for transportation as a convenience if they live within a certain distance from school, often two miles or less. Those who live farther away traditionally have gotten free bus service.

But shrinking budgets and higher transportation costs have pushed some districts to charge even if the students live far away.

“Our district is one of the lowest-funded districts in the state of California,” she said. “It costs $3.5 million a year to run the transportation program. The state only gives us $86,000.”

The Murrieta Valley district doesn’t provide bus service to high school students who live within three miles of school. For middle school students, the boundary is two miles; for elementary students it’s one. Parents of students living farther away who want bus service must pay for it.

Last year, the district took in nearly $280,000 from bus passes, according to Ortiz-Monson. “It’s a drop in the bucket when we’re looking at $3.5 million,” she said.

School districts don’t charge if students are disabled and qualify for transportation or are foster children or homeless. Some also offer discounted or free service to low-income families.

Ortiz-Monson said about a third of the nearly 1,600 students who use school transportation in her district ride for free because they are low income.

“Our board believes in transporting as many as they can,” she said.

No one keeps data on the number of school districts that bill parents for bus service. But a 2011 report by the Florida Legislature’s Office of Program Analysis & Government Accountability found that 12 states allowed districts to charge parents fees to transport their children to school. A 13th state, Hawaii, required parents to pay. Nineteen states prohibited such fees and the rest hadn’t established policies.

Most states that did allow fee-based school bus transportation gave school districts the authority to determine whether to do so and how much to charge.

The report found that districts reported some “negative consequences” as a result of charging for transportation, including declining ridership and parent complaints. Some schools experienced more traffic congestion because parents decided to drive their children to school rather than pay.

Michelle Winzent, president of the Colorado PTA, said those findings ring true in her state.

“Parents here in Colorado are feeling like they are being nickeled and dimed, period. Technology fees, book fees, athletic fees, and now bus fees. It’s really outrageous,” Winzent said. “It’s also creating these horrific traffic issues at the schools because everyone is driving and picking up their kids.”

“That definitely is a problem. It’s an inequity issue,” said Domenech of the school superintendents association. “That is why it’s such a difficult decision for districts to make. Whether you’re charging fees for books or equipment or transportation, it’s the children eligible for free and reduced lunch who are hurt by it.”

Charlie Hood, executive director of the National Association of State Directors of Pupil Transportation Services, said school buses provide “unparalleled safety,” and that any policy that reduces the number of riders will result in some children using less safe means to get to classes.

“Local and state policymakers should be aware of the facts regarding school bus transportation and weigh the potential for unintended consequences,” Hood said in an email.

At the Douglas County School District in Colorado, for example, parents were supportive of a program launched five years ago that charges fees, but also uses a real-time GPS tracking system to monitor students on the bus, said transportation director Donna Grattino.

“We began charging fees to offset the cost of providing safety and security to students,” Grattino said. “We’re a large district that covers over 900 square miles. Some stops are 26 miles from the school. It’s imperative to see where a student is and what bus they’re on and be able to track that, and parents recognized the value of that.”

The district charges $150 a year or 50 cents a ride for bus service. It receives about $1.9 million a year from the fees – only about 12 percent of the total cost of transporting students, Grattino said.

Domenech of the school superintendents group said he hopes that as the economy continues to improve, districts that have been charging fees will begin offering free transportation once again.

“We’re short-changing our children when we don’t provide the necessary funding for their education,” he said.