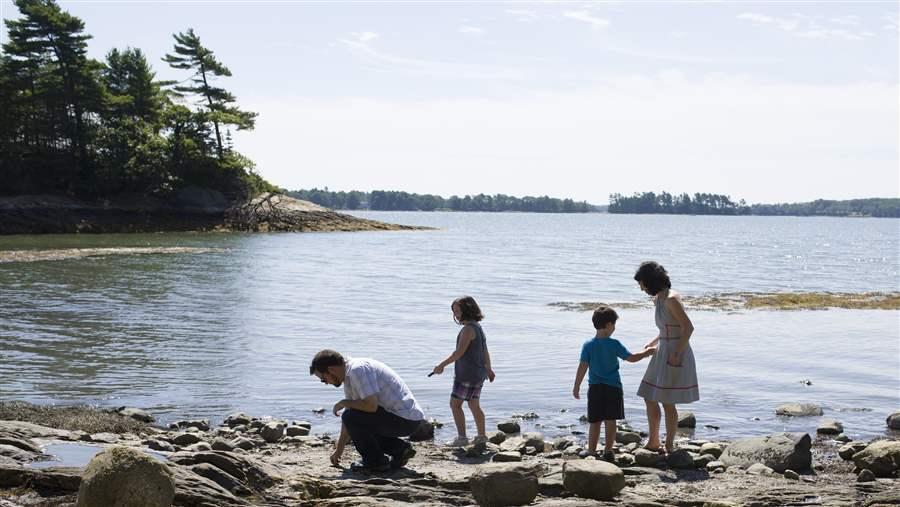 This story was updated to correct the range of state rental car taxes.

With one hand, states are beckoning tourists with elegant and evocative advertisements featuring sun-splashed seas and fragrant forests. At the same time, the states are extending the other hand — palm up — to take money from them in traveler taxes.

State lawmakers and governors often view high taxes on services, such as rental cars, hotel rooms and restaurant meals, as a painless way to let visitors foot some of the bill for state and local services. Some members of the tourist promotion industry also view the traveler taxes as a good thing because the proceeds frequently are directed to advertising to lure more visitors.

But travel industry analysts point out that big clients, such as groups holding conventions, try to steer clear of cities and states with high levies on meals, lodging and transportation because they see the taxes as unfair. And local residents don’t escape some of the pain, as they pay the traveler taxes when they go out for dinner or book a getaway hotel room.

In 2014, travel generated $2.1 trillion for the U.S. economy, supporting 15 million American jobs, according to the U.S. Travel Association. And states are willing to spend money to compete for that business because they view it as good for their economies and treasuries.

States aren’t alone in taxing travelers, according to the Global Business Travel Association (GBTA), which looked at the 50 most-traveled cities, where the combined tax bill for travelers was 58 percent higher than what residents would pay in normal sales taxes. Boston, Baltimore and San Jose increased them in recent years as did Connecticut and Minnesota.

“I think a big part of it is tourists don’t vote (where they visit),” said Mandy Rafool, a state tax policy analyst for the National Conference of State Legislatures (NCSL). “There’s a little more appetite for passing those types of taxes. You can make the case that tourists do put pressure on the infrastructure and that’s one way of making them pay for the resources they use.”

Joseph Bates, vice president of research for the GBTA, an industry group, looks at it from the other side. Tourists and business travelers already help local economies by spending money, he said, so “why would you want to assess taxes, especially in a discriminatory way?”

“When you have a daily fee on a rental car or a resort tax, it’s absolutely not fair,” Bates said “These travelers ... are helping the local economy and paying local sales tax. These are hidden taxes, and in many cases they are not advertised up front.”

Rental car taxes are a popular way to tax travelers. Seven states and the District of Columbia set the tax at 10 percent. Only eight states have no state tax on car rentals. But many also have local taxes on them.

In a 2013 report, GBTA listed three cities in Florida—Fort Lauderdale, Fort Myers and West Palm Beach—as having the lowest taxes on visitors. The group pegged Chicago, New York and Minneapolis as having the highest. 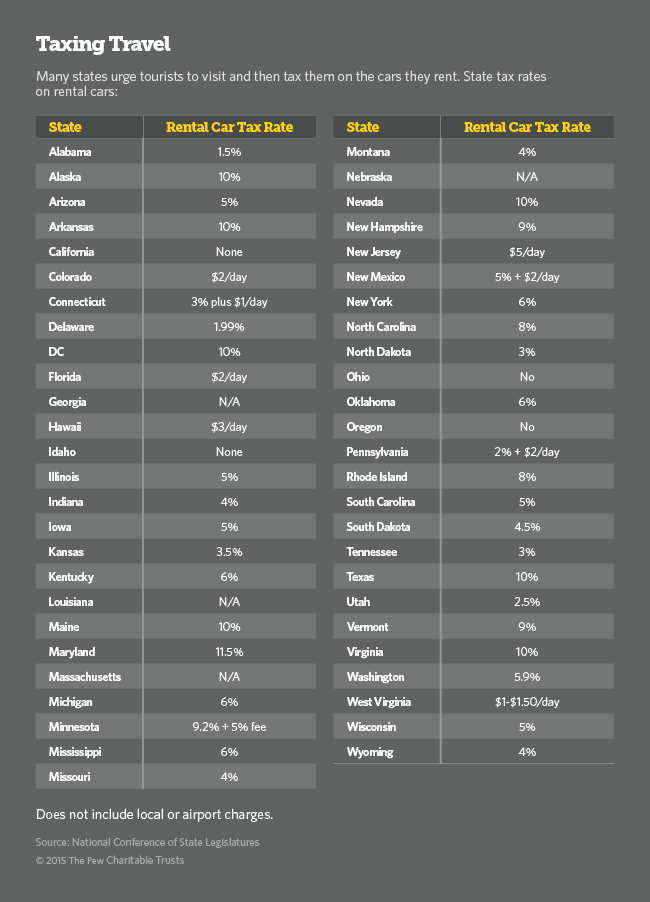 Taxing visitors you entice to your state can play well politically. In his fiscal year 2016 budget, Maine Gov. Paul LePage called for the reduction of state income taxes and cuts in other taxes on Maine residents, but proposed an increase in sales taxes. He argued that visitors don’t pay income taxes or property taxes but do pay sales taxes.

“The tax cut plan ensures more taxes are paid by tourists—not by Mainers. Only Mainers pay income taxes. But tourists pay sales taxes on almost every purchase they make,” LePage, a Republican, said in a pamphlet outlining this budget plan. “By modernizing the sales tax and lowering the income tax, while cutting spending, we ensure tourists pick up more of the tab.”

So far, the Maine Legislature has not agreed to lower the income tax the way that LePage wants, and is debating whether to raise the sales tax. But the state isn’t averse to taxing travelers. In 2013, for instance, Maine increased room and meal taxes from 7 percent to 8 percent and the sales tax from 5 percent to 5.5 percent.

Meanwhile, Maine has mounted a $2.5 million annual advertising campaign in New England, the Mid-Atlantic region and selected other states to try to attract more tourists.

Dubbed “The Maine Thing,” the ad campaign was designed by using travel and psychological surveys to appeal to three groups of people, according to Carolann Ouellette, director of the Maine office of Tourism: “balanced achievers,” “genuine originals” and “social sophisticates.”

Ads are targeted at each group. An ad featuring a family skipping along a beach, for example, is targeted at the “balanced achievers,” a category that includes relatively affluent families who are balancing work and family time.

The campaign seems to be working, Ouellette said, as Maine saw a 10 percent increase in visitors last year to 32.9 million. They contributed to $533 million in sales, consumption and use tax revenue, up from $471 million in 2013.

Ouellette said Maine isn’t in the only state that charges tourist taxes and then uses some of the revenue to try to lure more of them. About 5 percent of the state’s meals and lodging tax goes to the tourist agency, she said.

“I think many tourism budgets are based on some type of tax, whether it’s a general appropriation or a bed tax or a meals and lodging tax,” she said. “That’s how those budgets are funded. We are in a good place.”

In Georgia, the legislature passed and Republican Gov. Nathan Deal signed a bill in May adding a new tax of $5 per night on hotel and motel stays. The law directs the new revenue toward repairing roads and bridges, a significant twist to most tourist taxes.

According to a report by the Georgia Department of Economic Development, Georgia’s tourism industry grew 6.7 percent in 2014, and had a record economic impact of $57 billion. Despite worries by the Georgia lodging industry that visitors might choose to go elsewhere, Deal said the new tax was needed because the state’s infrastructure needs have trumped everything else. Among the alternatives considered and rejected by the legislature was an increase in the rental car tax.

Merry Hunter Hipp, Deal’s deputy director of communications, said the tax allows “those who visit our state to be part of the transportation solution.”

Potential visitors to Georgia can go to a website and see pictures of pristine Georgia beaches, white-water rafters and festival-goers. Deal’s fiscal 2015 budget called for $9.4 million for tourism promotion.

Meanwhile in Mississippi, the legislature  approved and the governor signed about a dozen bills this year that allow local jurisdictions to increase their tourist taxes, including a bill for Jackson County on the Gulf Coast, which would create a new 2 percent tourism tax on hotel and motel rooms if voters approve it.

Rep. Charles Busby, a Republican from Pascagoula who co-sponsored the bill, said the tax would help the county with its contribution to a regional tourist board that works to attract visitors to the Gulf Coast region with ads touting its location “overlooking the sparkling Gulf of Mexico.”

He said the estimated $600,000 to $700,000 in revenue would help pay for  infrastructure that would make the county, its beaches and casino gambling even more attractive to visitors.

“We’re kind of behind the times,” Blevins said. “Other coastal counties already have it. Any city you go to, Dallas or Houston or Atlanta, hotel taxes are common. We don’t see it as any kind of disadvantage. We feel that tourists that come here will be anticipating some taxes. They do in every city they visit.”