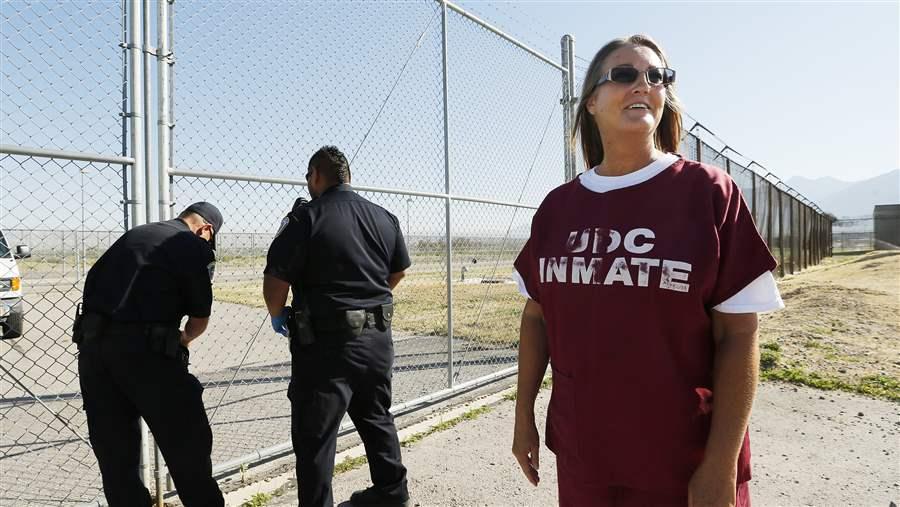 Inmate Colette Monahan waits to be released from the Utah State Prison in Draper last July. Utah passed a measure this year cutting probation time for prisoners who get treatment for mental illness and substance abuse after they are released. (AP)

Joe Calderon faced uncomfortably high odds of dying after his release from a California prison in 2010. According to one study, his chances of dying within two weeks — especially from a drug overdose, heart disease, homicide or suicide — were nearly 13 times greater than for a person who had never been incarcerated.

Despite suffering from hypertension during his 17 years and three days of incarceration, Calderon was lucky. He stumbled onto a city of San Francisco program that paid for health services for ex-offenders, and he was directed to Transitions Clinic, which provides comprehensive primary care for former prisoners with chronic illnesses. The clinic saw to all his health needs in the months after his release.

An increasing number of states are striving to connect released prisoners like Calderon to health care programs on the outside. Frequently, that means enrolling them in Medicaid and scheduling appointments for medical services before they are released. Some state programs — in Massachusetts and Connecticut, for example — provide help to all outgoing prisoners. Programs in some other states are more targeted. Those in Rhode Island and New York, for instance, focus on ex-offenders with HIV or AIDS.

Elsewhere, probation and parole are being used to encourage ex-offenders to adhere to certain treatments. Utah, for example, passed a measure this year that cuts probation time for former prisoners if they get treatment for mental illness or substance abuse.

The goal of these programs isn’t just to address the health needs of a notoriously unhealthy population, but to improve the likelihood they will succeed in society.

“We want to support them as much as possible to make sure they are productive and do not return to prison,” said Dr. Shira Shavit, executive director of Transitions.

Many ex-offenders who served long sentences were young when they were locked up and health care wasn’t a concern for them. While in prison, they didn’t have to worry about choosing doctors, scheduling appointments, or acquiring or managing their own medications.

“They are people who probably haven’t accessed health care outside of (emergency rooms) or anywhere,” said Jesse Jannetta, a senior research associate at the Urban Institute’s Justice Policy Center. “Oftentimes, they are people who have been diagnosed for the first time while in prison. On the outside, they don’t know where to go to access care.”

Calderon now helps them as a health care worker with Transitions, which operates 14 clinics catering to ex-prisoners in six states and Puerto Rico.

“Navigating the health care system can be confusing to the average Joe, let alone someone who has been locked away for many decades,” he said.

Until recently, many ex-prisoners had limited access to health care. It can be difficult for former inmates to find work, so many of them didn’t have health insurance through an employer. And most states didn’t allow childless, non-disabled adults to sign up for Medicaid, the joint federal-state health insurance system for low-income Americans.

The Affordable Care Act (ACA) changed that by extending Medicaid eligibility to all adults whose income is less than 138 percent of the poverty line. (For an individual, that’s an annual income of less than $16,243.) In the 29 states plus D.C. that have elected to expand Medicaid under the ACA, many released prisoners are immediately eligible for Medicaid.

But that doesn’t mean they all enroll in the program. That’s where many states, often in conjunction with nonprofits, have stepped in with programs like Transitions in California.

It isn’t possible for Transitions to make contact with all prisoners who are about to be released. So program staffers are out in the community looking for former inmates, hoping to enroll them in Medicaid and to direct them to the San Francisco clinic. “We find them in (emergency rooms), literally on street corners, in homeless centers,” said Shavit, Transitions’ executive director.

Shavit said clinics like hers cannot keep ex-offenders healthy if other aspects of their re-entry aren’t addressed, such as employment or job training, housing and transportation. Shavit said Transition Clinics across the country have seen about 2,000 ex-offenders since the first one opened in 2006 in San Francisco.

“For someone on insulin and homeless, with no refrigerator or access to food, it’s impossible to manage their disease successfully,” Shavit said.

Transitions tries to connect its clients to services that can help meet those needs, under the theory that doing so will help them stay healthy, drug-free and out of trouble.

Studies are underway to determine whether these efforts are paying off. But Massachusetts, which may have the most experience in trying to provide health care assistance to former inmates, offers some initial evidence.

Starting in 2008, when the program was fully implemented, prison officials began working with inmates six months before their release to ensure they were enrolled in Medicaid once they got out.

If a prisoner did not have a primary care doctor on the outside, officials assigned one who practiced in the community where the inmate planned to live and who accepted Medicaid patients. They linked inmates to health clinics with flexible hours, since former prisoners often lead chaotic, rootless lives when they return to society.

A 2011 study of the Massachusetts program found that nearly 80 percent of former inmates were continuously enrolled in Medicaid during the first year after their release. The study also showed that in that first year of the program, a significantly higher percentage of former inmates obtained medical and behavioral health services, when compared to the rest of the adult Massachusetts Medicaid population.

“We thought they might access mental health and substance abuse treatment and didn’t think they would also access primary care, but in fact they did,” said Warren Ferguson, one of the study’s coauthors and a professor of family medicine and community health at the University of Massachusetts, which ran the prison health services until recently.

The good news, Ferguson said, is ex-prisoners tended to use the emergency room more often for real medical emergencies rather than non-urgent health problems.

Since Massachusetts implemented the program, it has added other elements to its transition program. It now makes appointments for primary care and specialist visits prior to an inmate’s release. Those with HIV or AIDS are set up with case managers on the outside who help former prisoners make their medical appointments and manage their medications.

Patients with alcohol and opiate addictions who take anti-addiction medications are connected to substance abuse treatment centers. And the state’s Department of Health also provides some case management for some ex-offenders with mental illness.