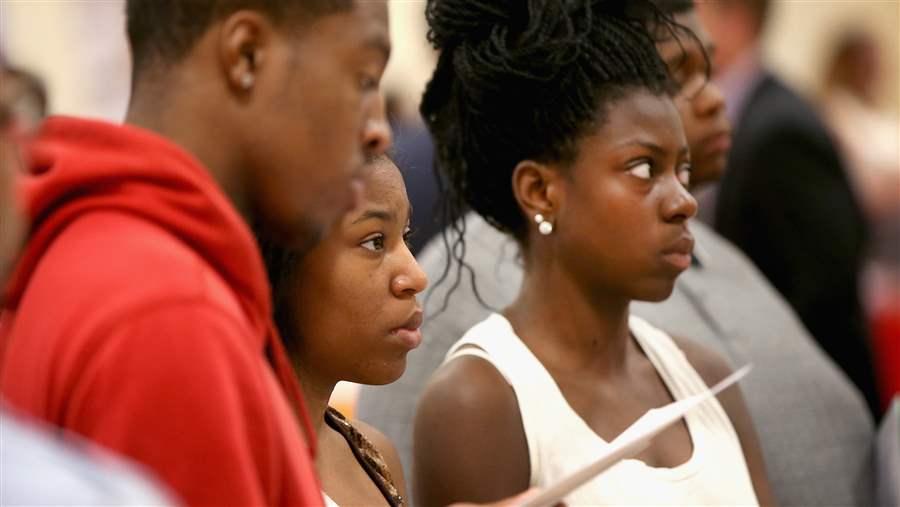 Job seekers listen to a recruiter at a jobs fair in Chicago last year. The unemployment rate for African-Americans has declined this year, but it still remains twice that of whites. (Getty Images)

Technically, the Great Recession ended six years ago. But while employment recovery from the recession has been slow for all Americans, among African-Americans, it has been doubly so.

In April, the unemployment rate for African-Americans dropped below 10 percent for the first time since early in the recession to 9.6 percent. It edged up a bit in May to 10.2 percent. Still, that’s far below its peak of 16.8 percent in the aftermath of the housing bust in March 2010.

Despite this improvement, the black unemployment rate remains double that of non-Hispanic whites—a pattern that has held firm since 1960, according to the Bureau of Labor Statistics.

In some states, it’s far worse than the national rate. The 2014 black unemployment rates in Wisconsin, Nevada and Michigan were 19.9 percent, 16.1 percent and 15.8 percent respectively, according to the Economic Policy Institute (EPI). In the District of Columbia, the black unemployment rate is more than five times that of whites.

Why is the unemployment rate so intractable in the African-American community?

The reasons are complex, researchers say, from job cuts in the public sector to the decline of the manufacturing industry to wage stagnation to discrimination. Mass incarceration in the black community also plays a role, since people with criminal records have a harder time finding work, according to Sarah Treuhaft, director of equitable growth initiatives for the Oakland-based think tank, PolicyLink.

What about the growth in recent decades of an educated black middle class?

African-Americans are more likely to be unemployed at every educational level than are white Americans, according to Treuhaft. “Young black college graduates have been particularly hit hard by the recession,” she said.

The rocky economy made middle-class blacks particularly vulnerable. They were disproportionately harmed when the housing bubble burst in 2008. For many, their futures are tied up in their homes rather than the stock market, according to a 2015 report by the Federal Reserve Bank of St. Louis.

Blacks also lost a big chunk of that wealth in the housing crisis. In 2010, the typical white household had $9,636 in financial assets (investments and retirement) and the typical black household has $141, researcher Clinton Key reported in the 2014 book, “The Assets Perspective.” (Key now works for the Pew Charitable Trusts, which funds Stateline.)

According to a December report by the Pew Research Center (Pew also funds Stateline.), white wealth is now 13 times that of blacks, compared to eight times that of blacks in 2010. When state budgets shrunk dramatically during the recession, black professionals, for whom the public sector was once a reliable gateway to the middle class, were disproportionately affected.

So how much did those state budget cuts affect black workers employed in the public sector?

Black public sector workers—­­teachers, school principals, police officers—were more likely to be laid off during the recession than were white public sector workers, according to William M. Rodgers III, a chief economist for the Heldrich Center for Workforce Development at Rutgers University.

What about black women?

Black women, who are more likely to work in education, have been particularly affected by cuts in public sector jobs, said Valerie Wilson, director of the EPI’s program on race, ethnicity and the economy. While overall unemployment rates among blacks is decreasing, it has remained unchanged for black women at just under 9 percent, Wilson said. The unemployment rate for black men dropped from 12 percent in December to 10.2 percent in May, Wilson said.

Just about all states cut education spending during the recession. Many states are trying to restore the funds, but few have reached pre-recession levels. According to the Center on Budget and Policy Priorities, at least 30 states spent less per student in the 2014-15 school year than they did before the recession hit.

Is black unemployment worse in some states than others?

Generally, the unemployment rate is higher in Rust Belt States, regions where plants and factories have been shuttered, replaced by service-sector jobs that pay much less, Wilson said. Southern states, where the majority of black Americans live, also continue to see high unemployment rates within the African-American community, Wilson said. The one exception: Virginia, the state with the lowest black unemployment rate in the U.S., at 7.4 percent.

Which states have made a point to target the black unemployment rate?

Some states and municipalities are taking a targeted approach to tackling black unemployment rates. In Missouri, community organizations pushed state officials for stronger local hiring policies associated with rebuilding highways, Treuhaft said. About .5 percent of that budget was set aside for workplace training for underemployed and disadvantaged workers, according to Treuhaft.

Traditionally, federal policies prevented local governments from requiring local hiring on projects funded with federal transportation money. A pilot program has lifted that restriction for one year. Thanks to the advocacy of former mayor Antonio Villaraigosa, Los Angeles is one of the early adopters of the program, using local hiring for about a dozen of its transit projects, according to Treuhaft.

Durham, North Carolina, joined a growing list of cities and states that have adopted a “ban the box” approach, removing the question about criminal convictions on its applications. In 2011, only about 2 percent of the city’s new hires had criminal records. In 2014, that number rose to 15.5 percent, according to PolicyLink. Four states—Hawaii, Massachusetts, Minnesota and Rhode Island—have banned the box for private employers, as well. African-Americans and Hispanics disproportionately have criminal records.

In September, inspired by a study that showed that 52 percent of black men of working age in New Orleans were jobless, Mayor Mitch Landrieu launched what he calls the “Economic Opportunity Strategy.” His plan—which for now is just that—would include collaborations with local skills-training providers, social service agencies, community advocates and some of the region’s largest employers, from the airport to hospitals to universities.