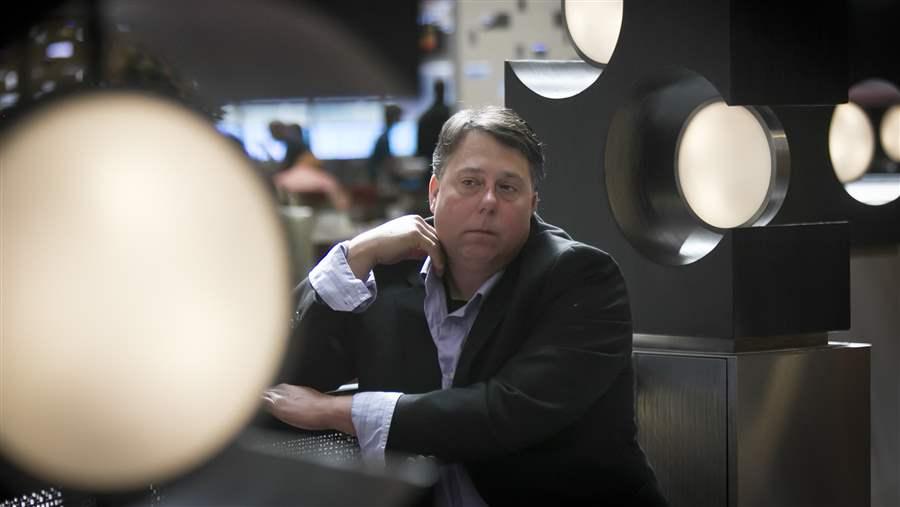 Jay Palmer, a former principal consultant for the Indian firm Infosys, told a U.S. Senate committee that U.S. workers are being squeezed out of jobs by lower-paid, temporary workers under the H-1B visa program. Many U.S. tech firms, governors and mayors want to expand the program. (AP)

A computer programmer from India was promised a $46,500 salary in New York, plus tuition to study for a master’s degree. Instead, his annual pay averaged less than $13,000 and his degree was withheld when his employer failed to make the promised tuition payments.

In California, veteran computer workers at a health care company say they were forced to train cheaper foreign replacements before being laid off, even though the replacements were hired under a program meant to fill critical jobs when employers can’t find qualified U.S. citizens or permanent residents who hold green cards to fill them.

Those are just two examples of the alleged abuse of the federal H1-B visa program for foreign guest workers. Tech companies, backed by many governors and mayors, want the federal government to expand the number of H1-B visas to fill high-skill jobs. But some labor advocates want to change or end the program, arguing that employers are exploiting it to find cheap, disposable labor.

Proposals to expand and overhaul the program are stalled in Congress amid a wider debate over immigration. In the meantime, some foreign workers who claim they were abused and U.S. workers complain they were unfairly displaced are seeking relief from state courts under state employment laws.

A New York state appellate court ruled in 2012 that the New York programmer, Nikhil Kaushal, was entitled to back pay and tuition under state law because the salary and tuition were written into the H-1B visa application. Despite the legal victory, Kaushal was never compensated because his employer didn’t have the money, said his attorney, David Lira.

In California, information technology workers at the health care company Molina have sued under state antidiscrimination laws, alleging they were unfairly replaced by H-1B workers. After several years of legal wrangling, the workers’ attorney, James Otto, said the case could come to trial this month.

At the same time, many governors and mayors support expanding the visa program to help firms in their states and cities find the highly skilled workers they describe as mission critical.

In 2013, 15 governors sent a letter to U.S. House members urging approval of the Senate’s comprehensive immigration reform bill along with more visas for foreign graduate students in math and science.

“The cap on these visas is always insufficient, and the shortage of workers often stymies productivity at our high-tech companies,” Democratic Gov. Jerry Brown of California wrote in a 2013 letter to Sen. Dianne Feinstein, D-Calif. Brown urged Feinstein to support an expansion of H-1B visas while also calling for more education funding to help with “filling our workforce needs domestically.”

Keeping the Best and Brightest?

H-1B visas allow an employer to hire skilled workers temporarily from overseas for three years at a time. The visas do not automatically lead to citizenship or green cards.

They are so popular that the U.S. Citizenship and Immigration Services said in April that it had received 233,000 applications for this year’s 85,000 private industry slots within days of opening the application process.

Many prominent tech companies say they use the program the way it’s intended: to get the best STEM (science, technology, engineering and math) graduates from U.S. universities, many of whom are foreign students, to help fuel the U.S. economy.

San Diego-based Qualcomm, the semiconductor giant, employs more than 20,000 engineers in its wireless technology operations. It would have to move some operations overseas without the H-1B program, said Alice Tornquist, vice president for government affairs.

“Like Google, Intel and others, we recruit from top U.S. engineering universities and graduate programs. Nearly half of the STEM graduates from these U.S. universities will need visas to stay in the United States after completing their education,” Tornquist said.

Facebook founder Mark Zuckerberg has editorialized in favor of granting more H-1B visas, asking, “Why do we kick out the more than 40 percent of math and science graduate students who are not U.S. citizens after educating them? Why do we offer so few H-1B visas?”

Tornquist acknowledged that the system can be abused, but that’s not Qualcomm’s goal.

“There are cases where companies are bringing people over from foreign countries on a truly temporary basis. We don’t do that,” she said. “We want them to work for us permanently and get a green card, but that can take 10 years. It’s crazy.”

Tornquist spoke at a June 2 conference underwritten by Qualcomm  in favor of a bill in the U.S. Senate that would raise the cap for private H-1B visas for college graduates from 65,000 to 115,000 and remove the current 20,000 cap for people with advanced degrees.

But many Americans with similar skills strongly oppose raising the cap. Russell Harrison, director of government relations for IEEE-USA, which represents 235,000 workers in the electrical and computer engineering professions, said it supports immigration but not temporary visas like H-1B.

High-skill jobs are supposed to create an economic multiplier effect, spawning more jobs in the communities where they are located.

In his book “The New Geography of Jobs,” author Enrico Moretti estimated that “for each new high-tech job in a metropolitan area, five additional local jobs are created outside of high tech in the long run.”  Carpenters, doctors, and hair stylists are examples of new jobs he cites.

The conservative American Enterprise Institute estimated in 2011 that hiring one immigrant with an advanced STEM degree from a U.S. university creates 2.6 jobs for U.S. natives.

But recent studies have shown that H-1B may not be having that effect.

A study released in April by the nonprofit National Bureau of Economic Research found that H-1B visa recipients tend to crowd out other workers, lowering wages and raising profits without increasing productivity.

A 2013 analysis by the Economic Policy Institute, a liberal think tank that supports low- and middle-income workers, found there are more than enough U.S.-born STEM workers to fill jobs here. The institute also has criticized abuses in H-1B, saying staffing companies use foreign workers to cut costs, knowing they are easy to intimidate because if they lose their jobs, they must leave the country.

The U.S. arm of Infosys, an international consulting, software and outsourcing firm based in India, paid the highest immigration fine on record, $34 million, after being accused by U.S. Immigration and Customs Enforcement of using travel visas as substitutes for scarce H-1B visas.

A whistleblower in that case, former Infosys consultant Jay Palmer, told a U.S. Senate committee considering H-1B expansion in March that he presided over several attempts by the company to replace higher-paid American workers.

“The only specialized talent these workers have is that they will work for low wages,” Palmer said.

A group of fired workers at Southern California Edison is also suing in federal court in an attempt to stop a program allowing spouses of some H-1B workers to work legally. Their attorney, John Miano, said it’s important to preserve limits on H-1B visas.

“The only real safeguard for American workers in the H-1B program is the annual limits. They limit the damage H-1B can cause,” Miano said.

A U.S. Government Accountability Office report in 2011 found that oversight of the H-1B program was “fragmented and restricted,” with only cursory review of applications. When studied by the Department of Homeland Security, more than one-fifth of the applications were fraudulent or included technical violations, the report said.

Some changes aimed at protecting both visa holders and American workers from abuse have been proposed, but haven’t gone very far. The 2013 Senate immigration bill would have required some companies to offer jobs to U.S. workers before hiring through H-1B. The House never took up the bill.

But abuse allegations increasingly are drawing attention. Last week, U.S. Sen. Bill Nelson, D-Fla., called on the Department of Homeland Security (DHS) to investigate the H-1B program after The New York Times reported about 250 Disney employees were laid off and many of their jobs were given to H-1B visa holders brought in by an outsourcing firm based in India. Some Disney employees had to train their replacements to do the jobs they had lost.

“I want to know if there are abuses going on in the system,” Nelson told DHS. “This program was created to help fill jobs where there were labor shortages, not to take jobs away from anyone.”