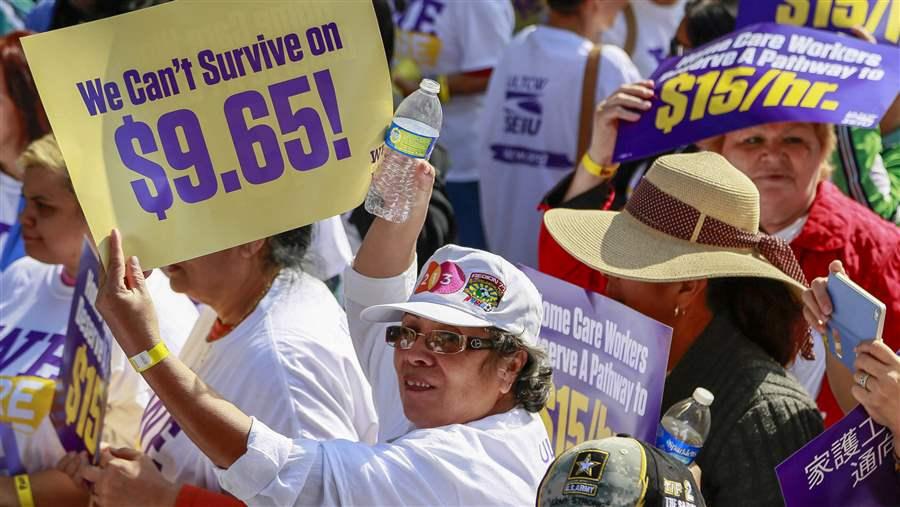 Home health care workers rally for better wages in Los Angeles. Many home care workers say they are not paid enough to cover their bills. (AP)

This story was updated to reflect the fact that Connecticut, Iowa, Maryland and Minnesota have signed onto the brief in favor of applying federal minimum wage and overtime rules to home care workers.

People working in one of the fastest growing professions in America aren’t well paid. Many of them don’t get health or retirement benefits. And federal minimum wage and overtime protections still don’t apply to them.

Despite the low wages and odd hours, 2 million Americans are home care workers, helping to dress, feed, and bathe the elderly and disabled within their homes. They are in high demand: The U.S. population is aging, and more seniors want to stay in their homes instead of moving to nursing homes.

Some states are trying to improve home care workers’ wages and benefits, aiming to attract and retain more skilled and dedicated workers in a high-turnover industry.  But other states are concerned about adding costs to their Medicaid programs, and some are in court fighting a 2013 U.S. Department of Labor regulation that would apply minimum wage and overtime rules to home care workers, who have long been exempt.

In Washington and Oregon, unions played a role in raising wages for home care workers in those states’ Medicaid programs. Montana and North Dakota used federal stimulus dollars to help fund increases. And in Maine, Democrats are pushing legislation that would raise the pay of home care workers to $15 an hour from $9 an hour, according to Democratic House Speaker Mark Eves, who is sponsoring the measure.

But Ohio has stripped home care workers of union bargaining rights, and has resisted giving them health benefits, arguing that they can get health care insurance on Affordable Care Act exchanges.

Meanwhile, the Department of Labor regulation that would extend overtime and minimum wage protections to home care workers has been tied up in court, with some states (Connecticut, Illinois, Iowa, Maryland, Massachusetts, Minnesota, New Mexico and New York) submitting briefs in favor of the rule but others (Arizona, Georgia, Kansas, Michigan, Nevada, North Dakota, Tennessee, Texas and Wisconsin) in opposition.

The national median hourly wage for home care workers in 2014 was $9.38. That is more than the federal minimum wage, but few home care workers receive overtime pay, health insurance, sick leave or paid days off. The workforce is mostly female and minority and many workers live near or below the poverty level, according to the Paraprofessional Healthcare Institute, which studies the home care workforce.

While many home care workers say they enjoy their work, they often struggle to make ends meet.

Patricia O’Hara of Queens, New York, who has been a home health aide for five years, is one of them. She began working in the field by taking care of her father, who had Parkinson’s disease. After he died, she decided to continue with the work because it felt meaningful. But she earns only $10 an hour.

“Taking care of other people is a good feeling and very therapeutic,” she said. “I’m poor now, but I find it very rewarding.”

O’Hara cares full time for one client, a prime gig in the world of home care work because she doesn’t have to lose time and money traveling between clients.

Care worker Agnes Maitland, 61, also of New York City, must juggle multiple clients. The Barbados native said between subway fare, low pay and unpaid hours between clients, she sometimes struggles to buy a bag of rice. She’s open to working as many as 60 hours a week but that doesn’t usually happen.

In addition to low pay and job instability, workers also can be injured on the job, often from lifting clients. But conditions are improving for O’Hara and Maitland: They belong to a local union that’s helped negotiate higher pay, and even some health benefits.

The fight over the stalled Department of Labor overtime regulations is indicative of a split over how to create a stable, high-quality home care workforce.

Unions representing workers favor the regulations. But Bill Dombi, attorney for the National Association for Home Care and Hospice, which represents home care agencies, said his members are concerned about home care remaining affordable. If state Medicaid programs don’t have enough money to pay workers overtime, he said, they may cut workers’ hours.

Even states that typically are friendly to unions or that offer more benefits to home care workers are concerned about the costs to Medicaid, the federal-state health insurance system for the poor.

In Oregon, former Gov. John Kitzhaber, a Democrat, wrote a letter to the Department of Labor last year asking for a delay in implementing the regulations. Paying workers overtime and for travel time between clients could cost the state’s Medicaid program $74 million over two years, he argued. According to Kitzhaber, the overtime rules might force Oregon to reduce hours for some workers, while some beneficiaries would have to start getting care from multiple workers.

Oregon is one of the higher-paying states for home care workers, at least within the Medicaid program, where they earn $13.75 an hour compared with the statewide median pay of nearly $11. Oregon’s workers also receive health insurance that includes vision and dental coverage, and four paid days off, which can be used as sick time, according to the state union that pushed for the deal.

But Dombi said few states are financially prepared for the regulation. He said only two states—New York and California—have set aside any money to comply with the rules, and in both cases it was only about two-thirds of what would be needed.

Kelly Buckland of the National Council on Independent Living, which advocates for people with disabilities, also opposes the regulations because of the impact they might have on workers.

Buckland said he’s worried some states may reduce higher pay to minimum wage and use the savings to cover overtime.  He’s particularly concerned by initial plans in Arkansas that would limit home care workers to a 40-hour week and only one client per day.

Buckland, a quadriplegic who relies on an attendant’s help 20 hours a week, said those regulations would make it difficult for his attendant to get enough hours, and he would probably have to hire multiple attendants. He said the situation is akin to a business that would hire a temp before paying overtime to permanent staff.

Buckland said his organization has long advocated for better attendant pay because it leads to a higher quality workforce. He just doubts the federal overtime regulations would deliver that.

“If this regulation actually required states to pay existing home care overtime and actually gave them the money to pay it, we wouldn’t be fighting this,” he said. “We think this is actually going to hurt the workers.”