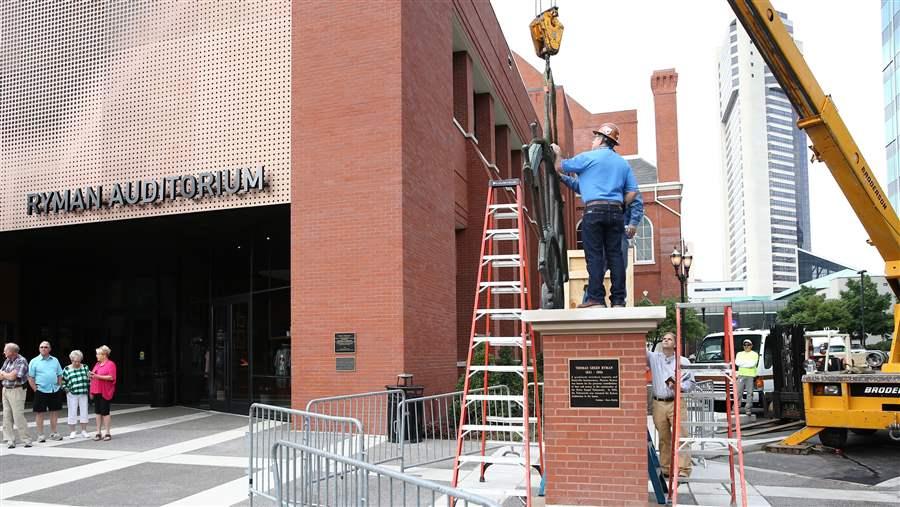 Workers hoist a statue as part of a $14 million renovation of Ryman Auditorium in Nashville, Tennessee. Tennessee's capital city is the only large metro area outside California and Texas to rank among the top five for job growth since the Great Recession. (Getty Images)

Five years removed from the worst of the Great Recession, employment in each of the nation’s biggest metro areas has bounced back from its lowest point of the downturn, according to a Stateline analysis of federal employment data.

In a dozen metro areas, employment has grown more than 15 percent since its lowest point of the Great Recession. Among the 50 most populous metro areas, the average job growth rate is about 11 percent.

To calculate job growth, Stateline identified the lowest employment level for each of the country’s largest 50 metro areas since January 2008 (the recession officially began in December 2007). The results show percentage of job growth from each region’s low point compared to its April 2015 employment level, the most recent number available.

Two metro areas stand out as the strongest examples of job growth: San Jose, California, and Austin, Texas, both of which have seen more than 22 percent employment growth since their low points in mid-2009.

Also in the top five are two other California and Texas metro areas: San Francisco and Houston, both with nearly 18 percent growth since their recession low points of August 2010 and December 2009, respectively. As Stateline has reported, California and Texas each has experienced particularly strong job growth statewide.

On the other end of the spectrum, in six metro areas employment has grown at half the national average or less. Those areas, in descending order of growth, are: Memphis, Tennessee; Buffalo, New York; Rochester, New York; Philadelphia; Virginia Beach, Virginia, and St. Louis.

In contrast, Rochester and Buffalo each had about 5 percent job growth since their low points in late 2009. Those rates are below the 8.3 percent employment growth for New York state as a whole during the same period.

Like the states, many of the metro areas share common low points of the Great Recession. Fourteen hit their nadir in February 2010, followed by seven in December 2009.

Detroit was the first metro area to reach its recession low point in June 2009. Employment there has increased 13 percent since.

Sacramento, California, was the last area to reach its low point, in June 2011. Employment there has grown nearly 11 percent since.