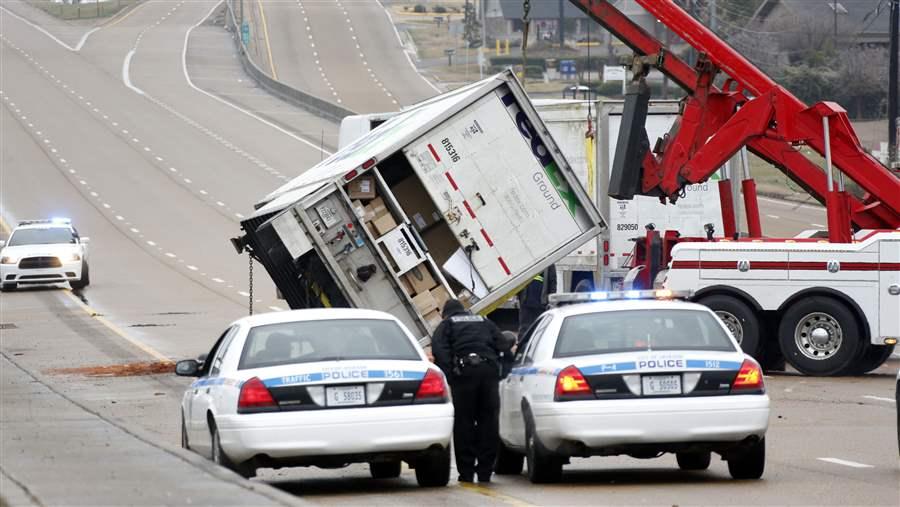 Police wait as a towing service attempts to right a trailer on Interstate 55 in Jackson, Miss. (AP)

An earlier version of this story included incorrect information from the International Towing and Recovery Hall of Fame Museum about the number of tow truck operators who have been struck and killed by a vehicle while working since July 2014. The correct number is 14.

In Oklahoma, a 30-year-old state trooper was killed and another officer seriously injured after a car struck them on a highway as they investigated an accident.

In Kentucky, a 25-year-old volunteer firefighter died and his mother, also a firefighter, was injured when a tractor trailer sideswiped a fire truck and hit them as they tried to put out a car fire on a highway.

And in North Carolina, a 44-year-old tow truck operator helping a family whose van had broken down was struck and killed by a car on the interstate.

In all three incidents, which occurred in the past 10 months, the drivers responsible failed to move over or slow down when they passed.

Speeding past emergency vehicles is an everyday occurrence on the nation’s highways, even though every state has a “move over” law that requires drivers to slow down or switch lanes when emergency vehicles are on the scene. Failing to heed the laws can result in fines and serious criminal charges if someone is killed.

Despite the laws, safety experts say many drivers remain ignorant of them and that states need to do a better job of educating motorists about what’s at stake.

“We have to do a better job of getting the message out,” said Jonathan Adkins, executive director of the Governors Highway Safety Association, which represents state highway safety offices.

All 50 states — but not the District of Columbia — have move over laws aimed at protecting police and emergency rescue workers. If a police car, fire engine or ambulance is parked on the road or shoulder and displays flashing lights, motorists generally must either move to the next lane if it’s safe, or slow to a safe speed. Some states define that as 20 mph below the posted speed limit. Others leave it to the driver’s discretion.

In July, Wyoming will become the 48th state to include tow truck operators in its move over law. Only Louisiana and New Mexico offer no protections to roadside assistance workers, such as tow truck operators, according to Russell Martin, state relations manager for AAA.

Since 2010, state legislatures have approved 44 new measures enacting or improving move over laws, Martin said. Some have strengthened existing statutes, such as clarifying when a driver must move over, or hiked penalties for violators. Others have added additional types of vehicles, such as tow trucks.

State Rep. Harlan Edmonds, a Republican, said he sponsored the recent Wyoming law to include tow truck operators after a number of near misses in his state. Wyoming already had protections for law enforcement and emergency responders, requiring drivers to move to the next lane if it’s safe or cut their speed to 20 mph below the posted limit.

“Tow truck drivers were out there every day and they had less protection. I wanted to extend that to them,” Edmonds said. “It also gives members of the public protection because they might be standing around next to their car with the tow truck driver.”

The Emergency Responder Safety Institute, a national advisory group of public safety and transportation experts, estimates that on average, six to eight fire rescue and EMS workers are killed working in or near moving traffic each year, as are 10 to 12 police officers. The institute says that about 50 tow operators are killed. It doesn’t break out how many of those cases involve victims who were struck because of move over violations.

There are no comprehensive statistics on emergency and roadside workers who die or are seriously injured on highways because motorists fail to move over. No single government body is responsible for collecting and maintaining that information.

A 2013 study prepared for the American Association of State Highway and Transportation Officials found that near-misses and deaths of those who work in and around highways are reported in different ways.

Some groups do some of their own tracking. The National Law Enforcement Officers Memorial Fund, for example, said its data shows that last year, six officers were killed in fatal crashes that appeared to involve move over violations.

“In this case, six lives could have been saved in 2014 if everyone had followed the law,” said Steve Groeninger, the fund’s communications director.

The International Towing and Recovery Hall of Fame Museum in Chattanooga, Tennessee, said that the museum's "Wall of the Fallen" memorial lists the names of 14 tow truck operators who have been struck and killed by a vehicle while working since July 2014.

“It’s a nationwide problem. It’s been ongoing for several years and it’s scary for our drivers,” said Jeff Roskopf, president of the Towing and Recovery Association of America, an industry trade group. “You never know when something’s going to happen, even if you’re just changing a flat tire.”

Transportation safety experts say that move over laws won’t have an effect unless the public is aware of them.

A 2007 survey sponsored by the National Safety Commission found that 71 percent of Americans had never heard of move over laws.

“You have to have a host of strategies,” said Adkins of the governors’ highway safety group. “These laws have to be very visibly enforced. And the public needs to be educated.”

Ben Gorban, project coordinator for the International Association of Chiefs of Police, said his group wants to raise awareness of current laws and the importance of abiding by them. It also aims to educate officers about where to position themselves during traffic stops to reduce their risk of being struck.

“If an officer is at the scene trying to investigate a crash or make sure that everybody is safe, they are not necessarily focusing on everything else around them,” Gorban said. “The last thing they need to be worrying about is somebody barreling down at 70 miles an hour who might not see them or have the time to react.”

Last year, the Tennessee Highway Patrol launched a Twitter public awareness campaign that went viral called #MoveOver after a Nashville police officer was struck and killed by a motorhome while trying to direct traffic around an overturned pickup truck. Just a week earlier, a trooper and a tow truck driver had been hit and killed at a crash site on a Florida interstate.

Colonel Tracy Trott, Tennessee’s highway patrol’s commander, said troopers are particularly at risk because they work on highways, where drivers are going fast.

“We get more worried about being run over than getting shot, to tell you the truth,” he said, noting that five Tennessee troopers have died in move over incidents since 1992.

Tennessee Highway Patrol records show that officers issued 1,380 move over citations in 2013 and 1,880 last year. The maximum penalty in Tennessee is a $500 fine and up to 30 days in jail.

Trott cautioned that while it’s important to spread the word about move over laws, drivers who try to obey can sometimes make the situation even more dangerous.

“Some people take the law literally, meaning they have to move over, rather than slow down and proceed with caution,” he said. “If people are breaking their neck to get into another lane when there’s too much traffic and the lane is full, they can cause a chain-reaction crash. That could cause cars to go out of control and head right toward the officer on the shoulder.”