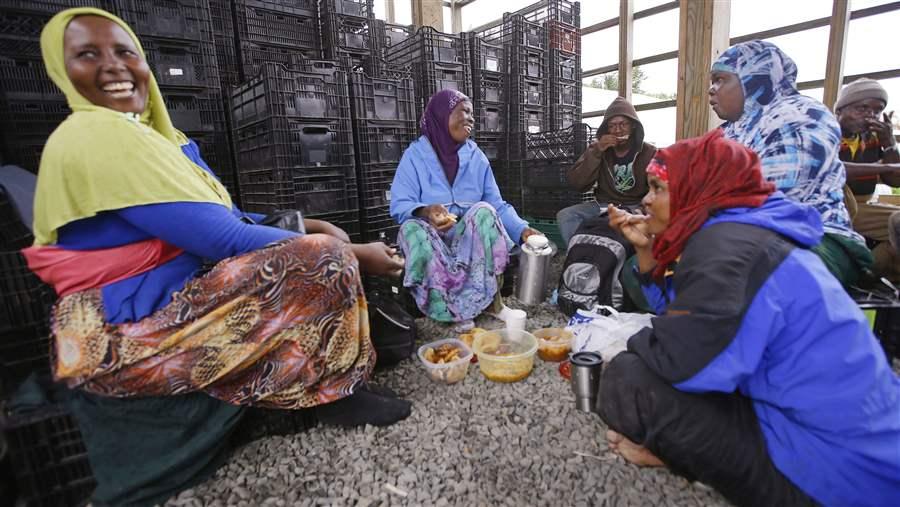 Somali refugees near Springfield, Massachusetts, share traditional food from their homeland. Springfield’s mayor wrote the State Department asking for a moratorium on refugee placement in the city, but Massachusetts and other states have tried to ease their integration into the U.S. (AP)

Second in an occasional series on black immigrants.

Ten years ago, when he graduated from a university back home in Eritrea, “G.” was conscripted into the army. There, he learned that the military, the strong arm of his country’s authoritarian regime, could keep him for as long as they liked, treat him however they liked. G was forbidden to complain.

Conditions in the military are just one reason his country has been called the “North Korea of Africa.”

“There’s no way out,” said G., now 33, who asked not to be identified for fear of jeopardizing his family’s safety in Eritrea. “And if you try to do something about it, there are consequences.” Namely, torture, enslavement or death.

G. decided to take his life in his hands — for soldiers, leaving the country is a capital offense — and escape Eritrea, first sneaking into neighboring Sudan with forged papers, then taking weeks to drive through the Sahara Desert into Libya. Libya was no refuge for refugees, so he and a couple dozen other migrants crammed into a tiny boat headed for Malta. G. was lucky. Unlike the more than 700 migrants who drowned crossing the Mediterranean earlier this year, he survived.

Last year, G. was granted refugee status in the U.S., enabling him to settle in Montgomery County, Maryland. He is part of a rapidly growing group of 1.4 million black immigrants from sub-Saharan Africa who’ve migrated to the U.S. since 1980. Nearly a third of them are refugees fleeing war or persecution, according to the Pew Research Center. (Pew also funds Stateline.)

Overall, Africans are among the most educated immigrant groups, but some refugees arrive with little education or job skills. All refugees arriving through the U.S. Refugee Admissions Program receive temporary federal aid, including income and medical assistance, education and employment training.

But the eligibility period for that aid has waxed and waned over the years, shrinking from a high of 36 months to the current 8 months, shifting many of the costs to the states, according to the National Conference of State Legislatures. And while every state but Wyoming (which has few refugees) has some sort of office for refugee resettlement, the aid states offer can vary dramatically, according to Ann Morse, program director for the NCSL’s Immigrant Policy Project.

“There’s not a consistent approach,” Morse said. “There was a very nice partnership program between the feds and the states, but the feds started cutting back. It was very effective, but like the rest of the immigration system, it’s woefully outdated. States end up picking up anything an immigrant group might need,” from finding interpreters for schoolchildren to job training and health care.

Some states, such as Minnesota, Massachusetts and Maryland, have welcomed refugees, offering extensive programs and assistance to help ease their integration into the U.S. But a handful of communities have tried to halt resettlement.

In 2002, the mayor of Lewiston, Maine, wrote an open letter to Somalis asking them to refrain from locating there because the city’s resources were “maxed out.” Ten years later, the city’s current mayor came under fire for telling a reporter that Somali refugees should “leave their culture at the door.”

Four years ago, the mayor of Manchester, New Hampshire, where more than 2,100 refugees from countries such as Somalia and Nepal settled between 2001 and 2011, asked the State Department to stop sending displaced immigrants to his city.

And even though the state of Massachusetts has been welcoming, some Massachusetts cities have not been. Of the 1,500 refugees that settled in Springfield between 2011 and 2013, several hundred are Somalis, many of whom live in substandard housing. In 2013, Mayor Domenic Sarno wrote a letter to the State Department imploring federal officials to stop sending refugees to his impoverished city. Last year, Sarno stepped up his efforts. (Sarno’s office did not respond to Stateline requests for comment.)

African immigrants are a rapidly growing population. Between 2000 and 2013, their numbers jumped 137 percent, according to an April Pew Research Center analysis of census data.

Most enter the country through a “diversity visa” or through family reunification programs. But about 28 percent are refugees or political asylees, the beneficiaries of the Refugee Act of 1980, which allows expatriates fleeing conflict zones to enter the U.S. Most African refugees hail from Somalia, Eritrea, the Central African Republic, Sudan and the Democratic Republic of Congo, according to Jeanne Batalova, senior policy analyst with the Migration Policy Institute.

Many African refugees like G. risk their lives by crowding onto rickety boats to seek a better life in Europe. Critics say Europe isn’t handling its share of the burden, and today the U.S. resettles more refugees than any other country, according to the United Nations High Commissioner for Refugees (UNHCR).

But many more African refugees need help, said Tsehaye Teferra, president of the Ethiopian Community Development Council, a national voluntary agency, or “volag” authorized by the State Department to resettle refugees. “The admissions number is not proportional to the need. We’re talking about millions of refugees that need protection.”

Getting that protection can be arduous. Typically, Negash said, African refugees languish in refugee camps—the largest is in Kenya—for seven to 10 years before they are allowed to enter the U.S. The camps are often crowded and dangerous. Often there is no school or work.

At the camps, officials from the UNHCR interview displaced people, determine if they are truly refugees who cannot return home, and assign them to a new country. African refugees cleared to come to the U.S. are extensively vetted, more than any other refugee group, even undergoing DNA testing, according to Negash. Then nine volags sift through piles of biographies to decide who goes to which state. Priority is given to reuniting families or settling single refugees in an established immigrant community, Teferra said. The volags also consider which states have better housing or employment options, he said.

(Political asylees have a different immigration status than refugees. They enter the country on their own and apply for asylum after arrival.)

States don’t have much control over which refugee populations end up in their states, but they can tell the State Department how many refugees they can reasonably handle, said Ann Flagg, director of the Maryland Office for Refugees and Asylees. Maryland takes in about 1,800 refugees and 400 to 500 asylees a year, she said.

Volags work with a network of community-based nonprofits in each state to coordinate the refugees’ arrival, including finding them places to live. The affiliate agency receives a one-time grant of about $1,925 to resettle the new immigrant for the first 30 days, according to Teferra. (The bulk of that goes to the refugee for rent, clothing, furnishings and food, while $725 is for administrative costs.) Agencies enroll relocated refugees in local social services, which have federal funding from the Office of Refugee Settlement (ORR).

Depending on their skills or English proficiency, some refugees are eligible for a four-month, matching grant program funded by the ORR in a federal/private partnership. The program, which helps with job training and placement, is effective, but slots are limited, according to Teferra. Other refugees are referred to state-funded services.

Refugees are enrolled in Temporary Assistance to Needy Families if they qualify. If they don’t, they only have the eight months of federal aid. But all are required to look for work immediately, Flagg said. The focus is on getting a job, any job, quickly. Sometimes, too quickly, refugee advocates say.

“Refugees are frustrated,” Teferra said. “By the time they come here, they have really wasted a lot of their time in the camps. There is no education, no work. So coming here, they have to catch up with everything. You have young adults who have never been in school. Or single moms who are caring for children and cannot work. That presents a real challenge.”

One Size Doesn’t Fit All

Back home in the Democratic Republic of Congo, Beni Dedieu Luzau worked as a journalist, college professor and activist. His activism got him in trouble with the government; he said, he was imprisoned, beaten and tortured. He lost six teeth; the skin around his left eye is blackened, evidence of what he said was a particularly brutal beating. So he migrated to Uganda, where his work with the LGBT community and victims of sexual violence meant the Ugandan government cancelled his refugee status.

In 2008, Luzau and his family were granted refugee status in the U.S. and were resettled in Las Vegas. But once here, he said, he was confronted with mountains of puzzling paperwork. Just to get a bus pass took multiple appointments with his case manager, he said. After four months in the program, he said, he quit and found work on his own as a French tutor. He said he is grateful for the chance to start over here, but figures there’s got to be a better way.

“You have refugees who are educated and you have refugees who didn’t go to school. Here, all refugees are placed in the same box,” said Luzau, who changed his name when he became a U.S. citizen and now lives in Maryland, where he advocates for other refugees. “The attitude in the U.S. is, ‘We give you food stamps, we pay your rent for six months, we find you a job, then you’re good, you’re self-sufficient.’”

But that’s not the case, he said. Torture survivors still struggle with the psychological trauma and need services different from women hailing from countries where rape was used as a tool of war.

While all states dole out the same amount of federal aid to refugees, some are better equipped to handle refugee populations, immigration specialists say. In some states, it’s easier to get subsidized housing, in others, there are few social services, but it’s easier to eke out a living.

All states should ensure immigrants have linguistic and culturally appropriate programs, according to Teferra. In Minnesota, where 523 African immigrants have arrived since October, the state contracts with local agencies to help refugees with everything from job-seeking to parenting skills and transportation.

For his part, G. said he couldn’t wait to graduate from assistance programs, so he could commit himself to finding meaningful work. Today, he lives in Northern Virginia and works at the Ethiopian Community Development Council, helping other refugees settle into their new lives.

“I’m very thankful,” G. said. “I know what lack of freedom means. Now I am free and given an opportunity to succeed. I can see the future.”