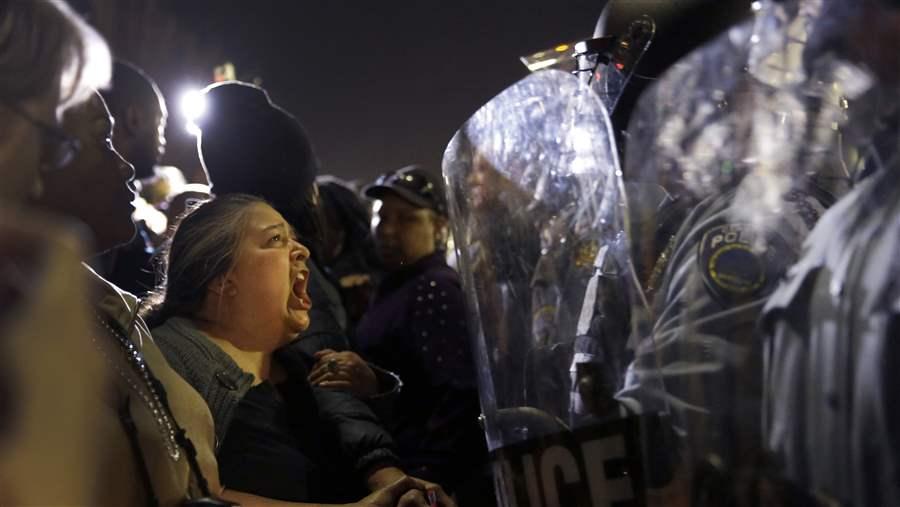 On the night he died, Douglas Ostling dialed 911 — but he wasn’t in distress, according to his parents. Bill and Joyce Ostling said they cautioned the police officers who showed up at their Bainbridge Island, Washington, home that their 43-year-old son, who lived in an apartment above the garage, was mentally ill. But when Douglas came to the apartment door carrying the ax he used to cut kindling for his wood-burning stove, the situation escalated.

The Ostlings and the police provide different accounts of what happened next. What is certain is that one of the officers shot Douglas. Over the next hour and 17 minutes, he bled to death on the floor of the apartment while the police surrounding the garage treated him as a barricaded suspect.

After their son’s death in October 2010, the Ostlings advocated for better crisis training for Washington state police officers. Last month, Democratic Gov. Jay Inslee signed the Douglas M. Ostling Act, which mandates that all officers in the state receive an initial eight hours of crisis intervention training and participate in a two-hour review course each year. The bill also includes a mechanism to pay for 25 percent of the patrol officers statewide to participate in a 40-hour training program.

“There are a lot of things broken, and we helped fix one,” Bill Ostling said. “It’s not a total fix, but at least it starts getting some attention, which is needed.”

Spurred by police shootings in Missouri, South Carolina, Ohio and Maryland, lawmakers in many states have debated policing reform measures this legislative session. Among them: measures requiring local police to provide more extensive training, equip officers with body cameras and collect better data on the use of force. But many of the proposals have stalled because of a lack of money and resistance from local police agencies.

About half of the police agencies in the U.S. employed fewer than 10 officers in 2013, according to the Bureau of Justice Statistics. For such small departments, the cost of training— including paying officers to fill in for those receiving additional training in the classroom — is a major barrier.

Similar concerns played out in Colorado, where Republican state Sen. John Cooke, a former county sheriff, joined with Democrats to pass initiatives including a grant program to help local agencies pay for body cameras, a move to bring outside oversight to investigations of police departments and a requirement that officers receive additional situational de-escalation, community policing and anti-bias training.

Cooke called other bills, such as a failed attempt to ban the use of chokehold techniques, “pretty extreme.”

“I’m not saying that for every minor arrest a chokehold is used,” Cooke explained. “But when you’re in a knockdown, drag-out fight, you’ve got to do what you’ve got to do.”

“You have different community needs and different agency size,” Cooke said. “You can’t write a law that covers everything. Mandatory training — a lot of these small agencies don’t have the funds or the money to do the training they want to get done.”

Jennifer Shaw, deputy director of the ACLU in Washington state, where the Ostling bill will take effect in late July, said training is typically left to local jurisdictions, but policies governing police action should be standard across the state.

Money could be one reason agencies resist training mandates, she said, but it is more likely that localities want control over their police departments.

“They don’t seem to have a problem taking money when it’s offered,” Shaw said. “But when it comes to laying down certain requirements of how policy is written, how training is undertaken, that’s where the local jurisdictions get upset.”

She said it’s important to have statewide policies, since officers from different agencies often work together.

Before 2015, only four states had body camera laws on the books. By May, 34 states were at least considering legislation related to the devices.

Promoted as a way to hold police accountable, the cameras have raised questions about procedure, public records access and the expense of storing, reviewing and releasing footage.

In a 2014 survey by the Police Executive Research Forum, nearly 40 percent of police agencies without body cameras reported cost was the primary barrier to using the devices.

Tracking Use of Force

While cameras and training are getting a lot of attention from lawmakers, some policing experts say the country’s next wave of reforms lies in accurately tracking how and when officers use lethal force.

There is no federal standard for collecting and comparing data about police use of force, though the FBI does maintain a database of officers who are assaulted or killed.

“If we had a national database with data by city, we could then say these police departments are doing much better than these others,” said Samuel Walker, a policing expert and professor emeritus at the University of Nebraska at Omaha. “We could then do research about communities — policies, management, personnel practices that contribute to lower rates of shooting.”

In Maryland, lawmakers were already considering a number of reforms before public outcry over the death of Freddie Gray, a Baltimore man who died in police custody, reached a fever pitch.

Del. Alonzo Washington, a Democrat from Prince George’s County outside Washington, D.C., spearheaded a new law that requires law enforcement agencies to report all officer-involved deaths to the Maryland Governor’s Office of Crime Control and Prevention.

“We need more transparency and accountability,” Washington said. “People died at the hands of police officers, why shouldn’t we know that?”

Maryland Republican Gov. Larry Hogan recently signed that measure, along with a bill creating a commission to establish guidelines for police-worn cameras and a measure to establish behavioral health units at police agencies in the Baltimore area.

In Colorado, a similar law will require every officer involved shooting be reported to the state Division of Criminal Justice. Cooke also sponsored that legislation.

The U.S. Justice Department has opened nearly two dozen investigations of police departments during the past six years after allegations of brutality or in the wake of police shootings. It has recommended reforms in cities such as Seattle, Newark, New Jersey, and Ferguson, Missouri, or entered into settlements to change policing policies, as it did last week in Cleveland.

Although the police shooting of Michael Brown in Ferguson last August launched a national dialogue on police tactics and sparked plenty of discussion in state capitols, that hasn’t translated into many new state laws—at least not yet.

In Missouri, for instance, lawmakers proposed more than 50 reforms during the legislative session. But only one — a measure to limit the revenue local jurisdictions can raise through traffic tickets — became law.

Additionally, Missouri and 19 other states proposed nearly 50 bills regarding racial bias training for officers, according to NCSL. None passed except the one in Colorado, the group said.

Sarah Rossi, director of advocacy and policy for the Missouri ACLU, said legislative leaders in Missouri lacked the appetite to pursue real change. “I think the most important point was there were so many bills that could have addressed police reform and so many of them were ignored or given a cursory glance and then ignored,” Rossi said.

When the Missouri Legislature began its session in January, then-House Speaker John Diehl, a Republican, told reporters the House would not “have a Ferguson agenda,” and lawmakers would not be “eager just to throw money at a problem.”

In Ohio, McDonald of the Fraternal Order of Police said the issue comes down to money. “There are over 900 police agencies in the state of Ohio, so what might be needed in Cleveland or Cincinnati might not be needed [in a rural area.]”

But Mike Brickner, senior policy director for the ACLU of Ohio, said financing is only a part of the resistance to change.

“It’s kind of like swimming in a sea of Jell-O,” he said. “It’s very hard to make progress, it’s very slow going, it’s very arduous. None of these will be overnight solutions.”