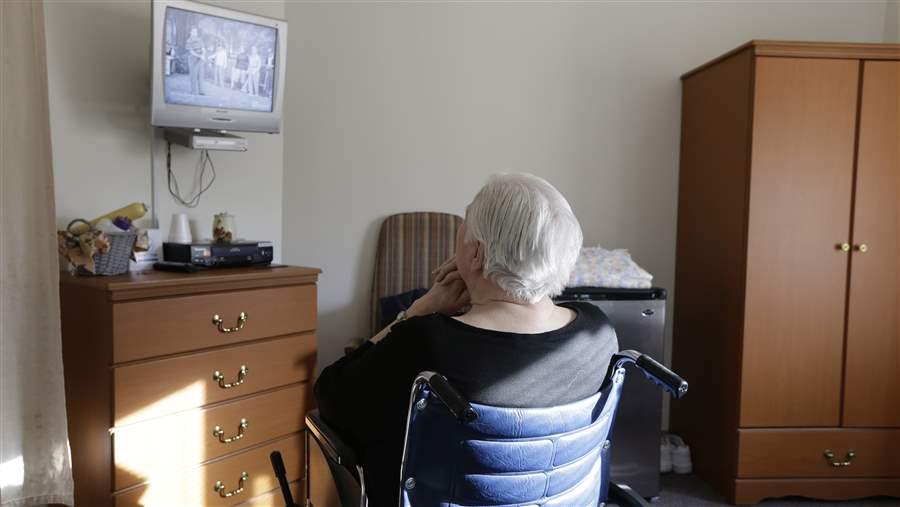 An elderly woman who was abused by a relative watches television inside her room at a retirement community in Mason, Ohio. Inconsistent reporting and scarce resources have hampered efforts to combat the growing problem of elder abuse. (AP)

We know that victims of elder abuse tend to be socially isolated, physically weakened and struggling to maintain their independence. They are reliant on family, friends or caregivers who violate their trust.

What we don’t know, because elder abuse is underreported, is how big the problem really is.

There are no official national statistics on how many older people are mistreated physically, emotionally or financially. Definitions and methods of addressing the issue differ state to state, and even county to county. Nor is there a dedicated stream of federal dollars for Adult Protective Services (APS) agencies, which most states rely on to combat elder abuse. Each state has cobbled together its own funding and bureaucracy.

Nevertheless, advocates and officials say there is little doubt the problem is growing, driven in large part by the tremendous growth in the elderly population. To address it, some states are training police and financial professionals to recognize and report elder abuse, and creating special teams of police, social workers and geriatric experts to investigate it. Cities, states and nonprofits are creating shelter housing for abuse victims, and some states are trying to quantify the cost to taxpayers when elders are fleeced out of their money and forced to turn to Medicaid.

“People need to understand what a huge, expensive and lethal problem elder abuse is,” said Kathleen Quinn, executive director of the National Adult Protective Services Association (NAPSA). Some researchers estimate that as many as one in 10 people over 60 is abused. That figure does not include financial exploitation, which costs victims at least $2.9 billion a year, according to MetLife.

“If we had a disease that affected 10 percent of the population, I think we’d look closely at it,” Quinn said.

Elder abuse is a long way from achieving the political or budgetary recognition of child abuse or domestic violence, even as the baby-boom generation creates the largest senior population ever, with 10,000 Americans turning 65 every day.

NAPSA recommends that caseworkers at Adult Protective Services agencies handle no more than 25 cases per month. But only 13 states met that standard in a 2012 survey. And in most places, there isn’t enough to money to properly train the caseworkers who are available.

Texas exceeded the caseload standard in the 2012 survey. Since then, however, the state has reduced average caseloads to about 25, thanks to steady funding and a decision to shift more serious mental illness cases away from APS and to the state’s mental health workers. The criteria APS agencies use to determine which cases to accept, such as whether the abused person must be 60 or 65, differ by state, influencing the caseload burden. The changes in Texas mean that APS caseworkers there now have time to assist with the care of clients’ pets.

The Texas APS division last year investigated 81,681 cases of older and disabled adults living at home, and has expanded its responsibilities to investigate abuse in state-operated and state-contracted settings.

“One of the reasons we have a strong program is due to legislative support over time,” said Beth Engelking, who heads Texas APS. One program that has spread through clinics in the state incorporates training and six basic screening questions to help health practitioners determine if a senior is being abused.

In Oregon, Attorney Gen. Ellen Rosenblum, a Democrat, is asking legislators to fund a state prosecutor dedicated to elder abuse – akin to existing posts for domestic violence and drunk driving. The position, including training and assisting local district attorneys, is essential to combat the “growing epidemic,” Rosenblum said.

And Michigan approved 10 laws in 2012 to strengthen elder protections and abuse investigations, penalties and reporting requirements.

A total of 29 states plus the District of Columbia considered legislation in 2013 to crack down on financial crimes against the elderly, according to the National Conference of State Legislatures (NCSL). Eighteen laws and resolutions were adopted. (NCSL has not compiled numbers for 2014 or 2015.)

“All of the states recognize the scope and the nature of the problem. It comes up every time we talk to them,” said Damon Terzaghi, senior policy director at the National Association of States United for Aging and Disabilities. “We definitely see a lot of challenges both from the fact that we have a huge population turning 65, and the fact that people are living longer today than ever before, which creates new service needs that didn’t exist before.”

Because states have different reporting methods and victims tend to be reluctant to notify authorities, it is difficult to pin down the extent of the problem. Research indicates the overwhelming majority of cases go unreported.

Michigan officials suspect that as many as 90,000 older adults are abused in their state each year, based on national projections—a number that far outstrips reported incidents. Criticized in recent years by the state auditor for shortcomings in training and investigative practices, Michigan’s APS investigated 13,511 cases last year, compared to 7,523 in 2010. The increase partly resulted from a new centralized state hotline, a “No Excuse for Elder Abuse” awareness campaign and new laws to protect vulnerable adults, officials said.

“Raising the awareness is something that is starting to change here in Michigan,” said Kari Sederburg, director of Michigan’s Office of Services to the Aging. “People are finally starting to wake up and realize we need to pay attention to this, that it’s a growing crime, and not just the physical abuse but also financial exploitation.”

But the wide variation in municipal and agency reporting systems has hindered the state’s ability to grasp the extent of the problem, she said. Michigan lawmakers recently approved $1 million to explore the feasibility of a statewide reporting system, and to support training, awareness and education efforts. Thirty-three out of 83 Michigan counties have adopted voluntary state standards for joint investigations by agencies.

Elder abuse is “an insidious and tragic social problem,” a New York study of cases across the state concluded in 2011. The report, spearheaded by the nonprofit group Lifespan and based on more than 4,156 interviews with seniors, estimated that some 260,000 New Yorkers suffered elder abuse in a year, not including nursing home residents and people with dementia.

But officials from New York’s Office of Children and Family Services said they could not quantify the problem, or even their own cases beyond a 1997 reference on the state website indicating fewer than 17,000 elder abuse reports annually. The state is working on an update, a spokeswoman said.

In one promising public-private arrangement in Sacramento, California, private hospitals paid $25,000 each for county-assigned social workers to assist seniors at risk of abuse or neglect who were frequent visitors to emergency departments. The social workers remained involved with the seniors after they were discharged from the hospital to ensure they got the care they needed. Despite promising early results, the program “fell through the cracks” last year because supporters couldn’t prove it was worth its rising costs, said Debra Morrow, county director of Senior and Adult Services.

Several states are participating in a project run by the Administration for Community Living (ACL), which is part of the U.S. Department of Health and Human Services, to develop the first national reporting and data system. The data will help clarify the scope of abuse and other basic information, laying groundwork for potential targeted policies and programs, ACL officials said.

Elder abuse at the federal level has gained a higher profile under Kathy Greenlee, the ACL administrator. It will be one of the major topics addressed at the White House Conference on Aging anticipated this summer. And advocates hailed President Barack Obama’s 2010 authorization of the first dedicated funding for APS, a comparatively restrained $100 million a year for four years. Congress approved the sum as part of the Elder Justice Act, which also incorporated other elder abuse planks and the ACL national reporting project, but has yet to set aside the money to implement it.