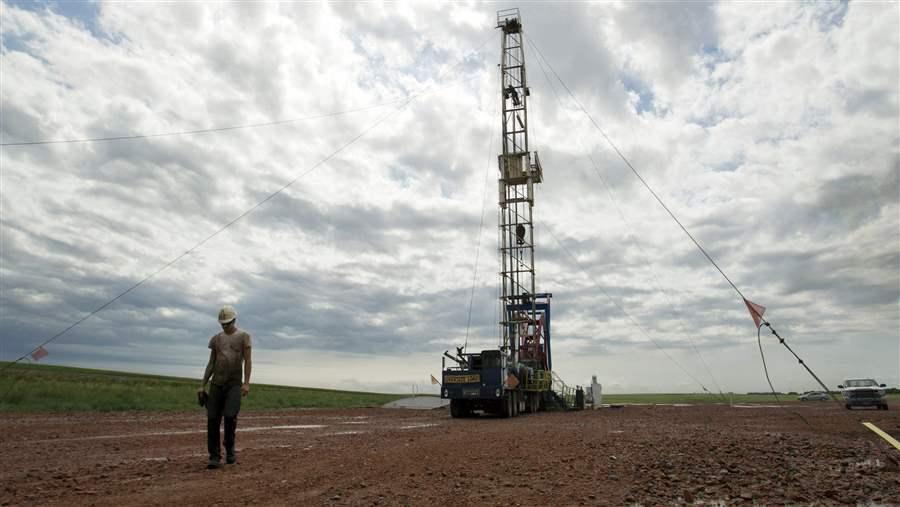 An oil worker walks away from a derrick near Williston, North Dakota. Lower oil prices are causing financial worries in some states that rely heavily on oil taxes. (AP)

Low oil prices are putting a dent in the treasuries of many of the nation’s biggest oil-producing states, forcing them to cut spending, raid rainy day funds or even reassess how they finance state government.

Monthly revenue from oil taxes has fallen by anywhere from 45 percent to 75 percent in the nation’s top 10 oil-producing states since collection highs in July of last year, as the price per barrel of crude dropped from $103 in July to $54 in April.

Most of the top 10 oil-producing states tax the industry by the barrel taken out of the ground, with the rates varying from state to state. As oil prices have dropped, the industry has pumped fewer barrels in some states because it’s become less cost effective. Dependence on oil has also led to falling sales and income tax revenue in some states as the industry has laid off workers, cutting 3,000 jobs last month alone.

Some states tax oil differently. Pennsylvania, for instance, charges oil companies an impact fee, paying a fee for every drill. California gets part of its oil tax revenue from a flat charge of 36 cents on each gallon pumped from the ground.

None of the states is feeling the pain quite like Alaska, which depends on oil tax revenue to fund three-quarters of state government, the most of any state. The state’s monthly oil revenues have dropped by about 75 percent since the beginning of the fiscal year, leaving a $3.6 billion deficit and a special session stalemate between legislators and independent Gov. Bill Walker that could lead to a government shutdown if a budget isn’t passed soon.

This year’s budget crisis may not be Alaska’s last. The state has just enough money, $9 billion, in its rainy day fund to keep government afloat for three more years, said Jerry Burnett, deputy commissioner for the state’s Department of Revenue.

That prompted Walker to call a three-day summit of leaders from a variety of industries next month to discuss what size of state government the people of Alaska should expect and how it should be paid for.

“I suspect that if oil prices stay down that’s not going to be a revenue source big enough to fund government in Alaska, so yes, I think the discussion is going to be along the lines of how big government needs to be and how we’re going to fund it,” Burnett said of the summit.

Part of Alaska’s problem is the decline in oil production. The state has been dependent on two major oil fields for decades, while new, smaller fields have been difficult to develop.

The situation is forcing lawmakers to consider other taxes or spending cuts to cover this year’s deficit and to finance state government down the line.

“It’s now no longer the case where we have the price and production volume where we can depend on one source of income for the budget. It’s time to diversify for sure,” said Republican state Rep. Paul Seaton. He has proposed extending the state’s income tax to businesses registered as limited liability corporations, or LLCs, which currently don’t pay it.

House Minority Leader Chris Tuck, a Democrat, said the state should focus more on changing its oil tax policy by sticking to its  budget and limiting how much the state pays out in tax credits to the industry each year. Currently, oil companies are eligible for a number of state tax credits based on exploration, development or production of oil. Once the state reviews the expenses, oil companies are presented with a certificate which they can redeem any time for cash. Tuck thinks the state should not pay more than $500 million a year in redemptions. Any certificates presented after that cap would be the first to get paid the following year.

Cuts to education and seniors’ programs also have been proposed this year to balance the budget. One program not being cut: the dividends program, which pays Alaska residents a portion of oil tax revenue, which was almost $1,900 per person in 2014. 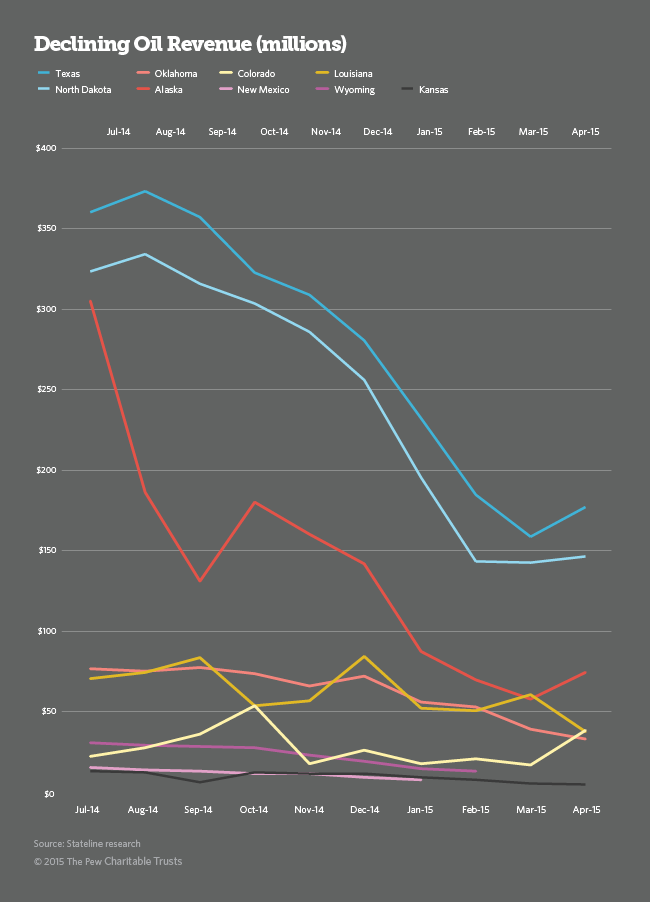 When revenue from oil and gas royalties fell from $626 million in August to $550 million in February, New Mexico turned to a reserve fund for $153 million to finance its $6 billion budget for next fiscal year.

“Falling oil revenues are a pretty big deal for us,” said Peter van Moorsel, New Mexico’s chief economist for the Legislative Finance Committee.  Even with falling prices, oil revenue still accounts for 16 percent of the state’s revenue, down from nearly 20 percent last year.

In Wyoming, the nation’s eighth biggest oil-producing state, legislators came into the session facing a $217 million shortfall, largely a result of less oil and gas tax revenue. For every $5 drop in the price of a barrel of oil, the state loses $18 million in revenue, and this year the state brought in about $125 million less than expected. For natural gas, it’s even worse, with the state losing $86 million for every $1 reduction in the price per thousand cubic feet.

To cover the loss, legislators used $184 million that otherwise would have gone into its rainy day fund to finance the state’s $200 million supplemental budget for the coming year.

But Kristy Nichols, the state’s commissioner of administration, said falling oil prices are not the main culprit, although the state is getting about $200 million less in oil tax revenue than predicted.

Oil and natural gas taxes provide only about 13 percent of state revenue, down from a high of 45 percent in the 1980s.

“The oil and gas industry and revenues are certainly important, but the reality for Louisiana is after the 1980s the state learned some hard lessons about diversifying the economy,” Nichols said. 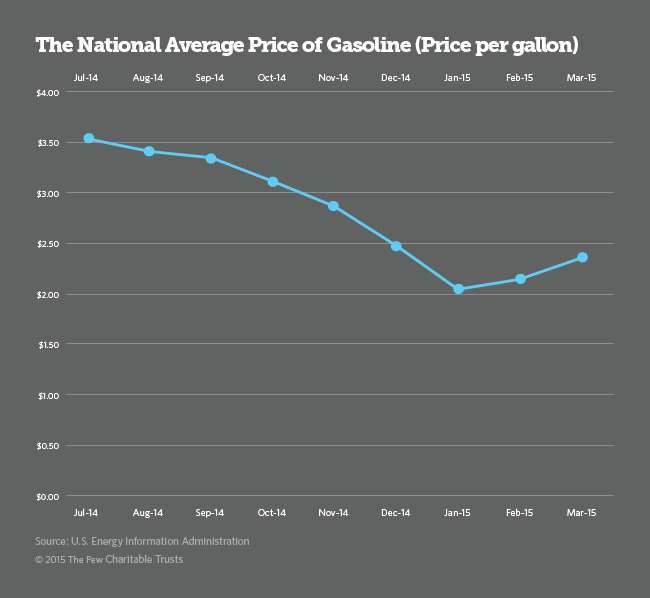 North Dakota also has seen a dramatic fall in oil tax revenue, but the state reacted by lowering its oil tax with the goal of making future revenues less volatile.

The state initially expected $8.3 billion in oil tax revenue when finalizing its revenue forecast at the end of last year.

“Literally that day, oil prices started falling significantly,” Pam Sharp, director of the state’s Office of Management and Budget, said of the December day the report was presented. “By January it was obvious to everyone that that was obsolete.”

As the price of oil continued to fall, so did estimates of how much tax revenue it would generate. By the time March’s forecast was out, oil-tax revenue was pegged at $3.4 billion.

To reduce the damaging effect of consistently low prices in the future, the legislature changed the state’s oil tax structure. It lowered the extraction tax from 6.5 percent to 5 percent, but scrapped a “trigger” that reduces the tax rate significantly once oil falls below $55.09 a barrel for five consecutive months.

This year the price of oil has been below the trigger price for four consecutive months. If the average May price is below that amount, the state would get about $75 million less in oil taxes a month until the average price rises above $55 per barrel again.

Senate Appropriations Chairman Ray Holmberg, a Republican, said removing the trigger removes some uncertainty in tax revenue by guaranteeing the state won’t lose millions of dollars if oil prices remain low. “It was prudent because we reduced immensely the risk to state income,” he said.

While the state may no longer have to worry about the trigger, some foes of lowering the tax rate say the state is sacrificing too much potential income.

“Dropping the extraction tax from 6.5 percent to 5 percent is not a 1.5 percent reduction, it’s a 23 percent reduction,” said Senate Minority Leader Mac Schneider, a Democrat who opposed lowering the rate. “That’s going to be billions of losses in revenue in the long run.”