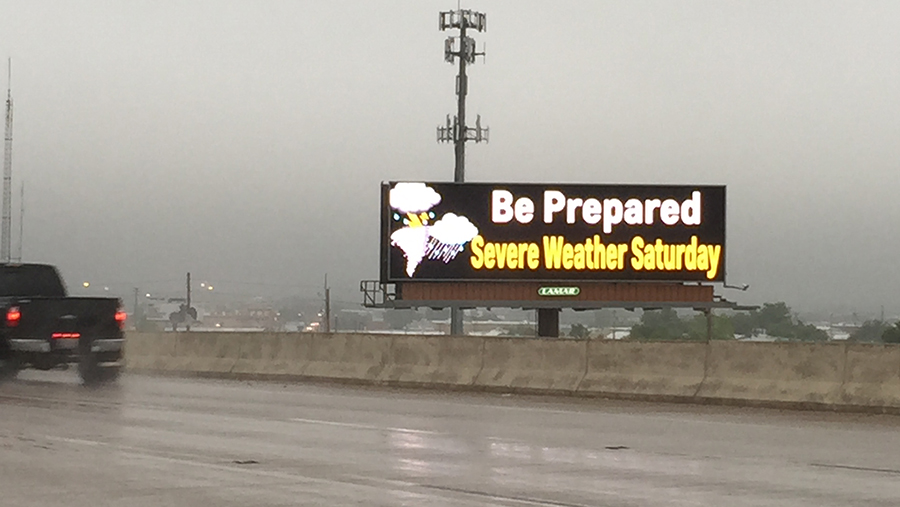 When a tornado was barreling toward Oklahoma City earlier this month, some motorists in the area may not have known of the possible danger. But if they were driving on the highways, they could have been alerted by any one of two dozen large, multicolored digital billboards flashing warnings.

Just as they’ve done with Amber Alerts to notify the public about abducted children, states and local governments are increasingly turning to private billboard companies to warn citizens about natural disasters and emergencies.

The electronic signs have aired targeted messages about everything from hurricanes and flash floods to natural gas shortages. They’ve also broadcast updates about evacuations and road detours.

“One of the big things we do in emergency management is try to get life-saving information to people as quickly as possible, so they can take the appropriate action. We use every channel we’ve got, and this is a good one,” said Bryan W. Koon, director of the Florida Division of Emergency Management. Koon also serves as president of the National Emergency Management Association, which represents emergency managers from every state.

State and local officials have used digital billboards to broadcast messages in a number of emergencies in recent years. Among them:

“These billboards can be very helpful during emergencies,” Koon said.

Digital billboards are hard to miss. They’re bright — especially at night — and big. They often stand along highways, where a standard billboard measures 14 feet by 48 feet. Thousands of tiny LED lights create static images, which typically rotate every six or eight seconds.

Nationwide, about 5,500 out of 400,000 billboards are digital, according to Ken Klein, spokesman for the Outdoor Advertising Association of America, the billboard industry’s trade association. Forty-six states now have electronic billboards on their roads, he said.

The signs also are controversial.

Some conservation groups, cities and counties have battled against digital billboards, complaining that they are eyesores that distract drivers, devalue property and diminish the quality of life. A number of communities including Franklin Township, New Jersey, St. Louis, Denver and Knoxville, have banned them.

“The billboard industry is in a rush to put them up because they are big profit makers,” said Max Ashburn, communications director for the conservation group Scenic America. “Part of their PR effort is to go to state and local governments and offer this (emergency messaging) as an incentive to get into these communities.”

The billboard industry denies that the signs distract motorists and notes that they generate income for landowners and revenue from property taxes and permit fees. And it argues that it offers free space to state and local governments as a public service.

At least six states — Alabama, Florida, Georgia, Massachusetts, Oklahoma and Texas — have entered into partnerships with private billboard companies to display the emergency messages, Klein said. So have some counties and cities, such as Milwaukee, which posted information about FEMA assistance on major thoroughfares after severe storms caused widespread flooding in 2010.

“There’s an immediacy and flexibility to it that makes it different,” Klein said. “Digital billboards have emerged as an increasingly common tool for emergency communication.”

Last year, Oklahoma emergency management officials and the National Weather Service partnered with Lamar Advertising Company, a national billboard company. So far, Lamar has broadcast warnings on 24 electronic billboards on highways in the Oklahoma City area — first when tornadoes struck in March, again when they hit earlier this month and last weekend, when severe storms were expected, according to Keli Cain, spokeswoman for the Oklahoma Department of Emergency Management.

The Oklahoma messages vary. Some alert drivers of a coming storm. Others list times when it’s expected to hit. And some are even more urgent: “WEATHER ALERT. Confirmed Tornado NEARBY! Tune to local station NOW!”

“As soon as we get word from the National Weather Service, they (Lamar staffers) hit the button and it goes live,” Cain said. “The more warning messaging we can give, the better.”

Rachel Tempanaro, vice president of digital media for Lamar, which has at least 2,000 digital billboards in more than 40 states, said once the message has been chosen and the artwork downloaded, the company can get it up on the boards very quickly.

“We have this huge network,” Tempanaro said. “It doesn’t make sense for us not to help in an emergency.”

Eric Waage, director of emergency management for Hennepin County, Minnesota, said his county has an agreement with the national billboard company Clear Channel Outdoor to put messages on digital signs during weather emergencies.

“We really wanted to alert motorists, because they’re extremely vulnerable,” Waage said. “In the old days, you’d have the radio station warning people. Nowadays, they might not be listening to the radio. They might be plugged in, streaming music or listening to a satellite station.”

So far Hennepin — which includes Minneapolis — hasn’t had to put the system to use, Waage said.

“Our last big tornado was in 2011,” he said. “But this is one of the many tools we can use to help us be better prepared when another one comes.”

Florida was the first state to turn to digital billboard companies to issue emergency alerts.

In 2008, after a series of hurricanes, state emergency management officials teamed with the Florida Outdoor Advertising Association, the state’s billboard trade group, which volunteered to post messages for free on more than 100 digital signs. The service was first used that year when Tropical Storm Fay caused widespread flooding. Over 10 days, 37 different emergency alerts were displayed on more than 75 billboards in nearly a dozen counties, according to the emergency management agency and the trade association.

Florida has used digital billboards four times since, when struck by tropical storms or flash floods.

Koon, Florida’s emergency management chief, said that when a storm or flood is approaching it’s particularly challenging for drivers on the highway, who may not have their radios on or may be visitors unfamiliar with the area.

“If people on the interstate are driving along at 70 miles an hour, they may not even know what county or city they are in. There’s an information vacuum,” Koon said. “Electronic billboards fill in this information gap.”