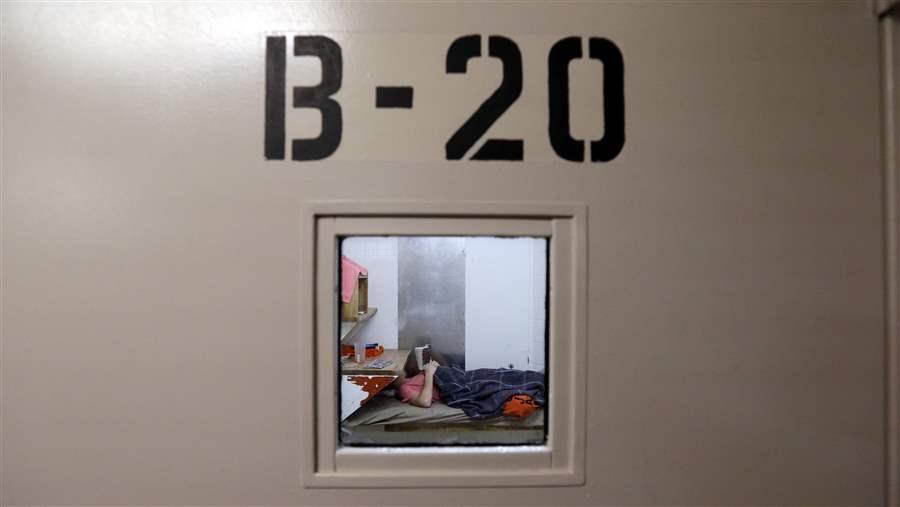 An inmate lies on a bunk reading in the psychiatric unit of the Pierce County Jail in Tacoma, Washington. An estimated 2 million adults with serious mental illnesses are jailed each year. (AP)

Paton Blough has served multiple jail terms as a result of mental illness.

He said his various offenses included brandishing a shotgun, reckless endangerment, destruction of civic property, spitting on a police officer, being a public nuisance and threatening a public official. Never was he charged with being mentally ill. That isn’t a crime, after all. But there was no doubt about why he had ended up in jail.

Blough, 38, has had bipolar disorder since his late teens. At times delusions convinced him of a worldwide conspiracy against him involving police officers, former President George W. Bush and Nazi ghosts.

In many places, police, judges and elected officials increasingly are pointing out that a high proportion of people in jail are mentally ill, and that in many cases they shouldn’t be there. In recent years, many cities and counties have tried to reduce those numbers by training police to deal with mental health crises, creating mobile mental health units to assist officers, and establishing mental health support centers as an alternative to jail, among other measures.

(Generally, local jails house inmates who are awaiting adjudication or who have short sentences, and they are run by local jurisdictions. State prisons, or penitentiaries, are where inmates serve sentences after conviction. They are the responsibility of the states.)

Earlier this month, a coalition including the Council of State Governments Justice Center, the American Psychiatric Foundation and the National Association of Counties kicked off a national campaign to encourage local jurisdictions to collect data on the jailed mentally ill and adopt strategies to avoid incarceration. In February, the MacArthur Foundation announced it would send a total of $75 million to jurisdictions interested in reducing unnecessary incarceration of people, including the mentally ill.

According to a 2009 study cited by the Council of State Governments Justice Center, an estimated 2 million adults with serious mental illnesses are jailed in the course of a year. Studies, including one from the Urban Institute, say they tend to stay in jail longer than those without mental illnesses, return to jail more often and cost local jurisdictions more money while incarcerated. More frequently than not, they are jailed for minor offenses, such as trespassing, disorderly conduct, disturbing the peace or illicit drug use.

“Today I’m holding 700 inmates and 20 percent are mentally ill,” said Frank Denning, sheriff of Johnson County, Kansas. “Some need to be there because of types of crime, but a higher number would benefit from some other type of intervention, like medication and treatment and so forth.”

Actually, the sheriff was understating the situation in his jail. According to his department’s statistics, in 2014, 22.5 percent of the people jailed in Johnson County were considered sick enough that they were administered psychotropic drugs.

Across the U.S., jails report that between 20 percent and 80 percent of their inmates are mentally ill. That broad range suggests measurement techniques are far from uniform. A Bureau of Justice Statistics survey found that in 2005, 64 percent of jailed inmates self-reported as having some kind of mental illness.

Many link the problem to the broader issue of a crumbling state and community mental health infrastructure. Without shoring it up, they say, it will be difficult to provide treatment that will keep the mentally ill from coming into conflict with police.

“If there are no other resources and (the mentally ill) have to be in a safe place; that’s still going to be jail,” Denning said.

According to one report, the number of state psychiatric beds in the nation fell from a high of about 550,000 in 1960 to barely 40,000 today. The steep decline began with the movement toward deinstitutionalization of the mentally ill in the 1960s, when scandals over conditions in state-run hospitals caused many to shut down. Now the preferred strategy is to treat mentally ill patients in their own communities.

“It was a good instinct,” said Fred Osher, the director of health systems and services policy for the Council of State Governments Justice Center. “Let’s move people out of these expensive, old, ‘One Flew Over the Cuckoo’s Nest’ facilities. But the problem is that the dollars didn’t flow to the people.”

State spending on mental health services shrunk through the decades. Between 2009 and 2012, states cut back mental health spending by a total of $4.35 billion, according to an often-cited study by the National Association of State Mental Health Program Directors. Although some of that funding has been restored in recent years, it has not been enough to meet the need – with the result that more mentally ill people are ending up in jail.

“It’s been frustrating and tragic that so little has been done to address the problem,” said Ira Burnim, legal director of the Judge David L. Bazelon Center for Mental Health Law. “There’s not a lot of magic in the solution.”

Many are hopeful that the Affordable Care Act’s Medicaid expansion, which extends health benefits to poor, single adults, will enable many to get mental health treatment and avoid the crises that previously landed them in jails. But 21 states have so far resisted expansion.

For now, many jails across the country hold more mentally ill people than hospitals do. That is one reason that jail administration has grown to be one of the highest costs for local governments. The mentally ill often require more medical services and surveillance than other inmates.

Even though jails administer psychiatric medicine to many who need it, no one thinks that jails are conducive for recovery from mental illness. Studies, including the Urban Institute report, have found that the mentally ill in jails suffer assaults at far greater rates than those without mental illness. “Jail is jail,” said Toni Carter, a commissioner in Ramsey County, Minnesota, and chairwoman of the Human Services and Education Policy Steering Committee for the National Association of Counties. “It is not a mental health treatment facility… Generally, they come out worse than when they entered.

“We have criminalized mental illness.”

Still, Carter said some cities and counties are employing strategies to keep the mentally ill out of jail that seem to be working. In Miami-Dade County, Florida, for example, police typically respond to 10,000 mental health-related calls a year. A few years ago, that would have led to more than 800 arrests. But after the county trained police in crisis intervention and began diverting the mentally ill to treatment rather than jail, the number of arrests plunged to nine.

Steve Leifman, a Florida judge who heads the Eleventh Judicial Circuit Criminal Mental Health Project, said the average daily jail population in the city of Miami and Miami-Dade County has dropped from 7,800 to 5,000 inmates. The effort has been so successful the county has closed one jail, saving it $12 million a year.

Leifman said the recidivism rate among mentally ill people charged with a misdemeanor has dropped from 75 percent to 20 percent. “Treatment works,” he said. “People with mental illness don’t want to be sick. That’s what most people don’t understand.”

Cook County, Illinois, has found success by using a combination of “supportive” housing (which includes rent subsidies, mental health treatment services), and Assertive Community Treatment (ACT) teams composed of mental health specialists who coordinate treatment and housing and employment support. The strategy has produced an 89 percent reduction in arrests of people with mental illness, and an 86 percent reduction in jail time and 76 percent drop in hospitalizations among participants.

In King County, Washington, a combination of ACT teams, supportive housing and intensive community-based treatments has resulted in a 45 percent reduction in jail and prison bookings among those participating. (See here for these and other examples of successful diversion programs in a report by The ACLU Foundation of Southern California and the Bazelon Center for Mental Health Law.)

According to the Council of State Governments Justice Center, more than 300 cities and counties across the U.S. have established mental health or drug courts, in which the mentally ill and those with substance use disorders are sent to treatment rather than incarcerated. Mental health courts have been established in such diverse locales as the Bronx in New York, Akron, Ohio, and Washoe County, Nevada.

In the majority of Paton Blough’s six arrests, such diversion programs simply were not available.

“They would have liked to have had a place to take me, but there were none,” he said. In jail, he often went without his medication and he found his paranoia deepening. As a result of his illness, Blough said, his first marriage collapsed and he lost his arborist business.

Thankfully, in one of his later arrests, he was sent to mental health court, which led to treatment that has largely kept him stable for six years. “I credit that program,” he said. “I could be dead or in prison if it weren’t for a program like that.”