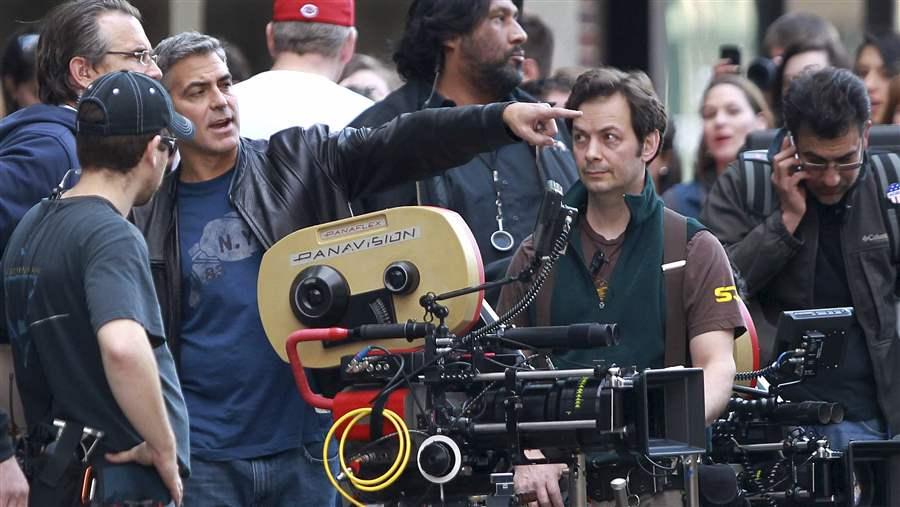 George Clooney plans a shot during the filming of a movie in Cincinnati. Ohio is one of 39 states that offer tax incentives to the film and television industries, but some states are beginning to reconsider whether they are worth the cost. (AP)

Louisiana residents may go gaga over Mark Wahlberg, Kurt Russell and Kate Hudson when they arrive in the state later this year to film a movie about the 2010 Deepwater Horizon oil rig explosion. But Louisiana and some other states are starting to question whether they are giving up too much to attract such star power.

The movie is being made in Louisiana largely because the state offers unlimited tax credits to entice film companies to shoot on location there.  Louisiana was the first state to adopt the credits in 1992. Now, 39 states and Puerto Rico have tax incentives of one kind or another, all aimed at the film and television industries, according to the National Conference of State Legislatures.

Proponents of the incentives point to the many jobs created during filming, from carpenters and electricians to caterers and drivers. But critics say those jobs don’t last. They point to numerous studies (except those commissioned by the film industry) which show that states never recoup the tax revenue they give away with the credits.

Louisiana currently has no limit on the value of the credits it will give out in a given year. But that may change.

Earlier this month, the Louisiana House voted 102-2 to limit film tax credits to $200 million annually. The bill was one of several that sought to put a cap on the credit. With the state facing a $1.6 billion budget shortfall, Louisiana legislators are considering a slew of bills that would reduce or eliminate many tax credits which are draining the treasury. Lawmakers rejected one bill that would have eliminated the incentives. Republican Gov. Bobby Jindal didn’t recommend scaling back the tax credit in his budget, but he may be amenable to doing so.

Other states also are looking at reducing or eliminating film tax credits.

The Alaska Legislature on April 19 approved a bill to kill the state's film tax credit program, which was scheduled to expire at the end of 2018, in 2016. Independent Gov. Bill Walker also called for a halt to new credits.

Those who supported scrapping the program cited the state’s steep decline in oil and gas revenues. According to a report by the Alaska Department of Commerce, filmmakers received over $38 million in tax credits between June 2009 and June 2013.

In Massachusetts, Republican Gov. Charlie Baker called for scrapping the state’s $80 million film tax credit program and using the funds to partially pay for increasing the earned income tax credit for the working poor. A Massachusetts Department of Revenue report showed that in 2012 only about $50 million of the $304 million in spending by the film industry went to Massachusetts vendors. The House has voted to keep the credit; the Senate has yet to act.

The Michigan Senate voted to spend $12 million on film tax credits after the House voted to scrap them starting Oct. 1. Republican Gov. Rick Snyder sought $50 million for the program in fiscal 2015-16, despite facing a budget deficit. The issue has yet to be resolved.

But other states are doubling down on their film tax incentives.

California, worried about the incentives other states are using to lure Hollywood productions, last year tripled to $330 million the amount available for film tax breaks.

In Pennsylvania, Democratic Lt. Gov. Mike Stack traded footlights for a footrace to raise awareness about what he says is too low a cap on the state’s film tax credit. The program is capped at $60 million a year, and Democratic Gov. Tom Wolf wants keep it at that amount. But Stack, a film actor who still appears in local productions, wants to expand that as much as possible. He ran in the Pittsburgh marathon to raise awareness of the credit issue.

In choosing locations, studios shop for the best tax deals and frequently play off one state against another.

For example, Netflix’s “House of Cards” last year threatened to pull production out of Maryland until the state extended its generous tax credit program, which gave out $62.5 million in credits between fiscal years 2012 and 2016, mostly to “House of Cards” and HBO’s "Veep."

This year, the Maryland General Assembly tried to rein in the credits, but lawmakers ended up approving a tax credit bill while leaving the specific dollar amount to Republican Gov. Larry Hogan.  Hogan hasn’t yet decided whether he will sign it.

“They’ll say to me, ‘Todd, I’ve got a movie, and I want you do to a budget for Louisiana, New Mexico, other states, and we’ll compare them,’” he said. “As long as it’s not location dependent, all of those things have to be taken into account.

“We can’t shoot the Statue of Liberty in L.A. But when you do ‘21 Jump Street’ or the ‘Fantastic Four’ (both of which were shot in Louisiana), you have options. Hollywood wants to go where the best deal is.”

According to the Louisiana Budget Project, a progressive think tank, Louisiana paid $231 million in credits in 2011-12, bringing the state’s total film spending to more than $1 billion in the past decade. The study called the return on that investment “a flop,” saying that taxpayers have paid $60,000 for every job created.

But the Motion Picture Association of America, in its study of the Louisiana program, said that in 2013, production spending associated with the credit supported 10,800 jobs across all industries, generating $471.2 million in personal income and $1.59 billion in economic output in Louisiana. That study called for the unlimited credit to continue.

Vans Stevenson, senior vice president for state government affairs at the Motion Picture Association of America, said states recognize that when they bring in film and television productions, they are “creating employment and investment in a state that wasn’t there before. You are generating additional tax revenue because people who weren’t making money before are spending money on goods and services.”

Robert Tannenwald, a retired Federal Reserve Bank of Boston economist and a lecturer at Brandeis University who authored one of the studies  on the impact of film tax incentives, said the “most careful studies show that you spend an awful lot for every job you create for residents of a state.”

“Film tax credits don’t pay for themselves, so states have to raise taxes or cut expenditures (to make up the difference), Tannenwald said. “Those snuff out jobs as fast as film tax credits create them.”

Tannenwald said the competition among states puts them into “perpetual competitive purgatory. If one state backs out, and the other states keep doing it, the state loses an awful lot of film production.”

He said the benefits of the production are quickly visible – working carpenters and electricians and politicians getting calls from the locals saying it’s fun to watch those films take place. The costs are less visible—and spread out over time.

“People get excited about seeing movie stars in local cafes and walking down the street. You can’t do an anecdotal interview with a commuter who is sitting on a train platform with frozen hands because of the lack of money to upgrade public transportation,” Tannenwald said.

Jack Gerbes, director of the Maryland film office, dismissed the negative studies, while not disputing those that have concluded the credits don’t pay for themselves. “This was never about revenue, it was about stimulating the economy, creating jobs and attracting crew members (to Maryland).” He said tourists still come to see the church in tiny Berlin, where the movie “Runaway Bride” was filmed.

Since 2012, Maryland has handed out $62.5 million in tax credits to production companies, according to the state Department of Legislative Services, which concluded that the credit was not worth the cost.

Maryland state Sen. Edward Kasemeyer, a Democrat and longtime backer of the tax credits, said the goal wasn’t to bring in more state revenue, but to create a film industry and“film culture” in Maryland. He said the production companies have spent upwards of $300 million in the state since the credit began.

But Matthew Mitchell of the conservative Mercatus Center at George Mason University said states shouldn’t try to create industries where they haven’t grown up naturally.

“There’s an allure to policymakers, who get irrationally star struck and like the idea of being at a production shoot with Ben Affleck or whoever,” Mitchell said. “With enough incentives, you can grow oranges in Maine. Would it be wise to do so? No.”