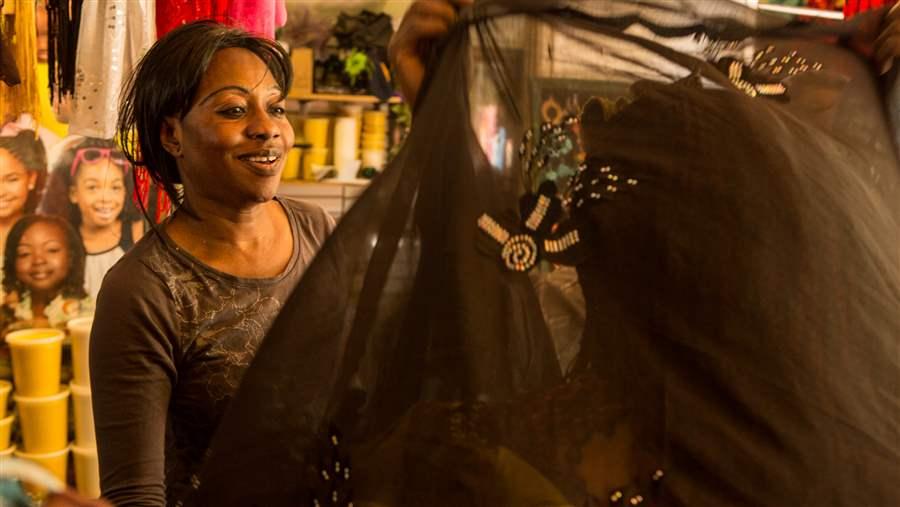 Haddi, a naturalized citizen from The Gambia, West Africa, helps a customer at her boutique in the Malcom Shabazz “African Market” in Harlem, New York. Haddi, who asked just to be identified by her first name, moved with her husband to New York 27 years ago. Though she says she has a college degree and worked in a bank back home, she ended up working on a factory assembly line in the U.S. (Ed Lefkowicz)

First in an occasional series on black immigrants

NEW YORK—Back home in Guinea, West Africa, Nasser Diallo had a law degree and a good job working as a political journalist for a radio station. That all came to an end in 2009, he said, when the military abruptly opened fire at a protest he was covering, massacring dozens “until they ran out of bullets.”

Diallo never went home again. Word reached him that the military government was hunting him, he said. Fearing the worst, he fled to Paris, and then to the U.S., where he was granted political asylum. But once here, Diallo’s career stalled. Without university transcripts, he said, he couldn’t find work commensurate with his experience.

“I had to make a very, very tough choice to go back to school and restart from scratch,” says Diallo, 33. “I didn’t have a choice. I was going nowhere. By the time I’m going to graduate, I’ll be maybe 50.”

Diallo is part of America’s rapidly growing population of black immigrants from sub-Saharan Africa, many of whom are highly educated and underemployed. Although a handful of states are attempting to help expats like Diallo climb the economic ladder, many African immigrants face obstacles, including obtaining licenses that states require to work in educational, medical and other professions.

At home, they were doctors, lawyers, accountants or professors. Here, they are cabdrivers, parking lot attendants, cashiers or nannies. They often live in poverty, though as a group they are more likely to hold a bachelor’s degree or higher than any other immigrant group, according to the Migration Policy Institute (MPI), a think tank based in Washington, D.C.

(One exception to this: Refugees, who have a different immigration status from political asylees like Diallo, tend to be less educated, demographers say.)

“We’ve all heard about brain drain,” said Jeanne Batalova, senior policy analyst with the MPI. “This is brain waste.”

According to the MPI, one in five college-educated immigrants from all countries is unemployed or underemployed.

Obstacles to Moving Up

Other immigrant groups, like Latin American professionals, face similar challenges. But African immigrants in general have a harder time integrating into the American workforce, demographers say.

Africans from relatively prosperous, English-speaking countries such as Nigeria, Ghana and South Africa have an easier time navigating the system, according to Jeff Gross, director of the New Americans Integration Institute at the Massachusetts Immigrant and Refugee Advocacy Coalition (MIRA).

The reasons—from a lack of professional networks to cultural barriers to misguided advice to racial discrimination—are complex, demographers say. Many African immigrants educated abroad have trouble getting licensed in the U.S.—and licensing requirements vary widely from state to state and from profession to profession.

A law degree from a West African university is the equivalent of a bachelor’s degree in the U.S. Then again, an engineer will have a much easier time than say, a doctor who graduated from medical school in Senegal. That doctor faces hurdles getting licensed and may have to start all over again—and then wait years to get placed in a postgraduate residency training program, Gross said.

“If you’re a nurse or a doctor, there are so many federal and state requirements that you have to fill. It’s very, very complicated and time consuming,” Gross said.

Whatever the profession, Gross said, “foreign degrees in general are often less valued than U.S. degrees.”

Many immigrants pay hundreds of dollars to a service to validate their educational credentials. Some services are “rip-offs,” others are legitimate, Gross said. Even in the latter case, different states accept documentation from different credentialing services.

“And if you don’t come to a job interview and approach it with an American attitude, an American style and an American resume, that credentialing document won’t do you much good,” Gross  said.

Some states are trying to streamline the process. Michigan, for instance, worked closely with Upwardly Global, an employment advocacy agency for immigrants, to craft clear-cut licensing guides for 20 professions, so immigrants know exactly how to proceed, said Karen Phillippi, deputy director of the Michigan Office for New Americans. The state plans to add 10 new guides each year.

Last year, the state passed a "Barber Bill." In the past, barbers needed 2000 hours of training to get licensed. Now, experienced barbers who can prove they have recent experience and training can drastically reduce the number of instruction required to get a license. Meanwhile, African-style hair braiders have sued in 12 states, arguing that strict licensing requirements impede their ability to earn a living.

In February, a bill was introduced in the Illinois General Assembly declaring a legal immigrant cannot be denied a professional license because of their federal immigration status. Some cities have become part of a Welcoming America network, crafting policies to aid immigrants. The program started 10 years ago in Tennessee and expanded to a national initiative. Shelbyville, Tennessee, which experienced a sudden influx of Somali immigrants, was one of the first cities to tackle this approach, said Rachel Peric, Welcoming America’s Deputy Director.

“The dividends of investing in this community have a multiplier effect,” said Tadd Wamester, director of regional growth and online programs for Upwardly Global. “This should be looked at as going across generations. Investing in parents is also investing in children.”

Forty-nine percent of sub-Saharan African immigrants are naturalized citizens, compared to 47 percent of all immigrant groups, according to the MPI.

Most African immigrants arrive through the “diversity visa,” a lottery system designed to increase immigration from underrepresented nations, or they are sponsored by family members already in the country, according to Kevin Thomas, associate professor of sociology, demography and African studies at Pennsylvania State University. The yearly number of visas awarded through the diversity program is capped at 50,000 each year, he said. (Others arrive as refugees, he said.)

The diversity visa winnows applicants to the “best of the best,” according to Thomas. Applicants must have at least a high school degree or have at least two year’s work experience in a career that requires at least two years of vocational training. Many African immigrants have considerably more education. About 38 percent have a bachelor’s degree or higher, compared to 28 percent of the total U.S. foreign-born population and 30 percent of the U.S.-born population, according to the MPI.

“If you’re a high school dropout and you apply for a visa at the American embassy, you’re not going to get it,” Thomas said.

When they arrive in the U.S., many Africans feel the pressure to get a job, fast. In 2013, according to the MPI, 76 percent of them were working in the civilian work force, compared to 67 percent of the overall foreign-born population and 63 percent of native-born Americans.

The pressure to find a job, any job, means that they often find work beneath their skill level, social scientists say. When he first came to the U.S., Diallo said, he stayed with his uncle, who urged him to forget about his dreams of professional glory and drive a cab. “You have to survive,” his uncle told him, “you don’t have to aim high.”

Other immigrants, faced with the barriers of licensing and trying to get university transcripts from war-torn countries, give up completely. There are bills to be paid, family to take care of back home.

“When you are a professional in your country of birth, you come here and you think, ‘Do I have to go back to school?’” said Coumba Gueye, who hails from Senegal and now counsels other African immigrants on housing for the African Services Committee in Harlem.

“It happened to my father. He was a teacher back home, but he ended up doing meaningless jobs,” Gueye said. Her brother tried going back to school, she said, but dropped out to drive a cab to support his family.

For his part, Diallo said, he had to break out of the insular world of his community.

“You have to be strong-minded,” said Diallo. Through networking, he found out about the training programs at Upwardly Global and now works as an intake associate with new members. “The people in your community aren’t really connected to opportunities.”

He tells new immigrants it’s crucial to understand American culture. Case in point, his first job interview: When the interviewer said, “Tell me about yourself,” Diallo did what they do in Guinea. He told them all about his family. In excruciating detail.

“It was hilarious,” Diallo said, laughing. “I was going on and on and no one told me, that’s not what they wanted to know. I walked out of that interview, confident I had a job. I never heard from them again. Now, I understand what I was doing was inappropriate.”

At the “African Market” on 116th Street in Harlem, expats peddle everything from shea butter and wooden sculptures to jewelry and ornately patterned fabric.

Business is slow, so Haddi, the proprietor of Fatima’s African Hair Braiding and Boutique, takes advantage of the downtime to braid her youngest daughter’s hair.

Back home in The Gambia, West Africa, Haddi, 55, said she had a college degree and a cushy bank job. Twenty-six years ago, she moved to New York to be with her husband who was studying there.

Adjusting to American-style racism was tough. “They tell you to go back to Africa, even though their family are immigrants, too,” said Haddi, who asked just to be identified by her first name only because she doesn’t want to offend her family.

Eventually, she found work on an assembly line. She just wanted to do something, anything. Later, she opened her own hair-braiding salon on the side. Weekdays were spent at the factory; weekends were spent at the salon.  Four years ago, she became a U.S. citizen.

It’s how she and her husband put two kids through prep school and then college. Now, she’s got one more kid to get through to the finish line.

“I want my children to have the education I didn’t have,” said Haddi, who now spends all her time at her boutique in the African market. “Yes, I went to college. But I want more for them. All parents want more for their children.”