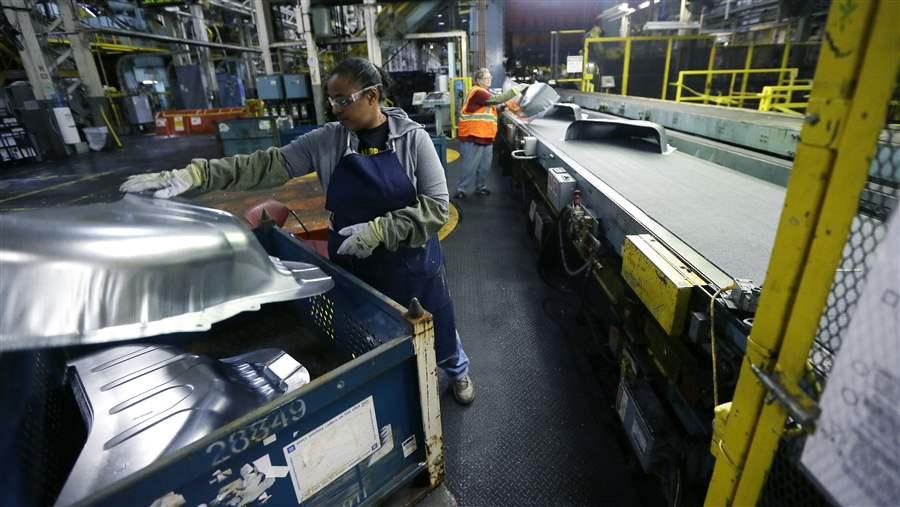 Michelle Albritton loads stamped wheel housings in a GM plant in Pontiac, Michigan. Michigan, which had the highest unemployment rate in the nation during the recession, is among the states that have created the most jobs since the downturn. (AP)

Although the nation’s unemployment rate is at a seven-year low of 5.4 percent, job growth among the states has been uneven, with several showing only meager gains more than five years removed from the depths of the Great Recession.

A Stateline analysis of states’ employment data shows that while all states have added jobs since their economies hit their nadir during the recession, some have added far fewer than others. Ten states (Alabama, Arkansas, Maine, Mississippi, Missouri, New Hampshire, New Jersey, New Mexico, Pennsylvania and West Virginia) have seen total employment grow 5 percent or less compared to their lowest points, according to the analysis of Bureau of Labor Statistics data.

On average, employment has increased 8 percent among all 50 states and the District of Columbia since each one’s individual nadir.

To calculate job growth, Stateline identified each state’s lowest level of employment since January 2008 (the recession officially began in December 2007), and compared that figure to the state’s March 2015 employment level, the most recent number available. The result is a state-by-state measurement of job growth since the recession.

Maine and West Virginia have seen the least growth, with employment increasing less than 3 percent in those states since they hit their lowest levels in 2010. Mississippi, Missouri and New Mexico have experienced less than 4 percent growth. In 21 states, employment has increased less than 7 percent.

North Dakota has led the way thanks to its oil boom. Employment there has jumped more than 28 percent since April 2009, the earliest low point of any state.

In raw numbers, the 50 states and the District have added nearly 12 million jobs since each one’s lowest employment level.

The most populous states—California, Florida, New York and Texas—dominate the growth in sheer numbers.

Michigan may be the biggest success story. By many economic measures, including employment rate and overall job loss, Michigan fell further than any other state during the recession. But Michigan has added 417,900 jobs since its low point in March 2010, placing it fifth in overall employment growth. Employment in the state is up nearly 11 percent, to 4,246,400 in March—about 10,000 more jobs than it had in January 2008.

Twenty-one states hit their Great Recession employment low in February 2010, according to Stateline’s analysis. The second most common low point was December 2009, which was the nadir for nine states. Seven states saw employment hit bottom in January 2010.

Every state plus the District experienced its lowest point in employment between April 2009 and September 2010. The District and North Dakota bottomed out first, while Arizona, Nevada, New Jersey and New Mexico were the last four to hit bottom in late 2010, nearly three years after the recession began.