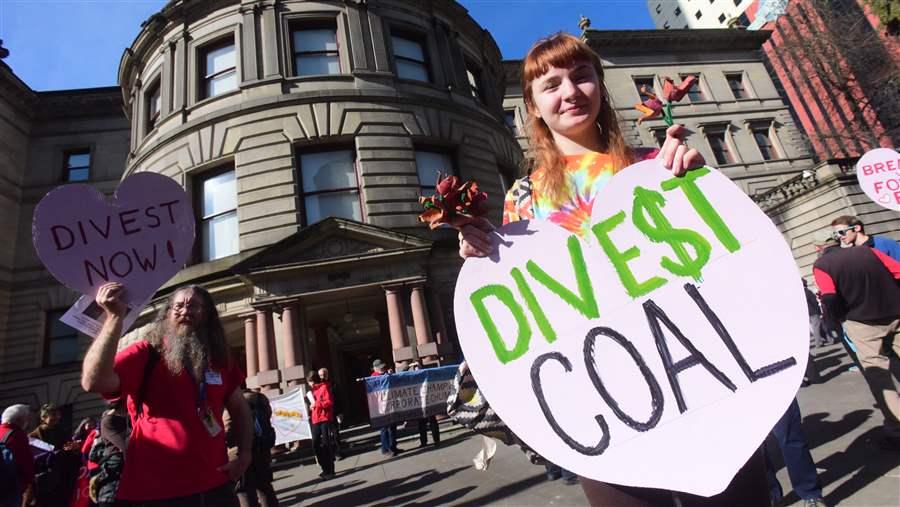 Activists demonstrate outside City Hall in Portland, Oregon, urging the mayor to divest the city’s holdings in fossil fuel companies. Several states are considering bills that would have state pension systems divest their coal and oil stocks. (AP)

Some state lawmakers are pushing public pension funds to dump stock in the fossil fuel companies they blame for climate change. But those in charge of the investments worry that a largely symbolic act will have a real-world impact on vulnerable retirees.

In California, Connecticut, Hawaii, Massachusetts and Vermont, lawmakers considered bills this year that would have required public employee pension funds to divest their holdings in coal, oil, or both. The bills did not get much traction, even in those reliably blue states, and no state has yet followed the lead of the more than 20 universities and 30 cities that have divested.

Undaunted by this year’s failures, supporters say the divestment bills were only the opening salvos in what they expect to be a long battle.

“Twenty years ago you wouldn’t be able to get the same type of returns without investing in fossil fuels, but today that’s not true,” said Hawaii state Rep. Chris Lee, a Democrat who sponsored a bill that would have required the state’s Employees’ Retirement System to divest $366 million in direct holdings in fossil fuel companies.

The divestment bill was one of several Lee proposed to push Hawaii in a greener direction. Another, which requires utilities to use 100 percent renewable energy by 2045, passed both houses of the legislature. Democratic Gov. David Ige’s office wouldn’t say whether he would sign it.

“Even in a state like Hawaii—where climate change is acknowledged by business leaders, political leaders, community leaders—people fail to realize what we pay to fight climate change and where our investments are,” Lee said. He noted that Hawaii is already spending millions of dollars to fight beach erosion.

“It doesn’t make any sense to be on the one hand trying to fight climate change and then invest in the companies causing it,” Pollina said.

A Seat at the Table

State legislators say their biggest adversaries have been members of the boards overseeing state pensions. Many of the members worry about making required returns, and argue that states are better off having a seat at the table to help shape fossil fuel companies’ policies.

Vermont State Treasurer Beth Pearce, who is vice chair of the Vermont Pension Investment Committee, said her opposition to divestment is not based on her views on climate change.

“I very strongly agree there are threats from climate change; and they are acute, and we need to do something about it,” Pearce said.

But Pearce says her first responsibility is to Vermont’s 48,000 pensioners. She said divesting from the top 200 fossil fuel companies, as Pollina’s bill requires, would make it difficult for her achieve the investment returns needed to maintain the health of the fund.

Pearce said both an in-house and independent study came to the same conclusion: that Vermont would lose about $10 million a year if it were to divest its nearly $105 million currently in energy-sector investments.

The state does offer employees the ability to invest in a fossil-free fund, in addition to their standard retirement packages. But as of April 2015, only 171 employees invested in the fund, with assets totaling about $517,000.

Pearce said she views engagement as a way for states to maintain their fiduciary responsibilities while voicing concerns over company practices. She said the state has a say through shareholder letters, resolutions and votes.

Vermont has been part of a number of shareholder resolutions, including one that passed in April requiring BP to increase its reporting on climate change risks. Another recently filed resolution would require ExxonMobil to adopt quantitative goals for reducing greenhouse gas emissions. Pearce said another letter to Krispy Kreme and Dunkin’ Donuts caused the companies to agree to get palm oil from suppliers that are not clear-cutting rain forests.

“Giving up your seat at the table is not a productive strategy,” Pearce said. “If you divest, you no longer have a share of that company and you can’t exercise your voting rights to change that company. Someone else can purchase that stock, and they may not share our environmental values.”

Massachusetts state Sen. Benjamin Downing, a Democrat, who proposed a bill to divest the state’s pension from all direct and indirect holdings in fossil fuel companies, said he is “the last person that would flippantly propose something for the state pension system,” since his family greatly benefited from the system when his father died suddenly. “I didn’t have to worry about whether my mother would be able to make her mortgage payment,” Downing said.

But Downing is concerned about climate change, and he said he has little faith that engagement strategies will work to get fossil fuel companies to address it.

“I don’t know how ExxonMobil changes in a way that’s good for the climate,” he said. “I would love for them to say, ‘The science is too real. We’re changing our business model.’ But you can’t cajole or convince the most profitable companies in American history to fundamentally change their business model.”

That profitability may be why some pension managers are hesitant to divest, but Downing said regulatory changes are quickly making fossil fuels risky investments. Both he and Vermont’s Pollina said indexes without fossil fuel investments are performing well.

To combat concerns, many of the bills phase-in divestments over five years, and some would halt the process if overall returns drop by half a percentage point. Yet pension investors remain hesitant.

In San Francisco, the city’s pension board has delayed divestment and is instead balancing engagement strategies with an initial investment in a fossil-free fund.

City Board of Supervisors member John Avalos has been frustrated by the progress, since the city agreed to his divestment proposal in 2013. His measure gave the San Francisco Employees’ Retirement System (SFERS) five years to fully divest, and in two years they’ve moved from studying the issue to working on engaging with the fossil fuel companies that hold $541 million of their assets, or 2.7 percent of their $20 billion fund.

With the vote to move to engagement came an announcement that SFERS would be making a new $100 million investment in a fossil-free fund, though it has not divested from any existing holdings.

Avalos said he views the investment as a $100 million experiment while engagement is just another way to delay divestment by a group that has been resistant every step of the way.

“I don’t think it’s an effective strategy towards divestment, but it’s a step we have to take for the (investment) committee to feel comfortable with change,” he said.

California May Be First

Divestment has been a simpler process in some other California cities. For example, Santa Monica committed to divestment in 2013, only to discover that it had few fossil fuel investments—about $700,000 in the fund for the city’s cemetery.

Santa Monica Mayor Kevin McKeown said divestment was easily accomplished within a year and has not had a negative effect on the fund. He said that with the exception of some very large vehicles, the city has converted its fleet, including buses, to electric and alternative fuels like biodiesel and compressed natural gas.

California may be the state most likely to have its pensions divest, at least from coal. Senate Pro Tem Kevin De León has introduced a bill to get the nation’s largest pensions for state employees and teachers to divest from coal.

At an April meeting, the California State Teachers’ Retirement System (CalSTRS) decided to reevaluate its coal holdings. CalSTRS has begun the engagement process with several companies “to determine whether they have considered the various scenarios under which existing reserves could become sequestered or stranded,” the agency wrote in its testimony on the bill, adding that the investments would be sold if deemed risky.