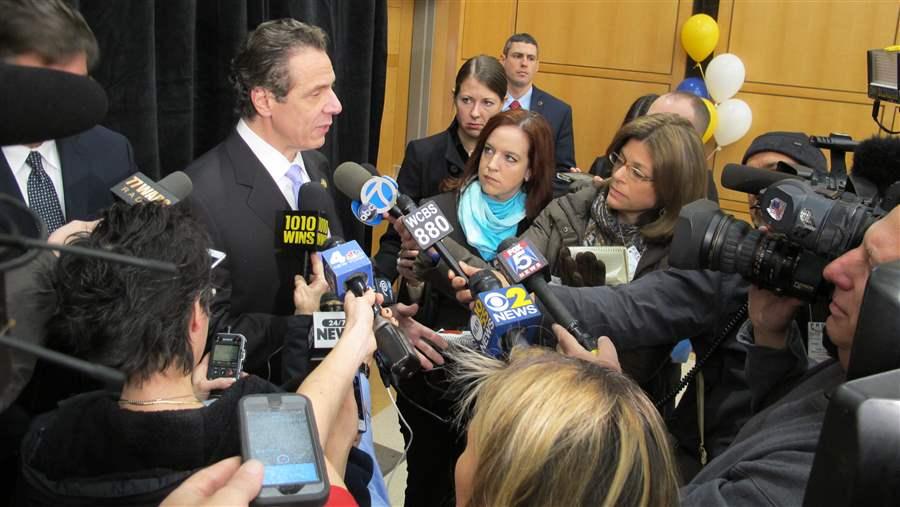 Democratic Gov. Andrew Cuomo of New York speaks to reporters about his proposal to offer a $1.7 billion property tax credit for homeowners and renters. His was among proposals in several states this year to provide tax relief for property taxpayers. (AP)

With some of the highest median property taxes in the nation, it’s no surprise that relief is at the top of many political agendas in New York, Connecticut and New Jersey.

Counties that surround New York City in those three states account for 18 of the 20 highest-taxed counties in the nation, according to a Stateline analysis of the U.S. Census’ 2013 American Community Survey data, which is the latest available.

But they aren’t the only states where homeowners feel pressure from property taxes, which are rising faster than inflation nationally and prompting lawmakers to look for ways to provide relief. Median property taxes rose 57 percent from $1,334 in 2000 to $2,090 in 2013, while inflation was only 35 percent during the period.

Texas lawmakers, for instance, are debating as much as a $2.2 billion cut in property taxes. The median tax bill there is about $2,500. That bill, however, is only about a third of the $7,300 for median property tax New Jersey, and a quarter of the tax bill property owners pay in Westchester County, New York, which has the highest median levy of $10,000.

“If a New Yorker heard about a property tax bill in Texas, he would say. ‘You have nothing to complain about,’” said Scott Drenkard, an economist at the Tax Foundation, a nonpartisan tax policy research group. “But Texans complain about property taxes quite a bit. If you ask them what needs to be cut, the average Texan would say it’s property taxes. It’s the tax policymakers hear the most about from their constituents. It’s the most hated tax.”

Although states generally don’t levy property taxes (Arizona did until 1996, and Minnesota taxes some commercial and seasonal property), state lawmakers routinely look for ways to ease them at the local level with caps, subsidies, exemptions, or changes in the balance between commercial and residential tax rates. In addition to New York, Connecticut and Texas, relief proposals have been up for debate in Pennsylvania, Maine and Nebraska this year.

In New York, Democratic Gov. Andrew Cuomo talked of how “middle- and lower-income families (are) struggling under the crushing weigh of property taxes” in January, when he announced a plan for $1.7 billion in tax credits for qualifying homeowners and renters.

The legislature removed Cuomo’s proposed credit from the state budget in March. But Cuomo has said he’s continuing to negotiate it with legislative leaders and a compromise may be possible next month.

The Connecticut Legislature is considering a bill that would provide property tax relief by giving towns more money from state sales tax revenue. The state issued a report last year showing property taxes were the largest component of taxes collected in the state, raising $9.5 billion annually compared to $5.8 billion in income taxes and $3.4 billion in sales taxes.

In New Jersey, budget constraints last year forced the state to postpone scheduled property tax discounts for elderly, disabled and low-income homeowners, but they’re included in tax bills mailed out this month. A report this year by the state League of Municipalities concluded that property taxes would have to drop 35 percent to bring them into line with comparable suburbs of New York City and Philadelphia.

Maine is considering a plan from Republican Gov. Paul LePage that would remove the property tax exemption that some nonprofits now have starting in 2019. In Nebraska, plans to relieve taxes, for farmers especially, appear dead this year and instead will be studied.

Nationwide, about 75 percent of local tax revenue comes from property taxes, according to a report by the Tax Policy Center in conjunction with the Brookings Institution and the Urban Institute. The percentages range from 32 percent in the District of Columbia and 43 percent in Alabama, to 99 percent in Maine and New Hampshire.

About half of the $446 billion collected from property taxes annually goes to schools, according to a 2007 estimate by the Lincoln Institute of Land Policy, a think tank focused on land use and taxation, which tracks property tax rates by state and tax relief programs up to 2013. The rest goes to police, fire, streets and other local government operations and services.

Capping or cutting property taxes, while popular, doesn’t always provide taxpayers overall relief, however. Drenkard, the Tax Foundation economist, said many attempts at relieving the burden of property taxes only serve to shift the costs of government to income or other taxes.

Because school taxes are such a high proportion of the total property tax bill, many states have started there, offering some homeowners a state subsidy in the form of tax credits or rebates, lightening the load with more state aid to schools or giving homeowners breaks by raising taxes on commercial property.

A New York state program called School Tax Relief (STAR), has offered some homeowners reduced school taxes through tax credits since 1998, with the lost revenue made up by higher state aid to schools.

A 2010 study by Georgia State University’s Fiscal Research Center noted that most comprehensive efforts to overhaul state taxes, including property taxes, have remained on the drawing board.

“Very few of the changes proposed appear to have been adopted,” the study concluded about efforts during the decade of the 2000s.

Although New Jersey has the highest median annual property tax at $7,331, the counties with the highest rates are in New York. Suburban Westchester is the only county in the nation where the median burden is $10,000 or more. Nearby Rockland and Nassau counties are not far behind at $9,667 and $9,522, respectively.

Property tax relief has always been difficult in the New York City suburbs, said Gregory Holtz, a public administration professor at Pace University in Westchester County. Because wealth is so high and homes cost so much in affluent areas, there may not be enough outrage to fuel changes.

“There’s very little potential for reform in New York state,” Holtz said. “Our taxes haven’t gotten that high yet. We’re going to have to be completely overburdened. When taxes are late or going into default, that’s a true sign of tax revolt or reform, and that’s not happening yet.”