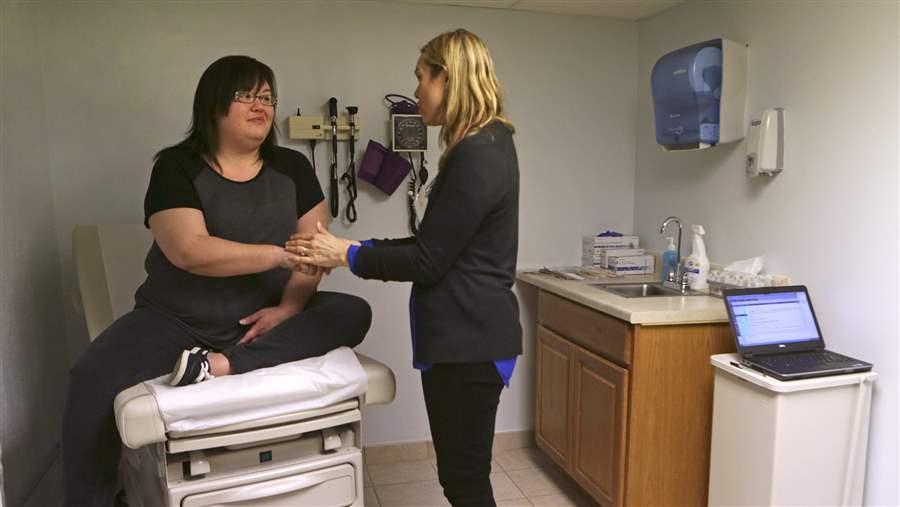 Dr. Amy Hilmer, right, greets a patient at Places for People, a provider of mental health services in St. Louis. Nearly half the states have mental health parity laws, but few are diligently enforcing them. (AP)

Under federal law, insurance plans that cover mental health must offer benefits that are on par with medical and surgical benefits. Twenty-three states also require some level of parity.

Federal and state regulators have an easy time keeping track of copayments and deductibles, and insurers typically follow those rules. Compliance with parity requirements for the actual delivery of medical services is another story.

But among states, only California and New York consistently enforce the rules, mental health experts say. As a result, Americans with mental illness and addictions “don’t have a right to mental health and addiction treatment that the law promises,” said Emily Feinstein of CASAColumbia, a nonprofit organization focused on drug addiction.

In a report released last month, the National Alliance on Mental Illness found that patients seeking mental health services from private insurers were denied coverage at a rate double that of those seeking medical services. The report also found that patients encountered more barriers in getting psychiatric and substance use medications.

One major roadblock is that health insurers usually do not disclose policies for determining if a treatment is medically necessary. Without that information, it is difficult for regulators and consumers to determine whether the denial of coverage is warranted.  Although the federal parity law requires insurers to divulge that information to patients and doctors upon request, critics and plaintiff attorneys say insurers are still keeping too much hidden and states aren’t diligent in forcing disclosure.

“The fact that health plans have not been transparent about approving or denying care means that providers are flying blind and consumers are losing out,” said Sita Diehl, director of state policy and advocacy for the National Alliance on Mental Illness.

Another problem has been the federal government’s long delay in coming up with regulations to implement the 2008 parity law. The U.S. Department of Health and Human Services finally issued rules for most commercial insurance plans at the end of 2013, and they took effect last July. The final rules for Medicaid managed care plans won’t be in place before the end of 2016—at the earliest. (Medicaid fee-for-service plans and Medicare remain exempt from the federal parity law.)

Mental health advocates are hopeful that as the federal rules take effect for insurance plans issued after July 1, 2014, they will give regulators a stronger hand in enforcing parity.

The Affordable Care Act also has complicated matters, according to advocates. Implementing the extensive new health care law so overwhelmed the states and federal government that ensuring compliance with parity laws simply got pushed aside.

But some believe the main barrier to enforcement is the same one that led to inferior mental health benefits in the first place: the stigma associated with mental illness and addictions.

“I can’t help but feel that the stigma associated with having a mental health or developmental disability impacts the zeal with which regulators want to get in on this issue,” said Ele Hamburger, a Seattle attorney who said she has won more than a half-dozen settlements against insurers on parity grounds. “That stigma is so widespread.”

Two months ago, New York state Attorney General Eric Schneiderman announced that Beacon Health Options had agreed to a $900,000 settlement after a state investigation revealed that the company denied coverage for mental health and substance use services at twice the rate its affiliated insurers had rejected claims for medical and surgical services. Beacon administers behavioral health benefits for 2.7 million New Yorkers.

Schneiderman, a Democrat, has reached settlements in five cases involving health plans covering a total of 4 million New Yorkers. He is the exception: No other state attorney general has sought sanctions against insurers for violating state or federal laws requiring mental health parity, according to New York officials.

“Obviously, Attorney General Schneiderman is really a hero in terms of this movement,” said Patrick Kennedy, a former Democratic congressman from Rhode Island. The Kennedy Forum, which he founded after leaving Congress in 2011, promotes mental health parity.  “If he’s found a consistent pattern and practice of discrimination in his state, it’s only logical that there are similar practices in other states in the country. They can’t just be picking on New Yorkers.”

According to Kennedy, California and New York are the only states that consistently enforce mental health parity. Before it authorizes a health insurance plan to operate in the state, California scrutinizes it to determine whether its coverage meets parity requirements. Once an insurer is cleared, state regulators closely monitor it and can impose a financial penalty if it doesn’t live up to its promises.

Hamburger, the Seattle attorney, said that some of her clients whose insurance companies denied their mental health or substance use claims appealed to the state of Washington for help, but did not receive any.

Stephanie Marquis, a spokesman for the Washington insurance commissioner, said the state was still working on regulations to support the state parity law in 2014 when the state Supreme Court ruled in favor of some of Hamburger’s clients. Marquis said the court gave the state guidance on how it should enforce parity. Now that the state has its own rules along with the federal ones, Marquis said her office “will be using the new parity analysis tools we have in place” to evaluate 2016 insurance plans.

With their superior resources and investigative powers, state regulators and law enforcement agencies are able to review claims records and internal company policies in a way that consumers or private lawyers cannot.  Hamburger said that private lawyers can force insurers to disclose the information through discovery, but that requires a lawsuit and perhaps months or years of delays for a person who may need help immediately.

“These laws need to be enforced by government entities because it’s all about doing comparisons between data sets,” said Lisa Landau, chief of the New York attorney general’s health care bureau, which brought the cases against the insurers in New York.

New York passed its state parity law in 2006. By 2011, Landau said, officials began to notice an alarmingly high number of complaints to the attorney general’s health hotline regarding the denial of claims by health insurers for mental health addiction treatments.

Investigators found that some insurers were denying nearly half of all claims for substance abuse treatment, Landau said. They also discovered exclusions for some types of treatment for certain mental illnesses, such as eating disorders. And patients with mental illnesses were often forced to make a certain number of outpatient visits before gaining approval to enter a residential facility. That so-called “fail first” process is nearly unheard of on the medical and surgical side.

Landau said that when her office began its investigations, it looked around the country to review other states’ enforcement actions. “We didn’t see any,” she said.

Aside from Beacon Health Options (formerly known as ValueOptions), Schneiderman has reached settlements with four other health plans: EmblemHealth and MVP Health Care, both of which subcontracted administration of mental health and substance use claims to Beacon; Cigna; and Excellus Blue Cross Blue Shield. Since the settlements, Landau said, 45 percent of previously rejected mental health and substance abuse claims have been overturned on appeal.