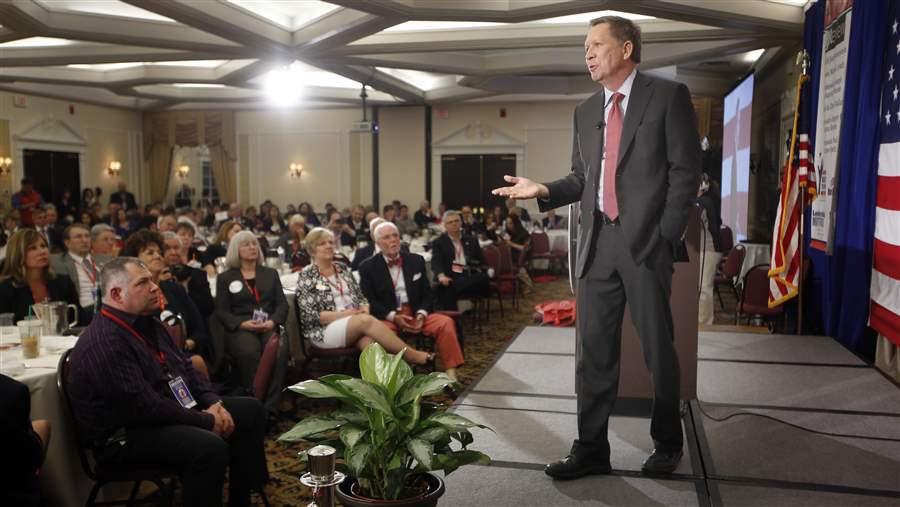 About a half-dozen states are considering cutting income taxes and simultaneously increasing sales or excise taxes — sparking debate on whether wealthier taxpayers will benefit disproportionately at the expense of those living on lower incomes.

The offsets often are proposed as a way to comply with state balanced-budget laws. Or, cuts in income taxes are proposed as part of political deals to balance raising gasoline or other excise taxes. But the effect is the same: The tax burden is being shifted at a time when there’s growing concern over income inequality.

Arguments in support of the shift, which is mostly playing out in Republican-dominated states, are that cutting income taxes for households and businesses will create jobs, and that putting money in the pockets of taxpayers of all incomes helps stimulate the economy. The counter argument is that sales and excise taxes are more regressive than income taxes because poorer families spend a higher percentage of their income on basic goods and services.

Every state already relies on a regressive tax system, although some states depend on sales and excise taxes more than others, according to the Institute on Taxation and Economic Policy, a liberal think tank. A 2015 ITEP study found that the effective state and local tax rate burden was 10.9 percent of income for those in the bottom 20 percent of income, but just 5.4 percent for those in the top 1 percent.

Many proposals under debate in the states would continue the trend.

To partially offset the cuts, Kasich proposes increasing the state’s sales tax from 5.75 percent to 6.25 percent and broadening it to cover more goods and services. He also wants to increase the cigarette tax a dollar to $2.25 a pack, hike taxes on other tobacco products and impose a tax on “vaping,” products which deliver nicotine without tobacco.

Kasich argues that the tax cuts would make Ohio more attractive to business, boosting the state’s economy. He said cutting income taxes puts more money in taxpayers’ pockets, allowing them to decide whether to spend those dollars buying goods that are subject to sales taxes.

Kasich’s argument is that lower taxes lead to investment and job creation.

“We’ve got to get people jobs. The single biggest cure for poverty is a job, OK? And that’s what I’m out to do in Ohio,” Kasich told reporters last week at a luncheon in Washington sponsored by The Christian Science Monitor.

But John C. Green, director of the Ray C. Bliss Institute of Applied Politics at the University of Akron, said Kasich’s plan shifts the tax burden in favor of wealthier taxpayers at the expense of lower income taxpayers.

“Certainly many of the taxes the governor wants to raise would be regarded by economists as regressive,” Green said. “The income tax in Ohio mostly applies to rich people. When you lower income taxes, it benefits wealthy people.”

“I think some of the regressivity concerns over sales taxes are overblown,” Williams said. “Many states exempt food and clothing from sales taxes, and there are no sales taxes on purchases with EBT (food stamp assistance debit) cards. For the truly needy out there, they are not being disproportionately affected.”

The Ohio House has passed a far different budget. It calls for reducing upper income tax rate from 5.33 percent to 4.99 percent, far less than Kasich wanted, and scraps his plans to increase sales and other use taxes. The Ohio Senate has yet to act. Lawmakers have until the end of June to resolve the budget. 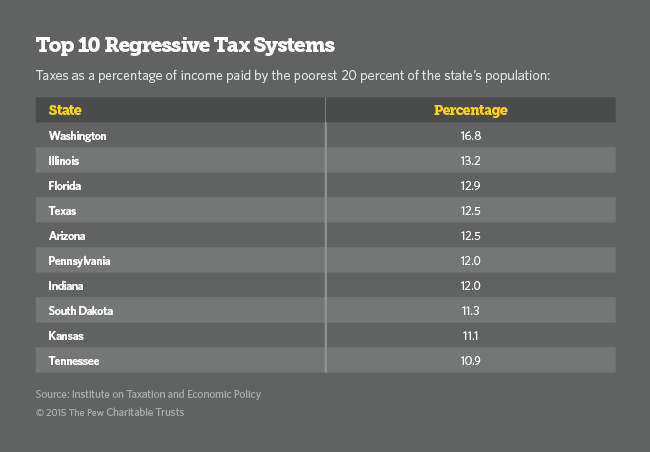 Offsets in Other States

In Maine, Republican Gov. Paul LePage has proposed eliminating the income tax over three years while raising and broadening the sales tax to apply to more goods and services. He argues that the sales tax, along with higher taxes on hotel rooms, rental cars and restaurant meals, are often paid by tourists, while the income tax hits working Mainers.

LePage also has proposed eliminating the estate tax, getting rid of the property tax exemption for non-religious non-profits with a value of more than $500,000 and eliminating state revenue sharing with municipalities. Cities argue they would have to raise property taxes to make up for the lack of revenue sharing, further hurting Maine residents. The legislature is taking a skeptical look at these plans.

In South Carolina and New Jersey, Republican governors or majority GOP legislatures are talking about cutting income taxes or inheritance taxes to make an increase in the gasoline tax more palatable.

In South Carolina, Republican Gov. Nikki Haley has recognized that the gas tax needs to go up to support the state’s transportation system, but says she won’t agree to that without an offsetting income tax cut. Her plan would cut income tax rates from 7 percent to 5 percent over a decade and increase the gas tax from 16 cents a gallon to 26 cents a gallon.

The South Carolina House and Senate have passed different plans. The House version imposes a 6 percent excise tax based on the wholesale price of fuel. The Senate plan raises the gas tax by 12 cents a gallon and imposes more fees on hybrid and electric cars, but doesn’t touch income tax rates.

In New Jersey, some lawmakers have advocated a cut in the state’s estate and inheritance taxes to make way for an increase in the gasoline tax, which is the second lowest in the country at 14.5 cents a gallon  (Alaska’s is the lowest).

Republican Gov. Chris Christie hasn’t made his preferences known, saying only that “everything is on the table” in the budget discussion. The legislature is considering raising petroleum taxes at the wholesale level, which would translate to an increase of about 25 cents a gallon, according to Gordon MacInnes, president of New Jersey Policy Perspectives, a liberal study group. That’s a big jump, but it would still put New Jersey’s gasoline tax below neighboring New York (49.9 cents a gallon) and Pennsylvania (41.8 cents a gallon).

A broad coalition that includes business groups favors an increase because New Jersey’s infrastructure is crumbling. But the entire New Jersey House is up for re-election this fall, and many members are looking for cuts in other taxes to help shift part of the burden.

Rep. Jay Webber, a Republican, said that any gasoline tax must be accompanied by cuts that will help alleviate, or at least not increase, the burden on all citizens. Webber has called for elimination of the “death tax,” a favorite political name for the estate tax. He has called the estate tax one of the “state’s biggest obstacles to economic growth.”

“I and a number of other Republicans are going to insist on a tax cut so the most over-taxed people in the state don’t have another tax on their backs,” he said.

But a break in estate taxes won’t benefit poor citizens while they’re paying higher taxes at the gas pump, according to MacInnes, who advocates an increase in the state’s earned income tax credit to offset the proposed gasoline tax hike for lower-income people.

“It (the gas tax hike) disproportionately affects the lower income people in the state,” he said.