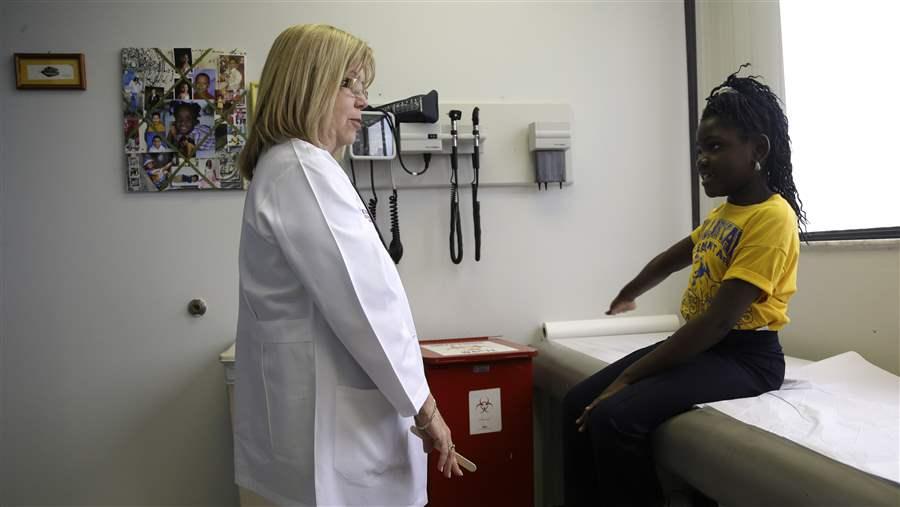 The federal government is quietly warning states that failure to expand Medicaid under the Affordable Care Act could imperil billions in federal subsidies for hospitals and doctors who care for the poor.

In an April 14 letter to Florida Medicaid director Justin Senior, Vikki Wachino, acting director of the U.S. Centers for Medicare and Medicaid Services (CMS) wrote: “Uncompensated care pool funding should not pay for costs that would be covered in a Medicaid expansion.”

Medicaid is the joint federal-state government health insurance program for the poor. Under the Affordable Care Act, states can choose to expand coverage to more people, with the federal government paying the entire costs of expansion through next year.

Florida has asked CMS to renew $1.3 billion in federal funding for its 2016 “low-income pool,” even though the state has rejected Medicaid expansion.  CMS maintains that any extension must take into account the more than 800,000 residents whose medical bills would be covered by Medicaid were the state to expand the program.

In addition to expanding Medicaid coverage to adults with incomes at or below 138 percent of the federal poverty level ($16,242 for an individual), CMS said Florida and other states should strive to pay safety-net providers fair market prices for their services, instead of using federal money to supplement inadequate state Medicaid payments.

For decades, states and the federal government have provided so-called “supplemental” payments to health care providers that serve large numbers of patients who are unable to pay their bills. Without that extra revenue, hospitals and doctors in low-income neighborhoods say they would be unable to keep their doors open.

“Hospitals are all for Medicaid expansion, but they still will need additional funding,” said Barbara Eyman, Washington counsel for America’s Essential Hospitals, which represents most of the nation’s safety-net hospitals. Hospitals that serve large Medicaid populations operate at negative profit margins, because Medicaid reimbursement rates are significantly lower than those of Medicare and private insurance, she said.

According to the independent Medicaid and CHIP Payment and Access Commission, states and the federal government spent $43 billion on these extra payments in 2011, with wide variation among states. Of that, more than $17 billion came from “disproportionate share hospital” payments that all 50 states use to varying degrees under the Medicaid law. The rest are funding agreements negotiated between CMS and individual states under a waiver process.

With the Florida letter and subsequent phone calls to other states, CMS “is signaling it intends to restrict these funds, particularly in states that choose not to reduce uncompensated care by enrolling low-income adults in Medicaid,” said health care expert Deborah Bachrach of the law firm Manatt, Phelps & Phillips.

Under the original assumption that all states would expand Medicaid (in 2012, the Supreme Court ruled that states could choose whether to expand or not) and uncompensated care would decline, the Affordable Care Act called for reductions in the federal share of supplemental funding starting in 2014. But Congress has repeatedly postponed those cuts, pushing any reductions to 2018 as part of a law passed in April that repealed the so-called “sustainable growth rate” formula for reducing Medicare spending.

U.S. hospitals provided more than $50 billion in uncompensated care in 2013. According to U.S. Department of Health and Human Services estimates, that number dropped by $7.4 billion after more people became insured under the Affordable Care Act in 2014. Medicaid coverage in expansion states accounted for $5 billion of the decline.

Five states that have expanded Medicaid receive the supplemental funding. California’s expires in October, and Arizona’s expires in December. Hawaii’s funding expires in June 2016, New Mexico’s in December 2018 and Massachusetts’ in June 2019. In those states, actual reductions in uncompensated care will be taken into account when negotiating an extension of the funding.

The federal government will scrutinize states’ future supplemental funding requests, including a pending proposal from Alabama, in light of the state’s decision on Medicaid expansion.

In a federal lawsuit filed last week, Florida’s Republican Gov. Rick Scott claimed the policy shift was an “attempt by the federal government to do precisely what the Supreme Court held just three years ago that the Constitution prohibits it from doing—namely, coerce states into dramatically expanding their Medicaid programs by threatening to cut off federal funding for unrelated programs unless they ‘agree’ to do so.” Scott announced Monday that Texas and Kansas would file amicus briefs supporting Florida.

The same day Florida filed its lawsuit, the state’s Republican-led House of Representatives took the unprecedented step of closing its doors three days early after a row with the Senate over whether to expand Medicaid. (The Senate is for, the House against.) Scott, who once said he supported expansion, now opposes it.

The House’s abrupt exit left the state’s $77 billion budget and dozens of other bills up in the air. Leaders of both houses must now agree on a special session to resolve their differences over Medicaid expansion in time to pass a budget by the state’s June 30 deadline.

'Negotiated in the Dark'

For years, state Medicaid programs have drawn down billions in federal money for safety-net hospitals by taxing health care providers to create state matching funds. In a 2012 report, the Government Accountability Office called for greater federal oversight of the funding program and more transparent accounting from state Medicaid agencies.

According to Georgetown University health policy expert Joan Alker, “supplemental funding waivers were negotiated in the dark.” In Florida’s case, “it was a special deal between then-President (George W.) Bush and Governor (Jeb) Bush,” she said. The new CMS policy should add more transparency and accountability to the process, she said.