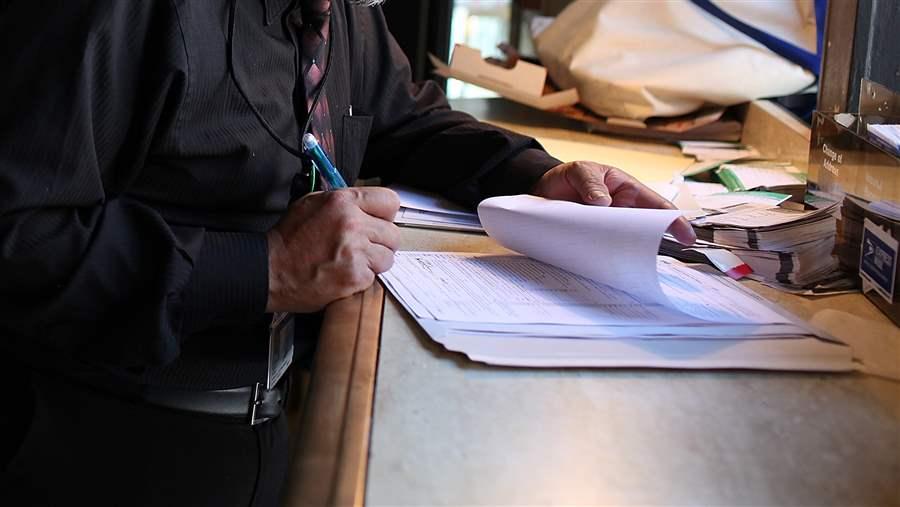 This story was updated to reflect the fact that the Maryland amnesty program signed by the governor does not exclude taxpayers who have 500 or more U.S. employees.

Dear state tax delinquents: We want you back. All is forgiven.

Well, not quite all. But cash-strapped states are looking to tax amnesty programs that give scofflaws a bit of a break on penalties and interest if they own up and pay up. The programs bring needed revenues to states struggling to balance their budgets and encourage taxpayers to get back into the system as law-abiding tax filers.

Several states already have tax amnesties in progress or pending this year, while others are considering such programs as part of broader budget or tax reform packages.

“I think it’s just kind of an easy way of plugging a budget hole. You get some revenue out of it, and if you don’t do it too often, it’s pretty effective,” said Mandy Rafool, a state policy expert at the National Conference of State Legislatures (NCSL). “It doesn’t generate much money,” but “it’s pretty painless,” she added.

So far, 10 states have instituted or are considering various tax amnesties this year, according to research compiled by the Council on State Taxation and the NCSL. Details vary, including the time period, type of taxpayer covered, and the amount of interest waived. But the goals are the same: quick cash for states, and a way out for people who owe money and have been fearful of coming forward.

“This is an opportunity to come clean,” said Jarrod Coniglio, deputy secretary of Louisiana’s Department of Revenue, which has collected more than a half billion dollars from its multiyear tax amnesty program.

States are never sure how much money an amnesty program will bring in, since it’s difficult to predict how individuals and businesses will respond. Some states keep it small and targeted. California, for example, has a program offering relief from penalties for a certain type of taxpayer who voluntarily discloses the delinquency, while North Carolina is trying to get unpaid trust taxes. But proponents argue that any income at all is welcome, and the programs free state workers from chasing down tax delinquents.

Massachusetts expects to recoup $18 million from a two-month tax amnesty that ends May 15. The deal applies only to approximately 24,000 taxpayers who received a notice from the Department of Revenue and who have already been billed by the department for outstanding tax liabilities. The program applies to taxpayers not eligible for the 2014 amnesty (which brought in $57 million), including those who pay corporate excise taxes , estate taxes, fiduciary income taxes and individual use tax on motor vehicles. Assessed penalties are waived.

Maryland is moving ahead with an amnesty for non-payers of a wide range of taxes —including income, sales, use, withholding, admissions and amusement—for liabilities due as of Dec. 31, 2014. Under the law, signed April 14 by Republican Gov. Larry Hogan, penalties will be waived and interest halved.

Arizona has approved a two-month amnesty, starting Sept. 1, that applies to all taxes collected by the Department of Revenue, except withholding and luxury taxes. The amnesty includes any tax period before Jan. 1, 2014 for annual filers and Feb. 1, 2015 for all others. Both penalties and interest will be waived, but participants must give up the right to protest or launch judicial proceedings.

Missouri is offering what Democratic Gov. Jay Nixon said is a one-time opportunity to pay all back taxes  without having to pay any additional interest, penalties or fees during a 90-day window that starts Sept. 1. Taxpayers who take advantage of the amnesty have to sign an agreement that requires them to comply with all state tax laws for eight years.

Several other states are considering versions of tax amnesties, including South Carolina, Kansas, Indiana and New Hampshire. While the time periods and affected taxpayers differ, each of those states’ proposals would provide waivers of both penalties and interest.

It’s hardly a novel idea. Since 1982, 46 states and the District of Columbia have offered at least one tax amnesty, according to the Federation of Tax Administrators, a group based in Washington, D.C., that provides expertise and advocacy for state tax administrators. But the programs are only of limited value, tax experts say.

”The amnesties are notorious for producing headline-grabbing revenues, but these are wildly inflated,” Ross said. “Much of these would be collected under normal procedures.”

And there’s always the risk that taxpayers will become complacent, calculating that they can skip filing and just wait for an amnesty.

“There have been studies that show, psychologically, that the willingness of a state to regularly or periodically enact an amnesty does trigger an expectation on the part of some taxpayers, but not all,” said tax attorney Gregory  Jenner, a partner with Stoel Rives in Washington, D.C. “Some people get sideways, then get themselves straight. It’s a trade-off the states have to acknowledge.”

If a state goes the amnesty route more than once, Jenner said, “you want to time them randomly so people don’t game the system.”

But tax lawyer Michael Fried said that for most people, the failure to pay taxes is not a game. “They do it because of real reasons—the economy, their job status, the cost of raising a family,” said Fried, a founding partner of Fried & Rosefelt in Bethesda, Maryland.  “People just fall behind and a solution pops up.”

One way to avoid encouraging serial delinquency is to limit the financial relief offered or the eligibility of repeat scofflaws. Massachusetts’ amnesty, for example, does not waive accrued interest, while Maryland’s program only cuts the interest in half. Indiana’s program would not allow people who participated in a previous amnesty to take advantage of the new one.

Republican state Rep. Todd Huston, the author of Indiana’s amnesty, said so much time has passed since the last one, in 2005, that taxpayers won’t think that amnesties are a regular occurrence.  “I don’t think it’s creating unintended consequences. It gives folks a chance to get settled and honest,” Huston said. He estimates the amnesty could bring in between $80 million and $120 million.

Louisiana, meanwhile, continues to collect a tidy sum from delinquent taxpayers despite having hosted a series of tax amnesties going back to 1985. It is currently in the third year of its latest amnesty program. The state took in about $450 million in 2013, Coniglio said, and $169 million last year. He cautioned, however, that the bulk of the money came not from scofflaws, but from taxpayers (many of them businesses) that were in dispute with the state over taxes and used the amnesty to settle their cases.

Coniglio acknowledged that the current amnesty might be the last one for a while. “I think we are having a little amnesty fatigue,” he said.

If the carrot of an amnesty doesn’t bring enough non-payers back into the system, states can use a stick and publish the names of tax scofflaws, or refuse to renew their driver’s licenses or business licenses. In Louisiana, Coniglio said, the threat of losing hunting or fishing licenses is especially powerful.

But in Louisiana and other states with budget holes to close, “of course, they prefer money,” Fried said.