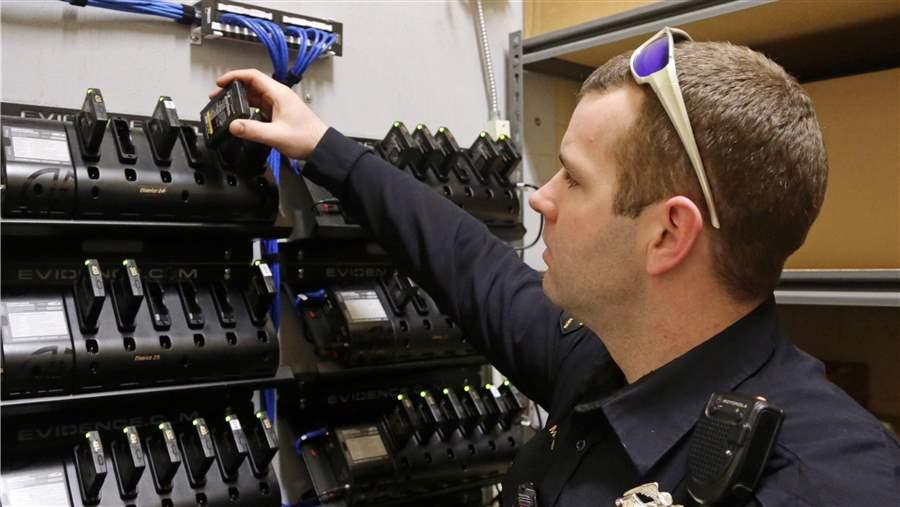 Officer Dan Merseth demonstrates the docking procedure for police body cameras at police headquarters in Duluth, Minnesota. The department received 84 cameras and charging bays for less than $5,000, but a three-year agreement for data storage costs about $78,000. (AP)

As the nationwide push intensifies for police to wear body cameras, states and cities have encountered one consistent roadblock to adopting the technology: the cost.

The price of a single camera ranges widely, from less than $100 to more than $1,000, based on the size of the purchase (larger police departments often get a discount) and whether the deal includes data storage services. But managing and storing the video costs many times the price of the cameras themselves. And because the technology is so new, it’s likely that it will have to be replaced fairly quickly, which would require additional expenditures.

In a survey of 40 police departments by the Police Executive Research Forum conducted last fall and released this year, nearly 40 percent of departments without body cameras cited cost as the primary barrier to using them.

President Barack Obama has called for $75 million in new federal spending to help pay for 50,000 police body cameras for local police departments. States are struggling with whether cameras should be worn all the time and whether the video should be a public record, which also can affect costs. As of April 20, 34 states were considering 117 bills related to police body cameras, according to the National Conference of State Legislatures (NCSL). So far, only a handful of states have figured out how to pay for them.

“They (cameras) can be a really great tool if implemented correctly,” said Lindsay Miller, a senior research associate at the police forum, a membership organization of police and government officials, academics and others who work in the field. “It’s not as easy as sticking a camera on an officer and sending them out in the field.”

Put simply, Miller said, “The money has to come from somewhere.”

In New Jersey, legislation enacted last fall requires officers or the vehicles they routinely use in traffic stops to have cameras, either on the officer or on the dashboard in the car.

Giving local governments the option — body camera or dashboard camera — was a compromise to help pass the bill, said Democratic Assemblyman Paul Moriarty, who sponsored the legislation. The measure only applies to newly acquired vehicles, and it exempts officers who work in administrative roles or detectives who don’t regularly conduct traffic stops.

The most significant part of the compromise, however, is the funding mechanism: The legislation levies a $25 surcharge on convicted drunken drivers, a fine that stays in the municipality where the offense occurred. That funding can go toward purchasing cameras or data storage and other expenses that make having police cameras “workable,” Moriarty said.

“We have a problem here with the state mandating something and not coming up with some way to pay for it,” he said. “Some of these larger cities, they’re strapped for cash — and some of the smaller ones too.”

Lawmakers in some other states are trying a more straightforward approach. They are calling for state money to help pay for a technology they see as a necessity, and one for which the public and local police departments are clamoring.

A measure advancing in Texas, for instance, would dedicate $50 million in state money to implement a requirement that officers across the state wear cameras. Several body camera bills have gained bipartisan support in Austin; one already has cleared the Senate, and Republican Gov. Greg Abbott has signaled his support for body camera legislation this session.

Democratic Rep. Ron Reynolds, who is pushing the $50 million measure, said finding the money to support body camera requirements was just as important as the requirement itself.

Reynolds admits his bill could change as the session winds toward its June adjournment, but he is optimistic the state will provide at least some money to pay for body cameras.

“Worst case scenario we’re going to have limited funding where we can establish good practices and some good pilots,” Reynolds said. “Texas is going to be probably the first state with a full comprehensive body camera bill, and that’s going to send big shockwaves across the country because we’re known as a fairly conservative state, a red state, and we’re going to take the lead.”

Some lawmakers in South Carolina, particularly the South Carolina Legislative Black Caucus, want the state to spend as much as $21.5 million for police body cameras in the wake of the Walter Scott shooting. Scott, an African-American, was shot in the back and killed by a white police officer as he ran away in North Charleston, South Carolina, on April 4. The shooting was captured on a cellphone video by a bystander.

The Police Executive Research Forum survey found most agencies spent between $800 and $1,200 per camera to purchase them, a daunting price tag for departments already strapped for cash.

But it is the ongoing costs that are the real challenge. The New Orleans Police Department plans to purchase 350 body cameras, but is budgeting $1.2 million over five years, mostly for data storage.  Other departments, the police forum found, expect to spend $2 million for a few years of data storage.

In Iowa, the Des Moines Police Department is looking for $300,000 just to start a body camera program. Duluth, Minnesota’s initial $5,000 purchase of 84 cameras ballooned to about $78,000 for licensing and data storage. Last year, Duluth’s police budget was $19.1 million, while Des Moines spent more than $59 million on its police force.

Many states are debating the issues that surround police cameras without tackling the funding question, said Richard Williams, a criminal justice policy specialist with the NCSL. In many instances, he said, lawmakers are focused how long departments should have to keep video, and if or when recordings should be made public.

Miller, with the Police Executive Research Forum, said those issues are important, but that for police departments, cost is the overriding concern.

Officers could potentially record millions of videos a year, any number of which could be used as part of a criminal proceeding, a public records request or for another official purpose. The cost of downloading, logging, handling and storing all that video can be staggering.

“Most of the agencies that we worked with say the biggest issue is the backend data storage,” she said. “It can cost hundreds of thousands of dollars to store video each year.”

Costs were a stumbling block in Utah this year, where state lawmakers debated but didn’t pass body camera legislation. Meanwhile, some departments around the state are using the technology — and trying to meet the costs associated with it.

In Clearfield, Utah, a city of about 30,000 located 30 miles north of Salt Lake City, the police department has been using body cameras since 2010. But recently, data storage problems came to a head, and for a few weeks, the department was forced to use DVDs to store video because it ran out of computer server space.

“The more you use them, the more storage it takes, and the costs increase,” said Mike Stenquist, an assistant chief. “The public wants more, it also costs more. It creates a lot of problems.”

It’s not likely to get any better either, Stenquist said. Years ago, the department used older model cameras that needed to be recharged frequently and could only record two hours of video at a time, meaning officers had to return to the office frequently to download any recordings.

New models last longer and have greater storage capacity, he said. But now there’s another problem: The newer cameras record high-definition video, which means the video files are much larger, a reality that contributed to the department’s recent data crunch.

“The data just builds up,” Stenquist said. “Now that we have better cameras that record through a whole shift, it’s taking three or four times the data storage.”

Between cost concerns and public access questions, Stenquist said, it’s probably inevitable that state lawmakers will have to step in.

“It’s just become pretty muddy about what’s going to happen in the future,” he said. “There’s a lot of work to be done.”