Kyle Ueyama, an associate at The Pew Charitable Trusts, researches and analyzes the administration of elections.

The way Americans vote is changing, with more and more of them receiving and casting their ballots by mail.

The U.S. Census Bureau estimates that 10 percent of all ballots cast in the 2000 presidential election were cast by mail. By 2012, the practice had nearly doubled, to 19 percent of voters. In last year’s midterms, data from the Survey of the Performance of American Elections (SPAE) found that around a quarter of all voters voted by mail.

But not all voters who receive their ballots in the mail return them that way. The SPAE estimates that in 2014 around 1 out of every 5 mail ballots nationwide were returned by hand to an official location, like an election office, drop box, or polling place on Election Day, and not mailed back to the election official.

In Colorado, Oregon, and Washington, ballots are sent by mail to all active registered voters. In Colorado, in counties with 25,000 or more registered voters, 67 percent of those who used mail ballots dropped them off.  For example, in Denver County, Colorado, slightly more than 70 percent of mail ballots in the last midterm election were returned by hand to an official drop-off location, many at one of the nearly two dozen 24-hour drop boxes that were available. 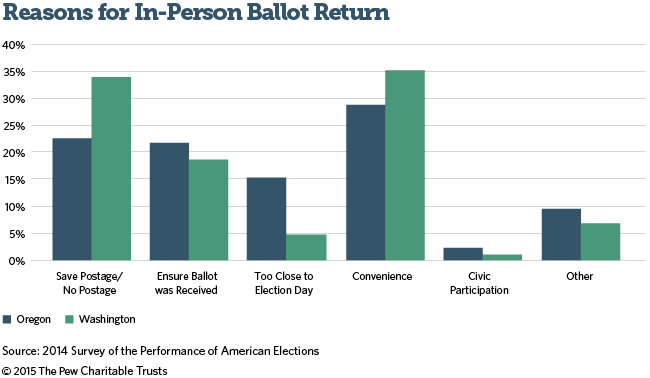 The Importance of Drop Boxes

A report for the Colorado Voter Access and Modernized Elections Commission found that one of the reasons for the variation between counties is the state currently requires the 24-hour drop boxes be under camera surveillance. This can be cost prohibitive for some the counties, and especially for the small and medium-sized jurisdictions.

Data from the SPAE shows a parallel trend in the two other states that hold all-mail elections, where 56 percent of voters in Oregon and 39 percent of participants in Washington decided to return their ballot in person.

In Pierce County, Washington, the second most populous county in the state, nearly 54 percent of the approximately 220,000 ballots cast were returned at a drop box.  The county uses a Geographic Information System (GIS) to determine the best locations that will serve the most voters, allowing for a maximum drive time of 10 minutes. These locations are often in common public spaces, including city halls, libraries, and fire stations. The county uses large boxes that weigh 600 pounds and can hold 1,500 ballots.

A majority of voters in Arizona and California also used mail ballots in the 2014 midterm election. These states allow eligible voters to register as a permanent absentee voter and have their ballot automatically sent to them in every election. More voters in these states mailed their ballots back, likely in part because drop boxes are not widely used in either state.

So why don’t voters just drop their ballots in the mail?

In Oregon and Washington, the SPAE asked voters why they chose to hand deliver their ballots and several reasons were cited.

Convenience was the most common reason. Drop-off sites were prevalent in both states, especially in urban areas – King County, home to Seattle, had 22 locations while Multnomah County, which contains the bulk of the city of Portland, had 28. Washington mandates that each county have at least two locations where voters may return their ballot; Oregon requires that a county provide one drop off location for every 30,000 registered voters, with a minimum of two sites in a county.

A desire to save the cost of postage was the second most popular reason respondents gave in both Oregon and Washington. It appears that such concerns have not gone unnoticed. Earlier this year, the Washington Senate held a committee hearing that considered a bill which would have required ballot return envelopes to come with prepaid postage.

Fifteen percent of voters in Oregon who hand delivered their ballot said they did so because it was too close to the day of the election to return their ballot by mail, compared to only 5 percent of respondents in Washington. In Oregon, ballots must be received, either in person or by mail, by 8 p.m. on Election Day. The Secretary of State’s office recommends that voters who return their ballots less than a week before Election Day use a drop box to ensure their votes are counted. Washington only requires that a ballot returned by mail be postmarked, and not necessarily received, no later than the day of the election.

The use of mail ballots is growing steadily, and the trend is likely to continue in the 2016 election cycle. However, as seen in states that rely on vote by mail, “mail voting” more aptly describes how voters receive their ballots, not how they return them.