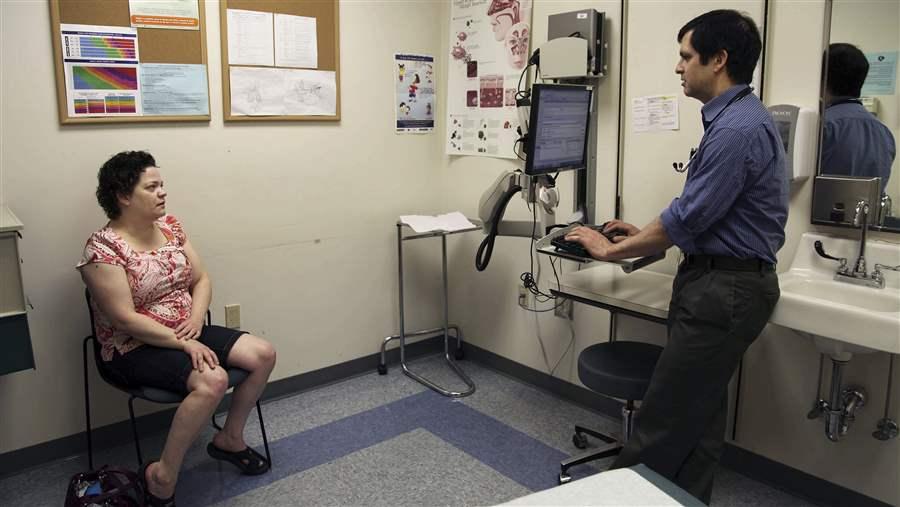 A doctor speaks to a patient at a clinic run by the Virginia Garcia Memorial Health Center in Beaverton, Oregon. Oregon is one of eight states that have reaped financial benefits from expanding Medicaid under the Affordable Care Act. (AP)

Medicaid expansion has given a budget boost to participating states, mostly by allowing them to use federal money instead of state dollars to care for pregnant women, inmates, and people with mental illness, disabilities, HIV/AIDS, and breast and cervical cancer, according to two new reports.

States that levy assessments and fees on health care providers, which have collected higher revenues as a result of expansion, have reaped extra benefits.

Under the Affordable Care Act, states can choose to expand Medicaid, the joint state-federal health program for the poor, to adults with incomes up to 138 percent of the federal poverty level ($16,242 for an individual). The federal government is paying the entire bill for the new Medicaid beneficiaries through 2016, a declining share over the following three years, and 90 percent thereafter.

Twenty-nine states and the District of Columbia have opted to expand. One argument against expanding Medicaid is that doing so will put a strain on state budgets, either now or in the future.  But the two reports, one commissioned by the Robert Wood Johnson Foundation (RWJ) and the other by the Kaiser Family Foundation (KFF), suggest the opposite.

The RWJ report examined eight Medicaid expansion states: Arkansas, Colorado, Kentucky, Michigan, New Mexico, Oregon, Washington and West Virginia. It found that those states, selected for their regional and demographic diversity, will save (or collect) a total of $1.8 billion through Medicaid expansion by the end of 2015.

“I don’t know any other way of describing it except as a win-win for us,” said Audrey Tayse Haynes, secretary of the Kentucky Cabinet for Health and Family Services, which expects to have saved nearly $109 million by July 1.

The KFF analysis, which looked at Connecticut, New Mexico and Washington state, concluded that those states have experienced “state savings and revenue gains with limited costs resulting from expansion, even as some potential fiscal gains have not yet been tracked.”

Historically, many states have used their own money to pay for programs and services for people without insurance. In expansion states, many of those uninsured now are getting coverage through Medicaid, which means the federal government is paying for their care. The states that were the most generous to the uninsured before expansion are garnering the biggest benefits now.

“You can say states that had more significant programs for the uninsured before expansion are indeed going to see the most significant savings” in certain budgetary areas, said Patricia Boozang, one of the coauthors of the RWJ study. Boozang is senior managing director of Manatt Health Solutions, which prepared the report for RWJ.

A number of the states have found mental health services to be a particularly fruitful area for savings.

Michigan is a case in point. Prior to Medicaid expansion, the state spent tens of millions of dollars each year on community mental health services for those who did not qualify for Medicaid and did not have health insurance. Farah Hanley, deputy director for central operations for the Michigan Department of Health and Human Services, said that so many of those served by such programs became eligible for Medicaid after expansion that the state was able to cut funding to them by about two-thirds. In fiscal year 2015, the state expects to reap $190 million in savings.

Similarly, Kentucky expects to have saved $30 million in mental health spending by July 1.

States also have saved money on care for pregnant women. Prior to expansion, many states did not extend Medicaid coverage to poor, young adult women until they became pregnant. At that point, states and the federal government shared the cost of their care, based on a “matching” formula that varies from state to state. Now women who qualify for the expanded Medicaid program are receiving care wholly funded by the federal government, both before and after they become pregnant.

For Washington state that has meant savings of more than $38 million, while Arkansas has saved $24.5 million.

Inmates and the ‘Medically Needy’

Expansion states also have saved money on health care for prison inmates, according to the two reports. States are responsible for providing health care to inmates when they receive care inside the prison walls. However, if an inmate needs in-patient hospital care outside prison and is eligible for Medicaid, the federal government contributes based on the matching formula.

In states that have expanded Medicaid, hundreds of thousands of inmates who didn’t qualify for Medicaid before are now eligible. When those inmates receive care outside prison, the federal government pays for it.

That change is projected to save Michigan $19 million. Kentucky will save more than $16 million, Colorado $10 million, and Washington state $2.1 million.

Before expansion, some states extended Medicaid coverage to those considered “medically needy” because of certain medical conditions, such as HIV/AIDS and cervical or breast cancer. Now, many of those people are part of the expansion population, so the federal government will pay for their care.

The medically needy category has produced savings of $8 million in Arkansas, $16 million in Kentucky, and $46.5 million in Washington.

Medical services for the disabled also produced significant savings: Arkansas will save more than $11 million and Kentucky $9.6 million on health care for disabled individuals.

While all eight states in the RWJ study saved money, some also increased revenue as a result of expansion. For example, Michigan imposes a 1 percent tax on health insurance claims, including those filed with its Medicaid managed care plans. Expansion added 320,000 people to the state’s Medicaid rolls. As a result, Michigan expects a yearly gain in revenue from the health insurance assessment fee of $26 million. Similarly, Arkansas and New Mexico are each seeing a $30 million yearly increase, and Washington state $34 million.

While grateful for the savings, Kentucky’s Haynes said the most important benefit of expansion for her state has been extending health care coverage to thousands of Kentuckians who used to have none.

“I got a letter on Saturday from somebody I know whose 60-year old brother had passed away,” Haynes said. “The brother hadn’t had insurance for some time before, and she wrote, ‘You have no idea how important the Affordable Care Act was to our family. Paying his hospital bill would have bankrupted all of us.’”