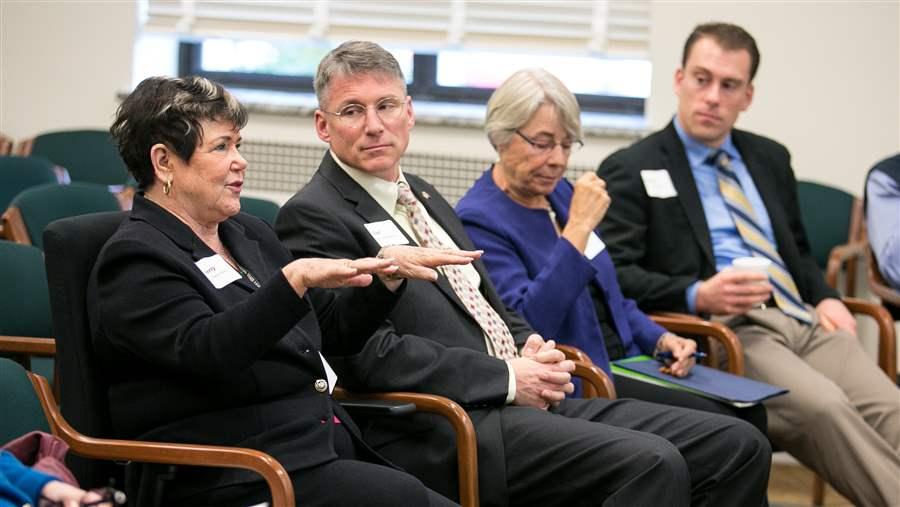 Soon after then-Rep. Gabrielle “Gabby” Giffords, D-Ariz., was shot and seriously wounded by a gunman in Tucson in 2011, officials at the University of Arizona wanted to do something to honor her.

As Giffords was known for her bipartisanship in an often rancorous U.S. Congress, the university decided to create the nonprofit, nonpartisan National Institute for Civil Discourse. Chaired by former Presidents George H.W. Bush and Bill Clinton, it aims to advance and promote civil discourse among elected officials, the media and the public. Giffords now serves on the board.

In 2012, Ted Celeste, then a Democratic state representative from Ohio, came to the institute with a plan. He was concerned about what he called the “hyper-partisanship” that was plaguing state legislatures and wanted to hold workshops for legislators in both parties to improve relationships across the aisle.

That ultimately resulted in the creation of the Next Generation program, which is targeted at state lawmakers. Its goal is to help build trust and cultivate a culture in which public policy is developed through discourse and collaboration.

Stateline spoke recently with Celeste, the institute’s director of state programs. He helped launch and now runs the Next Generation program.

Why is it called “Next Generation?”

The idea is that 50 percent of our national elected leaders came from statehouses. So why don’t we try to develop a different mindset and cultural change before they get to Washington, so they’ll be in a much better position to work together?

What are the goals of Next Generation?

The idea is you want them to end up walking out of there thinking about what’s next. What do they want to accomplish? How do they get other people involved? What can we change? How can we have more opportunities for socializing?

Some of them have started to do things like having a Republican and Democrat go to each other’s districts and hold a meeting with constituents or a town hall meeting. In some states, they want to match up Democrats and Republicans and have them ride together in a bus on their annual tour of the state. They already do that in Maine.

We would hope that the level of dysfunction would decrease so that both sides would be working better together.

First, it needs to be done by legislators for legislators, in a safe place, where folks feel comfortable. There’s time for introductions, and a meal is always part of it, sharing food together. The workshop is half a day. We try to do it at a time when legislators are in session or close to being in session.

We do an exercise that many people say has the most impact. It’s called “political journey.” We ask each participant to think about the event in their life that most profoundly impacted who they are politically today.  It’s the whole idea of storytelling. People don’t spend enough time thinking about that – where did I come from and what about the person sitting across from me? They’re too busy thinking about the day ahead and policy issues.

When we were doing a facilitator training in Washington, D.C., we had a legislator in his 20s, a young Republican from Maine. He told his story about how he was impacted by 9/11. The next person to talk was an old-time Democrat from Washington state who said that he was impacted in the ‘60s by (President John F.) Kennedy’s funeral. And he said, “Frankly, I’m looking out at Pennsylvania Avenue and I can still hear those drums.” It was really powerful. The young legislator looked at him and said, “That was history to me until now. Now, it’s personal.” It made a difference on how they viewed each other.

How many legislators have participated?

We’ve had 210 legislators who have participated in the workshops. We’ve had 12 workshops in nine states: Ohio, Nebraska, Pennsylvania, Washington, Massachusetts, Vermont, Colorado, Minnesota and Maine.

Why is hyper-partisanship growing at the state level?

There are several reasons. One is that redistricting has led to most elections being decided in primaries. People who represent the farthest end of their political persuasion end up in the legislature. It’s harder for them to find common ground. Also, there are fewer opportunities for social interaction. Folks are not spending time together like they used to in the good old days, when you used to go out for a drink. In many states you’d be in trouble with your party leadership if you did that.

And when there is a change in power…if the majority had not acted kindly to the minority before the change, it’s likely the same thing will happen with the flip. “You did it to us. We’ll do it to you.” That’s often what happens.

How does hyper-partisan politics hurt the functioning of state legislatures?

What happens is the minority ends up not fully participating. Also, good ideas go unused because they’re never able to be offered or considered in some states. And you don’t have any collegiality of working across the aisle when things are so nasty.

How does all this translate to the nation’s capital?

Some of the people who participate are millennials. They’re going to be the new crowd coming to Washington. These are folks who want to find ways to work together. One hope is that they’ll be more likely to do things differently as a result of these workshops. Hopefully, we’re building a cadre of people who can rely on each other as they focus on the next steps.