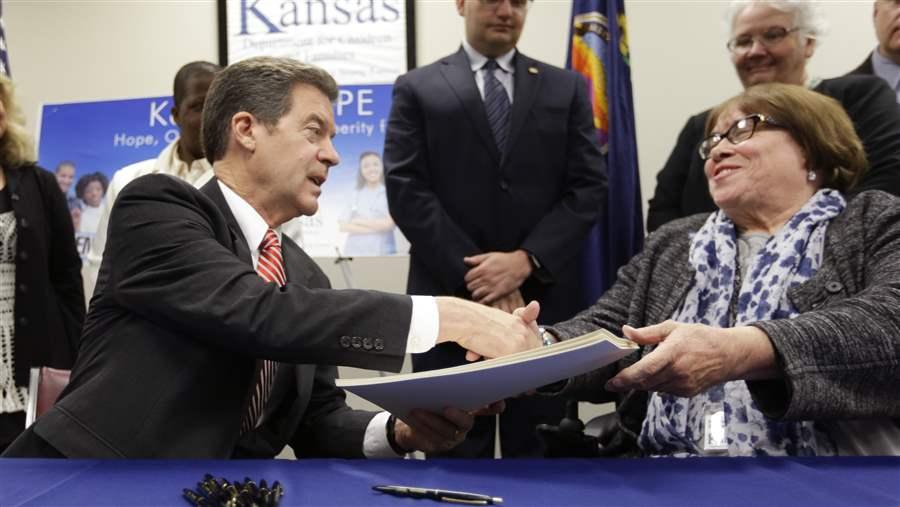 Kansas’ new law that restricts welfare recipients from using their benefits to get a tattoo, consult a psychic or take a cruise has made for endless fodder on the late-night talk show circuit.

Supporters argue the law will push the poor to obtain gainful employment, and 18 other states are weighing comparable measures. But welfare policy analysts from across the ideological spectrum question the wisdom of the restrictions.

Analysts say the Kansas law, the nation’s most restrictive, saddles welfare recipients with extra bank fees because it limits ATM withdrawals to $25; prohibits a state agency from using state or federal funds to educate needy families about food stamp eligibility; and makes it more difficult for the poor to pay their rent or buy cheaper gasoline in neighboring Missouri.

Groups such as the left-leaning Center on Budget and Policy Priorities (CBPP) have sharply criticized the Kansas law. Liz Schott, a senior fellow at CBPP, said the law stigmatizes welfare recipients by creating the impression that they are gaming the system.

Rachel Sheffield, a policy analyst at the conservative Heritage Foundation, also questioned the effectiveness of Kansas’ strategy. Sheffield said there is no evidence of widespread fraud involving Electronic Benefit Transfer (EBT) cards, which function like debit cards. Passing laws restricting the use of benefits is easier than crafting truly effective policy, she said.

“There are stories that will come out about individuals spending their dollars on casinos, and people get riled up about those things, which is understandable. So you have policymakers putting forth these kinds of laws,” Sheffield said. “But this doesn’t get to the heart of what is needed for reform.”

From Welfare to Work?

The Kansas law codifies policies that the Kansas Department for Children and Family Services has had in place since 2011, said Theresa Freed, the department’s director of communications. Some of the law’s more controversial components, such as the $25 ATM limit, were the result of amendments introduced by lawmakers, she said.

The law also bans the use of EBT cards to pay for a wide variety of items and services, from alcohol to amusement parks, massage parlors, concerts and sporting events.

“The law is really about encouraging individuals to become employed. We believe that employment is the most effective path out of poverty,” Freed said.

Between 2013 and 2014, she said, more than 6,000 welfare recipients In Kansas obtained employment. Some of those people now earn enough that they no longer qualify for aid, while others still need some assistance.

“The policies that we’ve enacted have been effective in helping individuals getting back to work,” Freed said.

But state Sen. Anthony Hensley, a Democrat from Topeka, said the law is an “overreach.”

“It harkens to the days of President Ronald Reagan where he talks about the welfare queen that drove a Cadillac,” Hensley said. “The idea of, ‘Let’s crack down on the welfare cheats.’ It’s a political game.”

Kansas is not the first state to pass legislation restricting EBT cards distributed through the Temporary Assistance to Needy Families (TANF) program. At least 23 states have laws on the books restricting or limiting the use of EBT cards, according to the National Conference of State Legislatures (NCSL).

The Louisiana law bars recipients from spending benefit money in tattoo parlors, on psychics, bail bond companies, amusement parks, arcades, jewelry stores, nail salons, cruise ships or any establishment in which children younger than 18 are not admitted. TANF benefits cannot be used for the purchase of tobacco, alcohol, lottery tickets, or jewelry.

The punishment for violating Louisiana’s rules is harsh, CBPP’s Schott said. A recipient loses benefits for a year for a first violation. A third offense carries permanent disqualification from getting assistance.

No other state caps daily ATM use. According to Cotsoradis, the $25 limit creates problems for poor families, who usually pay their rent and other bills in cash. In addition, families failing to meet one requirement of the TANF law would be at risk for losing other social safety net benefits, such as child care assistance or food stamps, she said.

Kansas also caps the amount of time a family can spend on welfare. Thanks to welfare reform enacted in 1996 during the Clinton administration, federal law prohibits families from receiving more than 60 months of welfare payments. The Kansas law Gov. Brownback recently signed stops benefits at 36 months.

The new time limit is the most troubling aspect of the new law, Cotsoradis said. Families living on the edge of poverty tend to cycle in and out of welfare dependency, she said. A parent might get laid off from a job or have reduced work hours in the midst of a recession, or a family member might have a medical emergency. Often, they are not eligible for unemployment insurance. Public assistance helps them get back on their feet quickly, Cotsoradis said.

Based on preliminary numbers from the Department of Children and Family Services, when the law takes effect July 1, 1,012 recipients will lose their benefits because they will have exceeded the time limit.

“This is the piece of the legislation that will have the most immediate and significant impact on families with children,” Cotsoradis said.

Laws restricting the amount of time a family spends on welfare aren’t effective, according to the Heritage Foundation’s Sheffield. “Relatively few people leave the (welfare) rolls because of a time limit,” she said. Instead, states should focus on enforcing work requirements for able-bodied adults. “That’s really what we see as most effective.”

Poverty remains an intractable problem in the U.S., the CBPP’s Schott said, but fewer families are actually receiving benefits.  Those that do receive aid are finding that it doesn’t go far enough to meet their needs, she said.

According to the CBPP, TANF benefits have not kept pace with inflation. In addition, states are spending less TANF money on needy families, according to a CBPP report released earlier this month. (The federal government administers TANF money to states in the form of block grants.) In the 1990s, 70 percent of combined federal and state TANF funds went to basic assistance for poor families. By 2013, 28 percent of those funds went to needy families, the report found. Instead, states have spent a growing share on other areas, such as programs to encourage marriage and discourage out of wedlock births. Sometimes the money is spent on child welfare programs as well.

To qualify for welfare in Kansas, as well as most states, a family has to be living in deep poverty, according to Heather Hahn, a senior fellow at the Urban Institute. The maximum amount a family of three in Kansas can receive in benefits is $429 a month; most receive much less, Hahn said. Twenty-six percent of poor families in the state receive cash assistance, she said. Adult family members are required to be either working or engaged in “work activities” to receive the benefits unless a parent is caring for a newborn infant or a disabled family member.

“We want to create solutions, but the solutions are based on a myth and they don’t solve the real problem,” Hahn said. “It’s diverting attention from the real problem: Working full-time minimum wage isn’t enough to support a family. People who are trying to play by the rules, who are working and spending their money as wisely as they can, can’t make ends meet without some assistance.”