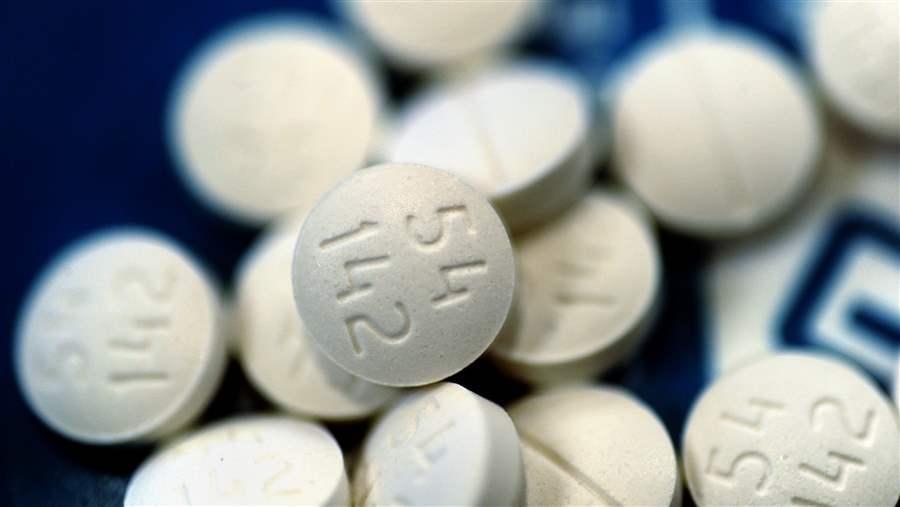 The federal government has been issuing warnings about the dangers of methadone for nearly a decade. Two years ago, states started removing it from their Medicaid “preferred drug lists.” (Joe Amon/Getty Images)

As prescription drug overdose deaths soar nationwide, most states have failed to take a simple step that would make it harder for doctors to prescribe the deadliest of all narcotics.

Methadone overdoses kill about 5,000 people every year, six times as many as in the late 1990s, when it was prescribed almost exclusively for use in hospitals and addiction clinics where it is tightly controlled. It is four times as likely to cause an overdose death as oxycodone, and more than twice as likely as morphine. In addition, experts say it is the most addictive of all opiates.

Yet as many as 33 states make it easy for doctors to prescribe the pain medicine to Medicaid patients, no questions asked.

In those states, methadone is listed as a “preferred drug,” meaning Medicaid will cover its costs without any red tape.  If a drug is not on a preferred list, doctors must explain why they are prescribing it before the prescription can be filled and paid for by Medicaid.

“We’ve given so much attention to oxycodone and heroin, I fear we are overlooking what is possibly an even more dangerous drug,” said Democratic state Del. Don Perdue of West Virginia, a pharmacist who has made curbing opiate drug abuse his top priority.

Best known as a medication to help fight addiction, methadone represents only 2 percent of all opiate painkillers prescribed in the U.S. But it is involved in one out of every three accidental overdose deaths, according to data gathered by the U.S. Centers for Disease Control and Prevention (CDC).

Unlike other narcotic pain medications, methadone depresses heart and lung activity long after its pain relief has stopped. Pain relief lasts four to eight hours, while potentially harmful respiratory depression can last up to 59 hours, according to the U.S. Food and Drug Administration (FDA).

Because the drug’s effects are unpredictable, it should only be prescribed by experienced doctors, and only for patients who have tried other opiate pain drugs.

Pain specialists agree methadone is safe and effective when prescribed by an experienced physician. It also has been safely used to treat heroin addiction in the U.S. since the early 1950s. Millions of addicts have held down jobs and lived for decades while receiving daily doses of the synthetic opiate.

But in the hands of an inexperienced doctor, or an unattended patient who might reach for it too often to quiet severe pain, it can be deadly. Because methadone stays in a person’s system long after the pain returns, users may take another dose before it's safe to do so. For illicit drug users attempting to get high, it can be a death pill.

It is not known how many people die from accidentally taking too much of their own methadone prescriptions, and how many die from using the prescription drug illicitly or misusing take-home doses from addiction clinics. National statistics are drawn from death certificates that use toxicology reports to determine whether methadone was the cause of death, either by itself or in combination with other drugs and alcohol.

No data are available on whether overdose deaths or even prescriptions have declined in states that have taken methadone off their preferred lists. The assumption is that requiring doctors to justify methadone’s use would ensure that prescriptions covered by Medicaid would be written for appropriate reasons and at safe dosing levels. The added hurdle does not ensure the drugs will be used correctly or only by the patient.

Nationwide, the number of methadone related deaths has leveled out, Paulozzi said, but it’s still a problem. He urges states to examine their Medicaid drug lists to determine whether methadone should remain a preferred drug. 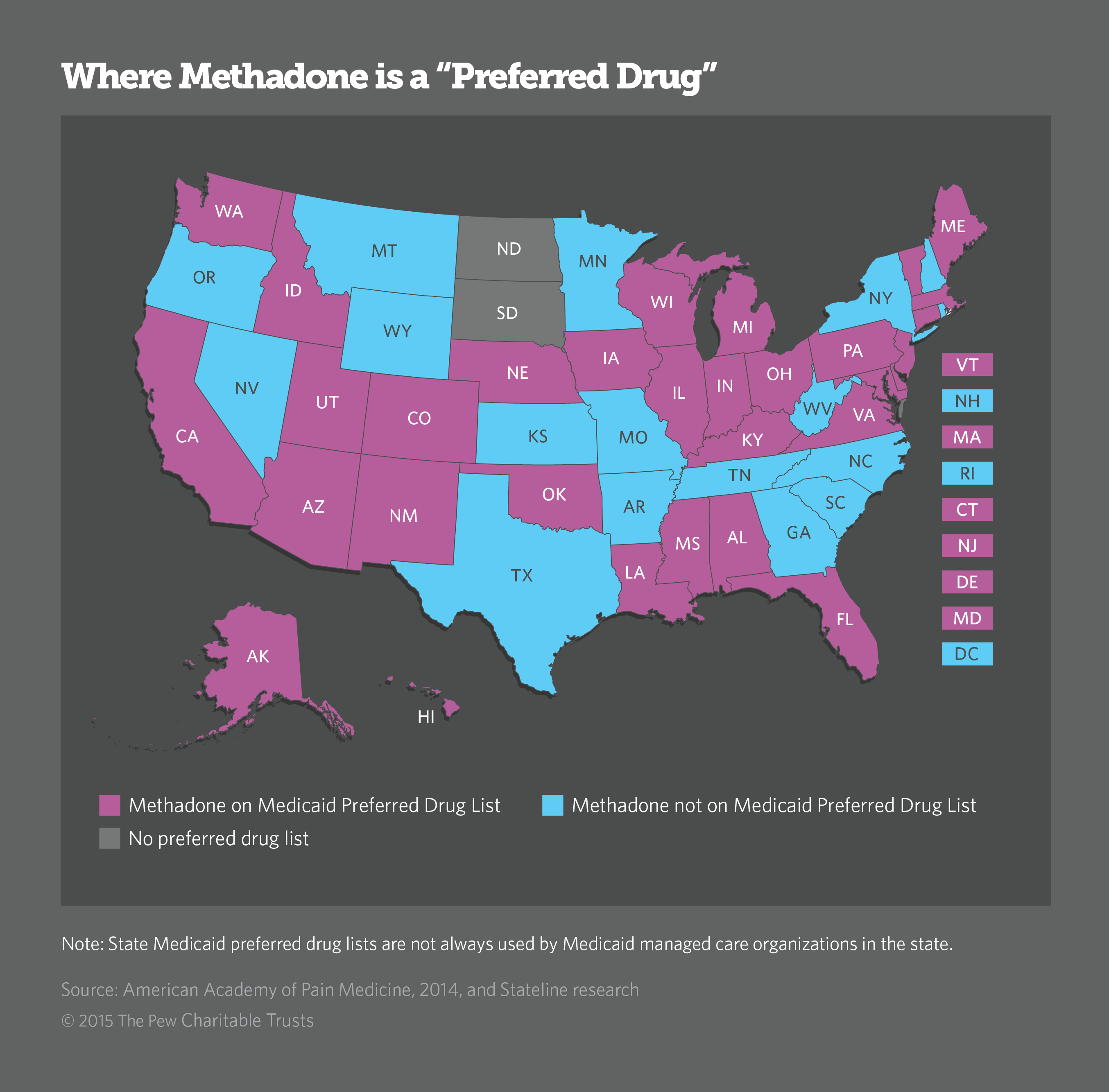 The American Academy of Pain Medicine recommends that all insurers remove methadone from preferred drug lists, cautioning that it “has unique pharmacologic properties that call for caution and expertise in administering it.”

The CDC warns that methadone should not be considered a drug of first choice for chronic pain and it should never be used for mild or acute pain or prescribed on an “as needed” basis.

The FDA issued a public advisory about the dangers of methadone in 2006, and later required a so-called “black box” warning on all labels and changed dosing intervals from 4 to 6 hours to 8 to 12 hours. In 2008, the U.S. Drug Enforcement Administration urged methadone makers to limit sales of the most potent form of the drug to hospitals and addiction clinics. And in 2009, the Government Accountability Office issued a report highlighting the mounting deaths from methadone prescribed for pain.

Why does methadone remain a preferred drug in most states?

According to Medicaid officials, the main reason is cost. In a 2014 policy statement, the Academy of Pain Medicine wrote: “Most states have designated methadone as a preferred analgesic, presumably because its low cost results in savings for publicly funded health plans.” Methadone is available in generic form and costs pennies per dose.

In 2013, North Carolina became the first state to remove methadone from its preferred drug list, according to research by the Academy of Pain Medicine.

The policy shift required a vote by an independent state Medicaid advisory group known as the pharmaceutical and therapeutic (or P&T) committee, made up of practicing doctors, nurses and pharmacists.  Methadone was not banned. It was simply limited to patients with chronic pain who had previously been treated with other opiate medications.

Once a year, P&T committees re-review all drugs on the preferred list for safety and efficacy and to determine whether they are still the cheapest among competing alternatives.  That’s when the dangers of methadone might be discussed.

West Virginia, which has the highest per-capita opiate death rate in the country, made the change with little fanfare. According to Medicaid’s chief pharmacist Vicki Cunningham, who attended the October 2014 P&T committee meeting, the vote was unanimous. As of Jan. 1, methadone became a non-preferred, long-acting analgesic for Medicaid patients in West Virginia. “It’s an unusual move,” Cunningham said. “I was pretty proud of it, truthfully.”

The physician who suggested the committee remove methadone from the preferred drug list, Charleston internist Dr. Bradley Henry, said he did it because he noticed a young resident with little experience had prescribed the drug. “I realized it was out there for anyone to use,” he said.

Henry agreed the move was unusual. Taking drugs off preferred lists is not what P&T committees do. “It’s not about taking things off the list,” he said.  “It’s 100 percent about putting things on.”

Even if it is too soon to say whether removing methadone from West Virginia’s preferred list will reduce the number overdose deaths, Becker of West Virginia’s Medicaid program said the newly instituted preauthorization process may have averted at least one casualty.

A primary care doctor requested authorization earlier this year to prescribe 60 milligrams of methadone per day for a patient with chronic pain who had not previously been treated with opiate pain medications. Becker said he called the doctor immediately to explain to him that starting with such a high dosage – double the recommended level for beginning pain therapy – could kill a patient who has not built up a tolerance for opiates.

Washington state, which has the third-highest methadone death rate in the country after Maine and Utah, decided not to take the pain medicine off its preferred list. The committee decided “it was not the drug’s problem, it was the prescribers’ problem,” said Dr. Charissa Fotinos, deputy chief medical officer for the Washington State Health Care Authority, which administers Medicaid.

Instead, the committee decided to write warning letters to the top 20 prescribers of the drug and visit their offices to educate them on the long-acting opiate’s tricky pharmacology. That was in December 2012, Fotinos said, shortly after The Seattle Times published an investigative report showing a disproportionate share of people who had died of accidental methadone overdoses in the state were low-income Medicaid beneficiaries.

Since then, the number of methadone overdose deaths has come down. In 2006, the peak year for methadone deaths in Washington state and the rest of the country, the drug was involved in 55 percent of all opiate related deaths in the state. Sixty-three percent of those were traced to a recent prescription for the drug as a pain medication. In 2013, methadone was involved in only 26 percent of all opiate deaths, and of those, only 38 percent were tied to a recent prescription, according to the Washington State Health Care Authority.

Washington state’s effort to educate methadone’s most frequent prescribers may be responsible for the decline in deaths. In response to Stateline’s inquiry, Fotinos said the P&T committee will consider whether to remove methadone form Medicaid’s preferred list at its next meeting scheduled for October 21.