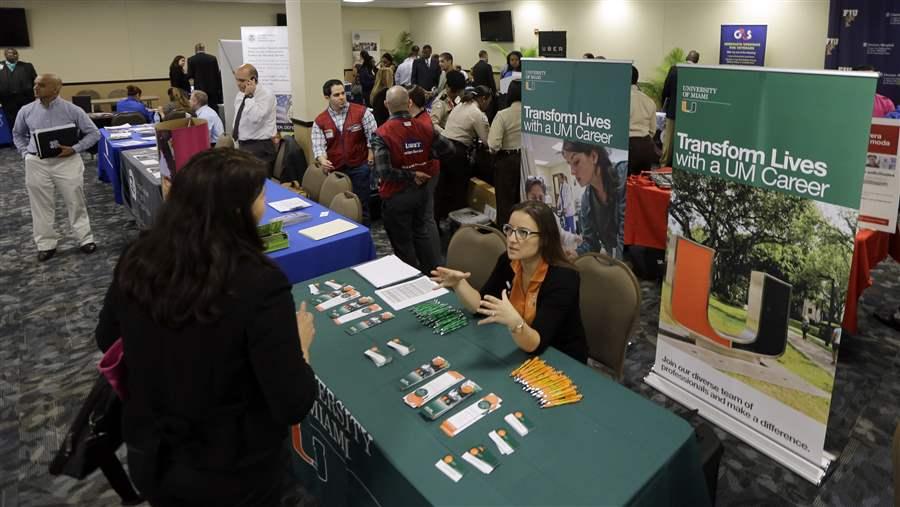 Tens of billions of dollars in debt. Cuts to jobless aid that have been called “historic and disturbing.” Unemployment insurance trust funds that are still clawing their way back to solvency.

This is the Great Recession’s legacy for the nation’s unemployment safety net. The sustained downturn and spike in joblessness stressed state programs to an extent not seen in decades, requiring emergency federal aid. Now, unemployment nationwide has fallen to 5.5 percent and the amount of unemployment benefits paid in the states has dropped to pre-recession norms in many cases. Federal jobless aid to extend benefits expired last year.

Yet many state unemployment insurance trust funds still face a deficit. Those that are in the black often have balances below pre-recession peaks. And many states are paying less in benefits. The result is a safety net significantly weaker than it was before the recession.

Six years after the end of the recession, many state officials and labor analysts are concerned about what will happen to jobless benefits once another economic downturn arrives.

“When it comes, the (unemployment) program is going to be weaker and less effective than it was in the last recession,” said Wayne Vroman, a senior fellow in the Center on Labor, Human Services and Population at the Urban Institute. “The consequences are going to be there in the next recession, and it will be obvious.”

State unemployment insurance trust funds are designed to be built up during good economic times to pay benefits to more people during bad times. Employers pay federal and state taxes finance the system.

But in many cases, the buildup during flush times doesn't happen, or not enough to cover a deep downturn. And in the last recession, states paid the price.

Even states with the strongest trust funds before the recession saw their balances plummet into the red. They were forced to turn to Washington for loans to pay benefits. As of the end of 2014, California, New York and Ohio each remained more than $1 billion in the red. California has by far the largest deficit, nearly $8.6 billion. Ten states still have negative trust fund balances, which together total $13 billion in debt.

See Stateline’s data visualization at the top of this story to see how individual state account balances performed.

Three-dozen states owed the federal government more than $47 billion at the borrowing’s peak in 2011. As of April 1, 10 of those states had a combined debt of $12.5 billion. Another $8 billion in debt is estimated to be owed by states to the private bond market, although exact figures for that debt are harder to pin down.

The return to a better financial footing has been a long process. It wasn’t until last year that the combined balance for all state trust funds returned to the black. Even then, the total was below the pre-recession peak: $16 billion at the end of last year compared to $41 billion in September 2007.

The big question for the states now is where to go from here.

States still in debt to the federal government face interest charges of about 2.3 percent per fiscal year as of last week (the federal stimulus bill waived interest charges through 2010). For those with the most debt, federal tax penalties on their employers have taken effect, meaning businesses have to pay more in taxes until the state repays its debt. Employers in seven states (California, Connecticut, Indiana, Kentucky, New York, North Carolina and Ohio) are subject to the penalties, which range from an additional 1.2 percent to 1.7 percent tax.

Concerned that employers might have to pay penalties, many states turned to the private market to pay off their federal debt. Michigan did. Its trust fund was $384 million in the red at the beginning of 2007, and fell nearly $3.9 billion in debt in 2011. The state turned to the private market for a loan, which it has said it expects to pay back by the end of the decade. Michigan’s trust fund was nearly $2.1 billion in the black at the end of last year, U.S. Treasury data show.

Michigan was among a group of states that took part in another debt-driven trend from the recession: reducing the number of weeks of benefits available to people who lost their jobs.

At least eight states currently offer fewer than 26 weeks of unemployment checks, which is the historical standard for the unemployment system that dates to the 1930s. North Carolina, for example, limited benefits to as few as 15 weeks. Few, if any, of those states have discussed reinstating longer-term benefits now that the economy has recovered. “The program is weaker right now,” the Urban Institute’s Vroman said.

Having depleted or debt-ridden trust funds has forced states to consider a variety of strategies for returning them to solvency. Some debated levying higher taxes if trust funds fell below a certain level, while others opted to raise taxes to shore up funds. Colorado, for example, enacted a surcharge in 2010 on employers who laid off more workers to try to cover a deficit of more than $500 million. The state later borrowed on the private market to repay its federal loan, lowering taxes for businesses in the process. The state’s trust fund was nearly $482 million in the black at the end of last year.

Economic considerations and the political climate affect the financial health of each state’s fund. Every state wants a fund robust enough to help the jobless until they can find other work. At the same time, states are wary of taxing employers too much for fear of discouraging employers from hiring more people, or driving them to another state where the tax burden isn’t as great.

California, for example, is one of two states (Arizona is the other) that levies its unemployment payroll tax only on the first $7,000 of wages paid per employee. Loree Levy, a spokeswoman for the state’s Employment Development Department, said that has hamstrung the state.

“We went into this last recession and the fund was not in a very strong balance situation,” she said. “You certainly do want to have a more healthy fund balance heading into the next recession. It’s just a matter of how quickly can that occur?”

Scott B. Sanders, executive director of the National Association of State Workforce Agencies, said states must strike a balance between the need for a sufficient trust fund and the burden unemployment taxes place on employers.

“The question is, 'What are the states that have these issues doing to prepare themselves going forward?’” Sanders said. “Are we and our states positioned to handle the next recession if it comes? I think it’s going to be a struggle for a lot of states.”