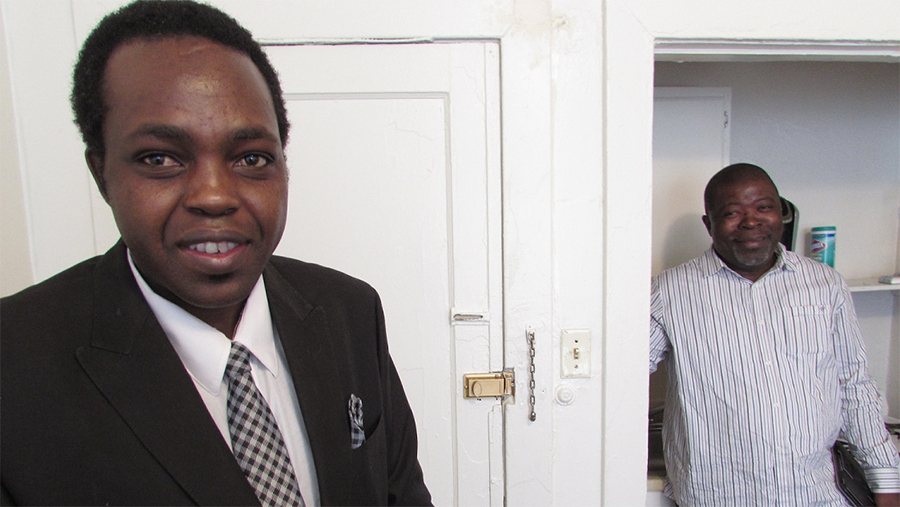 Warcheerah Kilima, left, and “rapid rehousing” coordinator Mosudi Idowu in Kilima’s Trenton apartment. Before getting the apartment, Kilima said he was sleeping in a train station while working nights as a mail sorter. (Tim Henderson/Stateline)

TRENTON, New Jersey—Two years ago Jenaie Scott had a $20 an hour cleaning job, which was plenty to cover the rent for a modest apartment on the west side of this state’s capital city.

But Scott lost the job in a 2013 downsizing, setting off a downward spiral that led her and 5-year-old son Jyaire into homelessness.

“I had other jobs, but they just didn’t pay enough, and eventually they put an eviction notice on my door,” Scott recalled. She and Jyaire moved in with relatives, then begged for space in the back room of a church and finally started sleeping in her car.

“I came here crying. I was so upset,” Scott said from the offices of Catholic Charities in Trenton, where she turned for help last year. With her strong history of work, she qualified for a local “rapid rehousing” program, which put her and her son in an apartment within a month.

The program paid her first month’s rent; Scott paid a share of the rent for the next two months and now is paying it all. She got a job at an Amazon warehouse, where she filled orders so fast her bosses made her a full-time coach for other workers. “Without this I don’t know where I’d be,” Scott said of the housing program.

The rapid rehousing strategy is based on the idea that in a majority of cases, a little temporary housing help can prevent people on the edge of homelessness from falling over it. It started with a few local experiments 30 years ago, worked well in pilot programs, and went national in 2009 as part of the federal economic stimulus package. Now used in every state, rapid rehousing is considered to be particularly effective for homeless families because it provides stability for children.

Mercer County (where Trenton is located) and other communities have found the program produces faster results than the previous strategy, which moved the homeless from shelters to transitional housing before giving them a permanent roof over their heads. And it costs less.

The number of homeless families has dropped by 75 percent to 71 families since 2007, before the program started, according to Marygrace Billek, Mercer County’s human services director.

Mercer County was able to lower the cost of getting a family into permanent housing from about $32,000 to $16,000 by skipping the intermediate step of transitional housing and moving people directly from homeless shelters to permanent housing. Families had been staying in transitional housing an average of 253 days. “We were actually managing homelessness, not trying to end homelessness,” Billek said.

Only about 6 percent of Mercer County families helped by the program have returned to homelessness, compared to 21 percent under the old program, she said.

One of the first to try the rapid rehousing concept was Minnesota’s Hennepin County, where shelters were filling up in the early 1990s. When every shelter cot and motel bed was taken, the county had no way to help new families.

By placing some families directly into apartments or houses, the county saw its need for homeless shelters drop by 70 percent and nobody was being turned away, according to a 2013 U.S. Interagency Council on Homelessness report.

Similar programs evolved in California and Pennsylvania. By 2008, the U.S. Department of Housing and Urban Development (HUD) had taken notice and launched a $25 million pilot demonstration project that included Mercer County and seven other communities in Louisiana, Michigan, Pennsylvania, Texas, Washington state and Wisconsin.

The strategy was expanded to 535 communities as part of the 2009 federal economic stimulus package and showed promising results, even as communities adapted the concept to meet their needs. More than 80 percent of rapid rehousing clients nationwide found permanent housing, according to a HUD report published in 2013.

By concentrating exclusively on rapid rehousing, Salt Lake City reduced its homeless population by 26 percent in one year.

“Rapid rehousing transitions people who are literally homeless into housing quickly. It directly decreases the overall number of homeless persons in shelters and on the streets," the HUD report said.

There are no nationwide numbers comparing rapid rehousing to other strategies for getting families off the streets, but HUD is conducting a study. A 2013 HUD interim report suggested rapid rehousing is more likely to be successful than other methods.

Last year, the U.S. Interagency Council on Homelessness listed rapid rehousing as one of its top methods for ending family homelessness, saying it could help make homelessness “a rare and brief occurrence” for families.

“You get families into housing quickly, and the kids don’t carry the stigma of ‘homeless’ into the classroom and into the playground,” Mangano said.

Although rapid rehousing and programs like it have been taking a bite out of homelessness, the problem is large and growing in many areas.

HUD does an annual count of the nation’s homeless population. According to a Stateline analysis of the federal numbers, homelessness dropped in most states between 2007 and 2014, but it has grown in 17 states and the District of Columbia.

(See Stateline’s map for the rate of homelessness in each state.)

In Trenton, Mosudi Idowu, the rapid rehousing coordinator for Catholic Charities, said he screens prospective applicants and does not accept people who face prison time, or who have addictions, or severe mental or physical health problems. There are other programs for them, he said.

Having a track record of steady employment is important for inclusion in the program, he said. About 75 percent of people who ask to be included qualify.

“You have to be ready, willing and able to work,” Mosudi said. “The old way was the program making decisions for people. That doesn’t work for everybody. People do better in rapid rehousing because they make their own decisions.”

Though families are an immediate focus of rapid rehousing, many single people also are helped. Warcheerah Kilima, 40, lost a home and family business, and suddenly and had no place to go but a 135-bed homeless shelter.

He found work at night sorting mail for a temp agency, but was not allowed to sleep at the shelter during the day. “I would go down to the train station and try to lie down for a few hours,” Kilima said. “Then I heard that if you are working, you can get help.”

Kilima now is living in a small apartment in Trenton, with a bed, fan and coffee maker provided by rapid rehousing to get him started. He works recruiting other homeless people for temp jobs.

Kathleen Francois, a case manager for Catholic Charities, said most clients are hard-working people knocked off their feet by a sudden crisis, like Kilima and Scott. “Some of these are working middle-class people. This shows that homelessness can affect anybody, including the middle class,” she said.