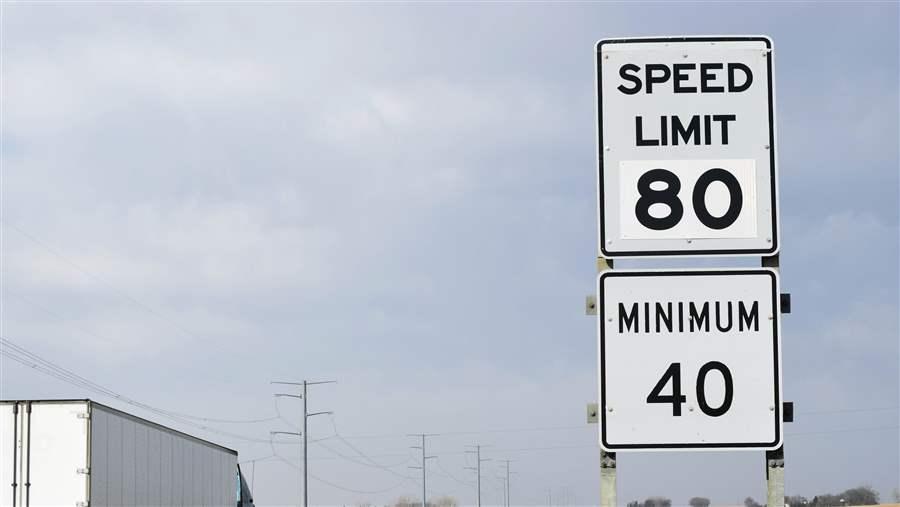 A truck passes by a new 80 mph speed limit sign on Interstate 90 near Brandon, South Dakota, earlier this month. South Dakota became the fifth state to boost its speed limit to 80. At least nine other states have taken up legislation this year to increase their speed limits. (AP)

Wisconsin state Rep. Paul Tittl drives his Toyota Prius 140 miles from his home district to the state capitol in Madison every week. Usually, he keeps up with the fast-moving traffic on the highway. But one day, he decided to lower the pace and drive at the maximum speed allowed – 65 mph.

“Little old ladies scowled at me and gave me dirty looks when they passed me because I was doing the speed limit, and I was in the right lane,” the Republican legislator said. “I was amazed.”

That’s why Tittl decided to introduce a bill that would allow Wisconsin’s speed limit to be raised to 70 on highways. The measure passed the state Assembly earlier this month on a 76-22 vote. It’s now in the Senate.

Wisconsin is one of at least 10 states that took up legislation this year to increase maximum speed limits, according to Richard Romer, state relations manager for AAA. As of Friday, two measures have died, one has been enacted, two are waiting for governors’ signatures and the rest are pending.

Tittl said that Wisconsin is like “an island” because it and Oregon are the only states west of Pennsylvania that still maintain a 65 mph maximum speed limit. And Oregon is considering a bill that would boost its limit to 75 mph on interstate highways. “The roads are safer. The cars are safer. There’s no reason why we can’t be raising the speed limit,” Tittl said. “People are not going to drive excessive speeds and if they do, we have the highway patrol and they’ll take care of them.”

Drivers’ rights advocates argue that if higher speed limits are being set at appropriate levels based on valid engineering standards, roads will actually be safer. They say traffic flow will be smoother and more uniform, and there’ll be fewer accidents.

But many safety experts disagree.

“Study after study shows that when speed limits go up, deaths on those roads go up as well,” said Russ Rader, spokesman for the Insurance Institute for Highway Safety, a nonprofit research group funded by auto insurance companies that does crash tests on new cars. “Crashes at these high speeds overwhelm the safety features that are built into modern vehicles. They’re not designed to handle crashes at 75 or 80 miles an hour.” 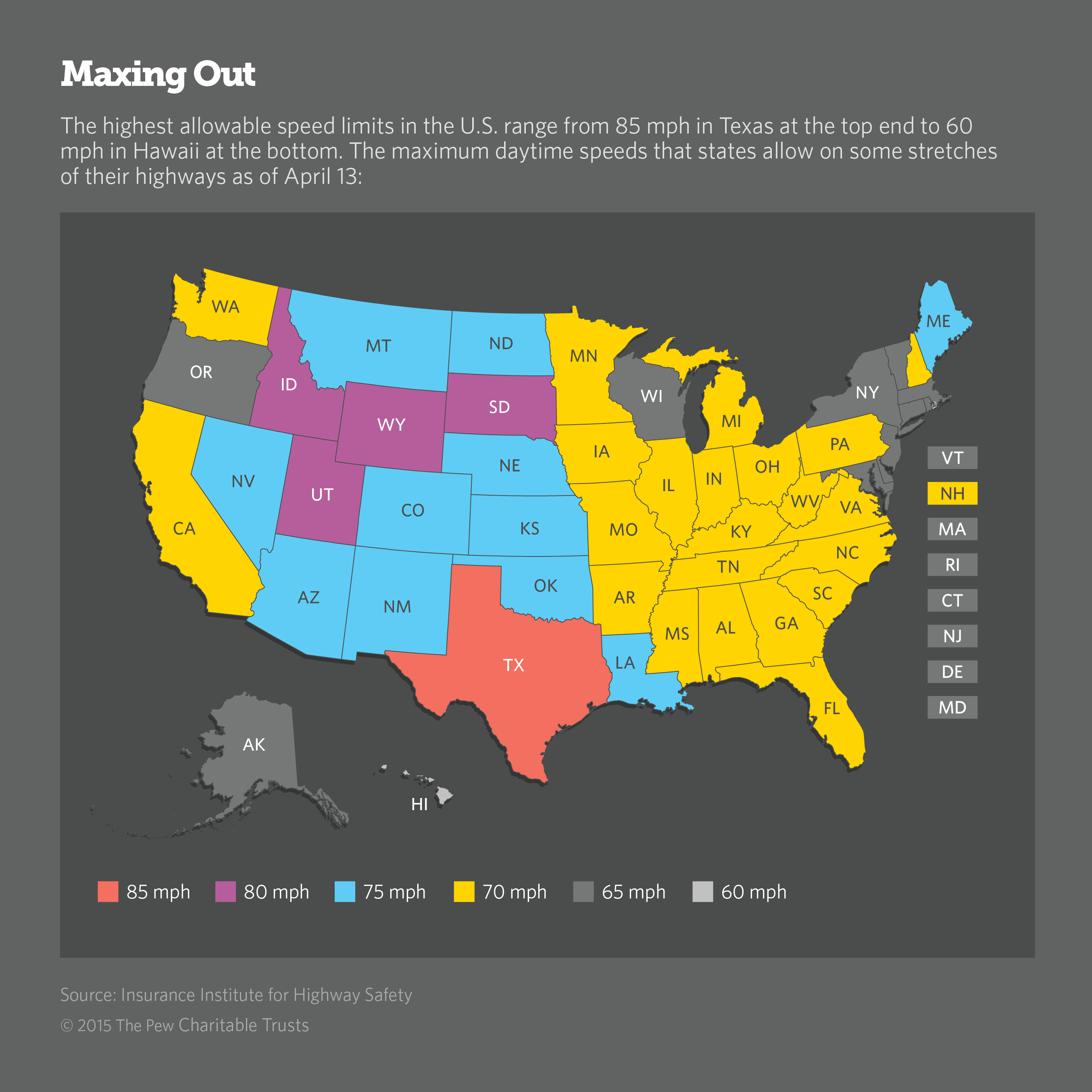 Speed limits have historically been set by the states. But in 1973, as a response to an oil embargo and gas shortages, Congress passed a law establishing a national speed limit of 55 mph. More than a decade later, it allowed states to raise speed limits to 65 mph on rural interstates. In 1995, Congress repealed the law entirely, letting states set their own limits.

Since then, 38 states have raised speed limits to 70 mph or higher on some parts of their roadways, according to the insurance institute. Sixteen states have at least a 75 mph speed limit.

In recent years, a number of state legislatures have taken up measures aimed at either raising the speed limit or giving transportation officials the authority to do so. The results have been a mixed bag.

In Florida, Republican Gov. Rick Scott vetoed a bill that would have hiked the maximum speed limit on some highways to 75 mph. In his veto letter, Scott cited the recent death of a state trooper who was struck and killed by a passing pickup truck.

In Illinois, the legislature voted to raise the speed limit to 70 mph on state toll roads, but that measure was vetoed by then-Gov. Pat Quinn, a Democrat, who cited safety concerns. Late last year, lawmakers overwhelmingly overrode Quinn’s veto.

“People like to go fast,” said Rader of the insurance institute. “Lawmakers like to deliver something that’s popular to their constituents. But states should be vigorously enforcing the speed limits they have, not raising them.”

“The public wants to go faster, and there is no recognition that there’s any kind of a downside to that,” said Jonathan Adkins, executive director of the Governors Highway Safety Association, which represents state highway safety offices. “Legislators think of this as a quick and easy thing to do without any consequences. We don’t agree with that.”

As of Friday, bills to hike the speed limit were pending in Missouri, Montana, Nevada, Oregon, Washington and Wisconsin. Measures that would have increased the speed limit to 75 mph died in Iowa and Ohio. In Maryland and Washington state, legislation was awaiting the governor’s signature. And earlier this month, South Dakota became the fifth state to increase its maximum speed limit to 80 mph on interstates, joining Utah, Wyoming, Idaho and Texas (which allows 85 mph on some roads).

Nevada could soon join some of its neighbors. A bill that would allow the speed limit to be raised to 80 mph on some rural highways passed the Senate on a 16-4 bipartisan vote earlier this month. It is now in the Assembly.

“I think this is a prudent thing to do. It would let people drive legally at the speed they’re already driving at now,” said the bill’s sponsor, Republican state Sen. Don Gustavson, a former truck driver who represents a rural district that encompasses more than 37,000 square miles.

“It’s not over the top. In Europe, you have unlimited speed, you have people going 100, 120 miles an hour,” Gustavson said. “People drive at a speed they’re comfortable with. If they don’t want to drive at 80, they don’t have to. But stay in the slow lane.”

Across the country, supporters of higher speed limits point to a number of studies to support their argument. One they cite is a 2008 Purdue University study, which found that raising the speed limit on an interstate highway in Indiana had not increased the probability of fatalities or serious injuries.

“It sounds counterintuitive, but it’s not,” said John Bowman, vice president of the National Motorists Association, a membership-based group that represents drivers.

Bowman said that traffic engineers generally calculate safe speeds by looking at how fast traffic naturally travels on a given stretch of road and figuring out the speed that 85 percent of vehicles do not exceed.

“The idea is to set the speed limit based on the speed people already are traveling at,” Bowman said.

But safety advocates say that the research is clear that if the speed limit is increased, more people will die in speed-related crashes. They also cite National Highway Traffic Safety Administration data that shows that in 2013, there were 9,613 speed-related fatalities.

“We’re making a tremendous amount of progress in reducing drunk driving and more people are wearing their seat belts,” said Adkins, of the governors’ highway safety group. “Traffic deaths are down about 25 percent since about 10 years ago. But one of the areas we haven’t made progress in is speed-related fatalities.”

Adkins said that his group doesn’t have a recommendation about what the speed limit should be because it depends on road conditions and engineering, which vary from state to state – and from highway to highway. What might work on long rural patches of road in Idaho or Wyoming may not work in Massachusetts, Adkins said.

But he and other safety advocates say that regardless of conditions, higher speeds are dangerous. For example, they point to a 2009 report in the American Journal of Public Health that found a 3.2 percent increase in fatal crashes between 1995 and 2005 attributable to higher speed limits.

“As speed limits and speeds go up, a driver’s reaction time is limited,” Adkins said. “The crash is more likely to be severe. Those laws of physics haven’t changed. You’re not able to react to what that guy or gal next to you is doing. They might be on their cellphone or be impaired. They might pull right in front of you and you have to be able to react to that.”

Safety advocates also say that posted limits are simply a cushion, and that drivers frequently go 5 mph to 10 mph above them. “Guess what happens if you have a crash at 95 mph?” Adkins said.

Florida Democratic state Sen. Arthenia Joyner, a strong opponent of last year’s failed legislation to hike the speed limit in her state from 70 to 75, agrees.