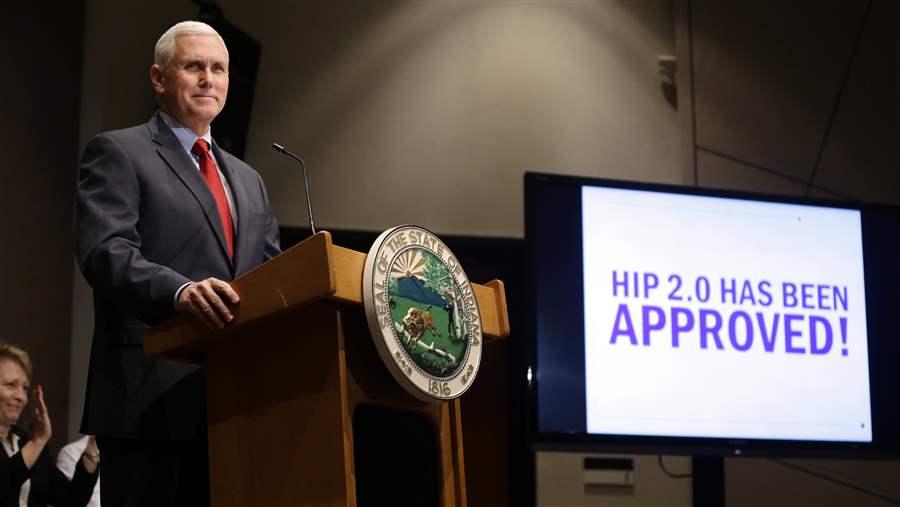 Fifteen states are betting they can convince more doctors to accept the growing number of patients covered by Medicaid with a simple incentive: more money.

The Affordable Care Act gave states federal dollars to raise Medicaid reimbursement rates for primary care services—but only temporarily. The federal spigot ran dry on Jan. 1. Fearing that lowering the rates would exacerbate the shortage of primary care doctors willing to accept patients on Medicaid, the 15 states are dipping into their own coffers to continue to pay the doctors more.

It seems to be working.

In Indiana, which is spending about $40 million a year in state dollars to keep the higher reimbursement rate, an additional 335 doctors have started accepting Medicaid patients since the beginning of this year. So have more than 600 other medical providers, such as nurse practitioners and physician assistants.

“We’ve seen good results,” said Joe Moser, the state’s Medicaid director. “We are interested in seeing if the results continue, and we have every reason to think that it will.”

Colorado has had a similar experience. There the number of new providers participating in Medicaid is increasing by about 100 each month, according to Marc Williams, spokesman for the Department of Health Care Policy and Financing.

In addition to Indiana and Colorado, Alabama, Iowa, Maryland, Mississippi and New Mexico are keeping reimbursement rates where they were before the federal bump ended. Connecticut, Delaware, Hawaii and Maine, Michigan, Nebraska, Nevada, and South Carolina also are continuing to pay higher rates, though they aren’t as high as they were before the federal money disappeared, according to a March report to Congress from the Medicaid and CHIP Payment and Access Commission (MACPAC).

In the 23 states that have indicated they won’t continue to make the higher payments, payments for primary care will fall 47 percent on average this year, an Urban Institute analysis estimates.

David Schultz, a family physician who runs a clinic with a high percentage of Medicaid enrollees in southwestern Indiana, said low Medicaid reimbursement rates had made it increasingly difficult to maintain the practice.

“Frankly, we were losing money and losing personnel,” he said. “We had to increase the numbers of people we saw every day, stayed open much longer, worked through lunches, not taking half-days off.”

The higher rates haven’t changed his life enormously, he said, but the office has at least been able to cut back on the heavy scheduling.

In 2012, a third of primary care doctors didn’t accept new patients with Medicaid coverage, according to a previous MACPAC report to Congress. Only 25 percent of patients covered by Medicare, the government health program for seniors, were turned away. And only 15 percent with private insurance were.

Before the federally subsidized higher reimbursements were paid, Medicaid paid only 59 percent of what Medicare did for primary care services, according to the Henry J. Kaiser Family Foundation.

When the federal subsidy ended, states had to decide whether to continue to pay higher rates with little hard data on whether doing so would persuade more doctors to accept Medicaid patients. Other factors, such as the relatively long time it takes doctors to receive their Medicaid payments, also may contribute to their reluctance to take on Medicaid patients.

A multistate study on the impact of the reimbursement increase published in the New England Journal of Medicine in February found that the availability of primary care appointments for Medicaid patients had increased 7.7 percent with the higher payments. But the study did not examine how many more doctors were accepting Medicaid patients.

There was, however, anecdotal evidence from individual states. Alaska, for example, has long paid Medicaid reimbursement rates that are higher than those for Medicare. Margaret Brodie, director of the Division of Health Care Services, said she believes that’s why the state hasn’t had a shortage of Medicaid providers.

And in Connecticut, the number of primary care doctors participating in Medicaid was 3,589 at the start of this year, up from 1,622 on Jan. 1, 2012, the year before the fee bump, according to David Dearborn, a spokesman for the Department of Social Services.

Paying for the Bump

The states that are continuing the higher payments are turning to a variety of sources to finance them.

Nebraska is using state general funds for the $8.9 million it needs to pay the higher rate. Maine is redirecting $7.4 million in state tobacco settlement money to help pay the higher rates. To get the $18 million it will cost to fund the increase for six months, Colorado is relying on an advantageous recalibration of its federal-state Medicaid match.

Maia Crawford, a program officer at the Center for Health Care Strategies, a nonprofit that focuses on improvements in publicly financed health care, argues that maintaining the higher rates isn’t a heavy price for states to pay in return for “garnering good will among Medicaid providers and working to ensure that Medicaid stays well stocked with providers.”