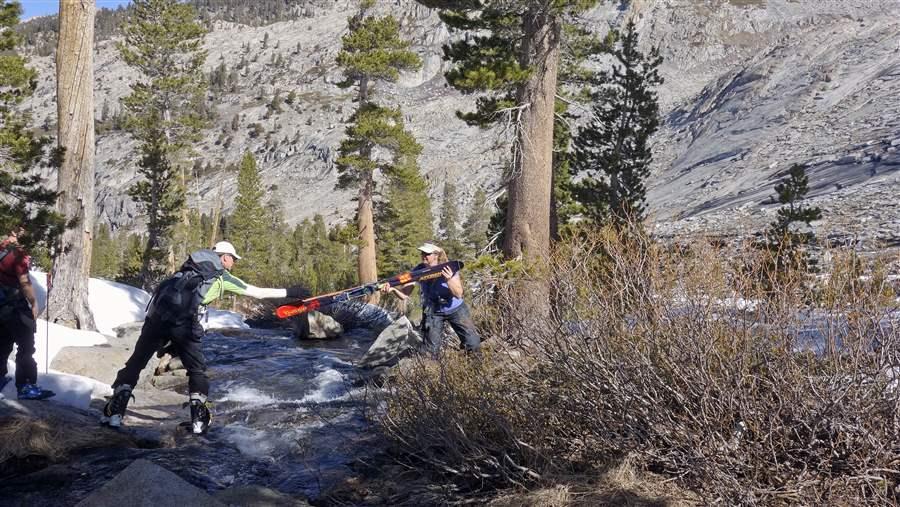 Skiers last month cross a creek in a part of Sequoia National Park that is usually covered by feet of snow through March. California’s drought has attracted the most attention, but many other states are facing similar problems. (AP)

With all the attention focused on California’s water woes, an observer might conclude that the Golden State’s drought is the exception. It isn’t. Forty states expect to see water shortages in at least some areas in the next decade, according to a government watchdog agency.

In a 2013 survey by the Government Accountability Office (GAO), state water managers from around the country said they expect freshwater shortages to continue into the next decade, even under what they described as “average” conditions. If those conditions change—whether because of rapid population growth, unusually low snowfall or rainfall, or accelerated economic growth—the situation could worsen.

“As far as other states, if they haven’t seen it in the past, it’s something they will see in the future,” said Ben Chou, a water policy analyst in the Los Angeles office of the Natural Resources Defense Council, an environmental group.

Late last month, Democratic California Gov. Jerry Brown implemented mandatory water conservation rules. The rules ban all restaurants, bars and hotels from serving water unless customers ask for it, ban the watering of lawns and landscaping within 48 hours of measurable rain, and require municipalities and private companies to limit lawn watering to two days a week.

The lawn-watering limits are likely to have the most impact, since outdoor irrigation makes up 44 percent of water use in the state’s urban and suburban communities, according to the state water board. The past three years have been the driest three years in California history dating to the 1849 Gold Rush, the board said. Low snowpack, combined with 2014 being the hottest year in history in the state, exacerbated the situation.

Residents of other states should take a lesson from California, Chou said. “Attention on California is due to the size of the state and the fact that we grow about half of the nation’s produce,” he said. “Other states have started looking at it, especially where water supplies are at a premium.”

Montana, for example, was listed in the GAO report as the state most likely to have a statewide water shortage in the next decade. Many other western states are in a similar predicament.

Tim Davis, Montana Water Resources Division administrator, said his department told the GAO that in any given year, any part of the state could have a water shortage. He said that last year, most of the state was fine, but the southwest corner was dry. Entering this irrigation season for farmers, Davis said the southwest region remains dry as is “much more of the state.”

Under direction from the Montana Legislature, Davis said his department has begun to plan for water shortages.

“Drought is one of those disasters that you have to plan for,” he said. “You can’t just immediately go out there and change how you’re using water on the ground or invest in efficiencies unless you have been doing it all along.” He said the state is making plans to share water between communities during times of drought, along with changing field irrigation methods to save water. 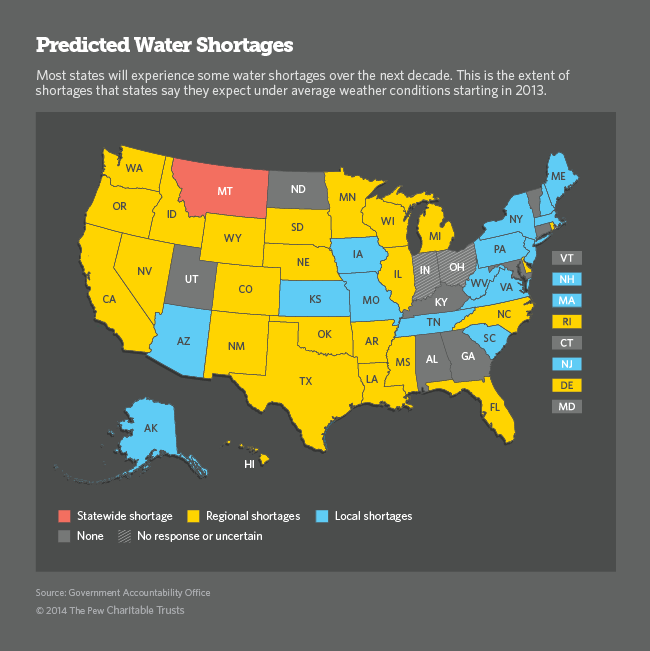 Crisis has a way of focusing the mind. Take Texas, for example.

About 36 percent of Texas is experiencing moderate or exceptional drought, according to Dr. Robert Mace, deputy executive administrator of the Texas Water Development Board. That actually represents an improvement. In 2011, 100 percent of the state was experiencing drought, the first time that had happened since the state started keeping records in the 1880s.

The crisis grabbed the attention of Texas lawmakers, and in 2013 they sent a referendum to voters calling for $2 billion of the state’s rainy day fund to be used to leverage $27 billion in bonds to implement a state water conservation plan. The referendum passed with 74 percent of the vote.

Mace said the plan is being implemented as water demands in the state continue to grow. He said the population of Texas is expected to increase by 80 percent in the next 50 years. “We are working with water providers, water managers, to try to plan for enough water in case of a repeat of the ‘drought of record,’” he said. “We are taking a cold, sober look at what the needs (for) water are going to be.”

The plan includes allowing bordering communities to tap water from each other, and state money for emergency well drilling. “The communities that really struggle with drought are the smaller communities,” he said. “(State officials) will go out and make suggestions on how to run their systems more efficiently.”

In Kansas, drought conditions also are a little better this year. Last year, 93 percent of Kansas was facing severe drought, according to the U.S. Drought Monitor, but this year things have improved slightly, according to Tracy Streeter, director of the Kansas Water Office. The improvement is mostly due to more rainfall, which varies so much from year to year the state is forced to plan for the worst. The worst recorded drought was in 1952-57. “We try to benchmark to that point,” Streeter said.

In a report to Republican Gov. Sam Brownback completed in January, the water office, along with other agencies and citizen groups, painted a bleak picture. The report notes that the Ogallala Aquifer is declining faster than it is recharging, and that reservoirs are filling with sediment. If nothing changes in the next 50 years, the report predicted, the Ogallala will be 70 percent depleted and the state’s reservoirs will be 40 percent filled with sediment.

The group called for the creation of a water resources subcabinet to advise the governor and a task force to develop financing for water resource management, including alternatives that utilize public-private partnerships.

Streeter said the subcabinet has been created and will have its first meeting soon. But Kansas’ struggle to fill an estimated $340 million budget gap has stalled progress on the task force recommendation that the state find money to implement water conservation plans.

While water problems are worst in the West, the East is not immune. According to the GAO report, North Carolina and Delaware are the eastern states most likely to experience regional water shortages in the next decade.

Kansas’ Streeter says more states in the East are asking for his advice as they prepare for a future with less water. “Drought is insidious, it doesn’t land on you overnight, it creeps up on you,” Streeter said. “Agriculture feels it first—you can start having crop failures within weeks of having no rain. Everybody else takes months.”

According to the U.S. Drought Monitor, the western part of North Carolina is already “abnormally dry,” though it doesn’t yet meet the “drought” definition. Sarah Young, a spokeswoman for the North Carolina Department of Environment and Natural Resources, said state officials talk with the federal drought monitoring agency every week to assess the situation in the state.

It has been several years since North Carolina experienced drought conditions, but in 2007 and 2008, it suffered the worst drought in its history. That prompted a state law expanding the powers of the governor and local officials to respond. The law also encourages conservation and cooperation among communities. North Carolina is experiencing population growth and changing weather patterns that “leave us vulnerable to more serious droughts in the future,” according to the state water plan.