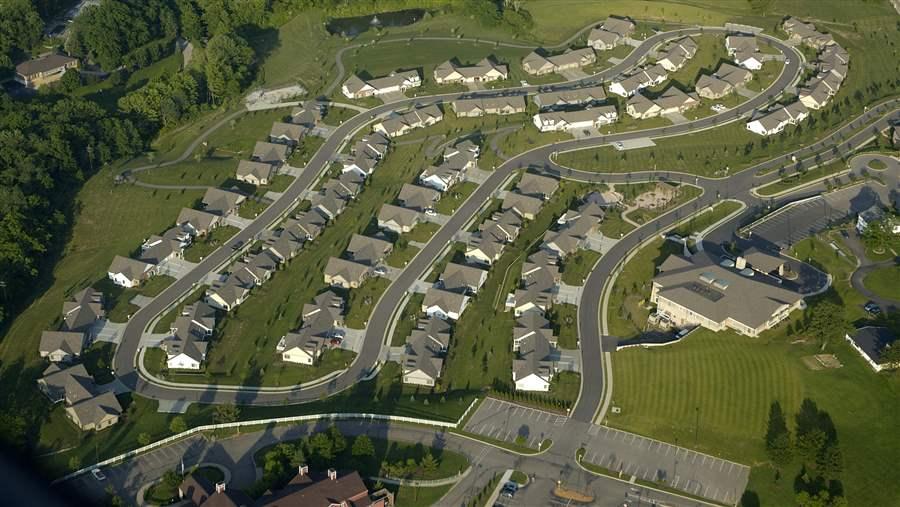 The Great Recession stalled population growth in the exurbs. But new census data show that the far suburbs are enjoying a renaissance. They are now the fastest growing areas in the country.

Despite the designer outlets, the vibe is decidedly rural Americana. Tractors chug the roads. Masonic symbols emblazon the county government building. It’s a “small town feel” that Ginny Tarver says drew her to the area from Naples, Florida, to get married and work as an executive  assistant in the county building.

Dawson is one of the fastest growing counties in Georgia and reflects a demographic shift in the nation: a return to exurbia. New census data show that for the first time since 2010, the outermost suburban counties are growing faster than urban counties and close-in suburbs, according to analysis by the Brookings Institution. People are moving back to the exurbs, some for jobs, others for bigger and more affordable homes in a more wide-open space.

“Once the economy improved, exurbs started growing,” said Joel Kotkin, presidential fellow in urban futures at Chapman University. “Basically, the recession did not revolutionize human beings. As they get older, they want to own something and they want to do it with some degree of privacy. If they can do it closer to work, they do it, but the vast majority of jobs aren’t in the cities.”

A decade ago, the exurbs were the hot thing in real estate. Between 2005 and 2006, the peak growth period for exurbs, urban counties lost over 1.3 million people as people left for the far reaches in surrounding counties.

Young professionals in search of more affordable housing gravitated there, lured by sprawling subdivisions. Exurbs gained about 146,000 new residents through domestic migration, according to William Frey, a senior fellow at the Brookings Institution, who analyzed the new Census Bureau population estimates for counties and metro areas, which were released on March 26.

But when the housing bubble popped, so did the population growth in the outer ring suburbs. Easy credit disappeared while gasoline prices skyrocketed, making lengthy commutes unattractive. People, particularly young people, couldn’t afford to move, and so they didn’t, Frey said.

“There was overbuilding in the suburbs and exurbs” before the housing bubble collapsed, Frey said. “That was one extreme. Then we saw the other extreme, when everything stopped in the exurbs.”

But now, exurbia is showing signs of rejuvenation, Frey said. “People are able to qualify for (mortgage loans for) homes; they’re willing to take on the risk of a mortgage. Developers see that. It’s a matter of supply and demand.”

The U.S. has always been a nation of movers. For decades, about one in five people moved over a one year period, according to the U.S. Census Bureau. Today, about one in nine moves each year.

Typically, young adults age 18 to 34 are the ones loading the U-Haul trucks, according to the census. But the Great Recession, which technically ended in 2009, stalled life transitions for many millennials who found themselves shut out of the job market and stuck in their parents’ basements, Frey said. Without stable job prospects and saddled with student loans, many young adults delayed marriage and parenthood. Buying a house became a dream deferred.

In the immediate aftermath of the recession, the number of young adults packing up and moving declined, according to the Census.

During that time, demand for suburban houses was low and they weren’t being built, Frey said. Meanwhile, cities grew. Between 2010 and 2013, the average annual growth rate for cities nearly doubled the rate of the previous decade, he said. During that time, cities with more than 250,000 people saw their populations increase more than 1 percent a year. The fastest growing were Washington, D.C., Denver, Seattle, Austin and Charlotte, North Carolina. Demographers declared the exurbs dead.

But between 2013 and 2014, core urban communities lost 363,000 people overall, as migration increased to suburban and exurban counties, according to Frey.

The small but significant growth of the exurbs indicates that the housing market may be rebounding, Frey said. “People said millennials wanted to live in cities, close to cool jazz clubs. But young people might have settled in a city because they had no place to go.” Frey said. “It’s too soon to say how much of this is changing preferences—and how much of it is the economy.”

The Lure of the Exurbs

The return of the exurbs comes as no surprise to Joel Garreau, who wrote about the rise of the new urban centers in his 1991 book, “Edge City: Life on the New Frontier.”

“What you saw before the crash is now coming back with a vengeance after the crash. This is not a blip,” said Garreau, the professor of law, culture and values at the Sandra Day O’Connor College of Law at Arizona State University. “The core question for states is, ‘What’s the future of my town or my city?’ ”

Historically, where we choose to live is driven by the technological advancements of the day, according to Garreau, from the advent of boats, to railroads, to jet planes to the World Wide Web. With cellphones, WiFi and Amazon.com, workers no longer need to be confined to one place. Professionals with certain skills could work and live where they wanted—and the world would come to them in the guise of a brown UPS truck.

But to call these rural hot spots “exurban,” Garreau said, is missing the point. As he sees it, today’s urban exiles aren’t looking for a lengthy commute from the far suburbs to a downtown office. They’re seasoned professionals with big incomes who’ve grown tired of the urban rat race, he said. They’re looking to completely eradicate the notion of commuting to work and toiling from 9 to 5. Rich greenery and wide-open vistas are a must.

But not just any exurb will do.

“We can find places that are fabulous and have mountains and streams and we can get anything delivered to us,” he said. “But we’re still craving community. The places that are good for face to face contact will thrive. The ones that won’t will die. You’ve got to create a place that will give you a reason to get out from behind your computer screen and interact with real life, flesh and blood human beings.”

Case in point: Santa Fe, New Mexico, a remote town of about 70,000 that became the darling of urban expats in the early parts of the last century, thanks to its beautiful mountain vistas and pueblo-style architecture. Artists (such as Georgia O’Keefe) and nuclear scientists alike came for a visit and decided they never wanted to leave. Today, Santa Fe is a foodie haven, home to a world-class opera, a booming arts scene and quirky shops. Other exurban outposts looking to establish themselves could learn from this “Santa Fe effect,” Garreau said. “You’ve got to give them a reason to stay.”

Mike Berg, chairman of the Dawson County Board of Commissioners, said he’s very aware of this. Research commissioned by the county found that Dawson’s population would nearly quadruple over the next 20 years, from about 22,000 now to 100,000. To comfortably accommodate such an explosion, the county has to strengthen its infrastructure, especially when it comes to ensuring its water supply. (Georgia has been in a protracted water battle with neighboring Florida.)

To safeguard the county’s future, Berg said, “We’ve got to make sure we have amenities that folks enjoy.”  The county is unusual in that its tax base is heavily reliant on sales taxes rather than home property taxes. Several years ago, the county, along with four other local counties, was awarded a $38 million federal grant to expand fiber optics communications in the region, Berg said. Faster Internet helps businesses in the area—and appeals to telecommuters.

“The exurban group doesn’t necessarily need a high-paying job or to feel like they’re part of a massive community,” Berg said. “They look to pockets like ours that have the amenities they need, but they’re not as closed in.”

When Tarver moved to Georgia to be with her husband, they never considered living in Atlanta. “We didn’t want that hustly-bustly life,” Tarver, 47, said. The exurbs suit her just fine. “When I drive to work, I don’t have any stop signs,” she said. “It’s the prettiest drive.”

Water Woes Editor’s Picks From Around the Web
Related Resources
Since Recession, Tax Revenue Lags in 30 States Funding Challenges in Highway and Transit Homeownership in Philadelphia: On the Decline The Geographic Distribution of the Mortgage Interest Deduction Millennials in Philadelphia: A Promising but Fragile Boom
RELATED
Topics
Demographics
Places
Georgia