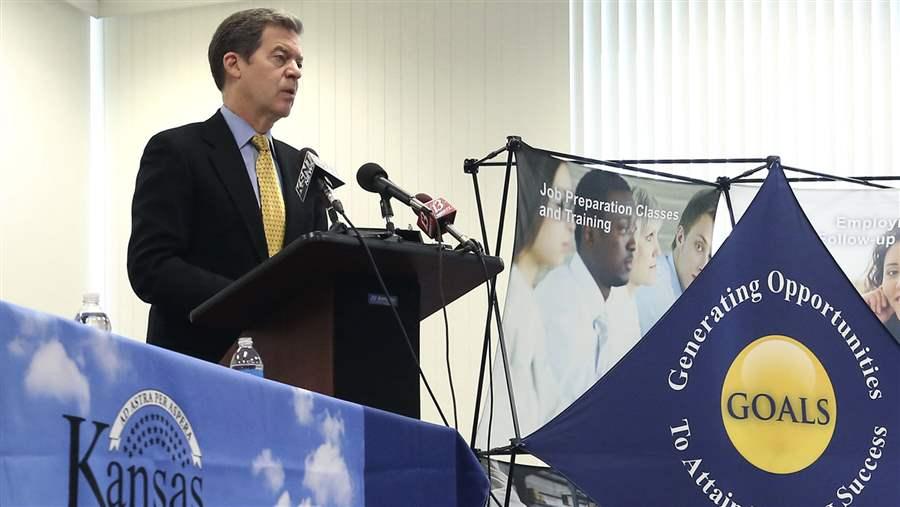 Republican Gov. Sam Brownback announced March 23 that Kansas will expand a jobs training program under a federal grant. His state is one of 10 that will launch pilot programs aimed at reducing long-term unemployment and food stamp rolls. (AP)

After years of struggling with stubbornly high unemployment and elevated food stamp rolls, 10 states and the federal government are embarking this year on an ambitious new effort to help the jobless find work.

Passed as part of the 2014 Farm Bill, the U.S. Department of Agriculture (USDA) has granted $200 million to 10 states to help solve two of the most prominent, lasting effects of the Great Recession: long-term unemployment and high enrollment in the Supplemental Nutrition Assistance Program (SNAP), commonly referred to as food stamps. (USDA oversees the food stamp program.) Pilot programs in California, Delaware, Georgia, Illinois, Kansas, Kentucky, Mississippi, Virginia, Vermont and Washington will receive the grants.

The new programs will target populations of food stamp recipients who have historically been tough to reach through existing job placement and training programs, such as the homeless and people with substance abuse problems. They range from Kentucky’s plan to work closely with private employers to train people for better jobs to Vermont’s focus on people with drug addiction problems.

Federal and state officials — along with advocates for the poor — say some of the pilot programs, which are expected to begin later this year, could provide a model for similar efforts nationwide. They say efforts will be more targeted toward getting people lasting jobs or skills than previous education and training programs, which have been derided as “low-intensity” and more focused on ensuring people meet work requirements. As part of the pilots, outside analysts will study the programs’ effectiveness for their three-year duration to evaluate what works.

States and the federal government have spent billions of dollars on SNAP, and the training and placement programs people must participate in to get food stamps. Many welfare and fiscal analysts say finding new, better ways to help people find work could save money and possibly reshape the longstanding debate in Washington over food stamp spending and work requirements for the program.

“There’s a lot of pressure … to increase work requirements,” said Ed Bolen of the left-leaning Center on Budget and Policy Priorities. “(Congress) wisely said we’re not going to just pass new work requirements. They realized there just wasn't a lot of information about what has worked.”

There’s plenty for states to work on: Although the national unemployment rate has fallen to 5.5 percent, more than a dozen states have jobless rates above 6 percent. Worse, many of the jobless are the “long-term unemployed,” people who’ve been out of work for 27 weeks or longer.

In 27 states and the District of Columbia, a third of the jobless were long-term unemployed last year, according to a Stateline analysis of Bureau of Labor Statistics data. In five states and D.C., the average length of unemployment was 40 weeks or more.

Kentucky and Georgia are two states where helping the long-term unemployed has taken center stage. Both states were hit hard by the economic downturn, and about a third of their jobless population has been out of work for longer than 27 weeks. Each had an average length of unemployment longer than 30 weeks last year.

In Kentucky, the new program will piggyback on the Obama administration’s so-called “Promise Zone” initiative. Announced last year, the initiative promised federal education and regulatory assistance in distressed areas with proposed economic development projects. One zone is in southeastern Kentucky.

Department of Community Based Services Commissioner Teresa James said Kentucky’s pilot program is designed not just to boost the local economy and help people find jobs, but to zero in on those who already may be working, but in low-paying jobs. Kentucky will partner with its community and technical colleges to help people get training for better jobs. Training also will be coordinated with internships, work study and apprenticeships with private employers. If people who are working can earn more, the idea is, they will become less dependent on the SNAP safety net.

“We want to build stability into our citizens and our commonwealth so that you’re not dependent on benefits in moments of crisis,” James said. “I’ve never met a person in 30 years that looked at me and said, ‘Teresa, I love being on welfare and food stamps and it’s a great life.’ That’s not the way most people feel, most people are just trying to figure out how to survive.”

Officials also hope the program will capitalize on economic development efforts in the region to help create jobs for those who finish the training program. “In the past, we tried to offer education and training, but there were no jobs,” James said. “Now we’re going to be training a workforce that will be able to take those jobs.”

Georgia is focusing its pilot program on those who’ve been out of work for a year or longer. The state hopes to base it on what it calls a “medical HMO model,” in which officials take a broad approach in coordinating state assistance to help people looking for work.

Depending on the situation, people in the program could work with the state’s departments of Labor, Economic Development, Behavioral Health and Development Disabilities, and technical college system to address their specific shortcomings — such as a lack of skills, basic education, or even job readiness when it comes to building resumes and developing interviewing skills — to help them find work.

“We felt we were seeing a lot of people that had just stopped looking for work,” said Sandra Frederick with the state’s Department of Children and Family Services. “We had to do something to get them back up and out looking for work again.”

Other groups of people on public assistance may prove a greater challenge than the long-term unemployed, and many of the states’ pilot programs will address them.

Vermont, for example, is targeting those with drug abuse problems a year after Democratic Gov. Peter Shumlin garnered national headlines for devoting his entire State of the State address to the problem of opioid abuse in his state. The state’s pilot program will go beyond education and training to offer clinical assessments for food stamp recipients with addiction problems.

Robert Arnell, an analyst with the state’s Department of Children and Families, said officials realized that treatment for drug problems was going to have to play a big role in any job-placement program.

“Vermont kind of was very up front about acknowledging that,” Arnell said of the state’s widespread drug problem. “Everybody recognizes that these target populations really need assistance.”

Of the 10 programs approved by the USDA, Washington state’s is the only one that makes specific mention of helping those who have limited English skills or who may be new immigrants.

Babs Roberts of the state’s Department of Social and Health Services said Washington has strived to have programs for refugees and immigrants, and the new program would extend those efforts. Many new immigrants aren’t eligible for some safety net programs such as Temporary Assistance for Needy Families, she said, and they can stay in other programs for just eight months.

The pilot program will allow the state to try new strategies for working to overcome language barriers while paying wages for internships or apprenticeships that can lead to a job.

“This allows us to do expand (English as a second language) and other culturally appropriate services that will help eliminate barriers,” she said.

Some who study safety net programs are concerned the programs will get people ready to work without landing them in the workforce. In many instances, the programs won’t be paired with a strict work requirement.

“There isn’t a work requirement in the law, these pilot programs aren't a work requirement, and it does give states a lot of flexibility,” said Rachel Sheffield of the conservative Heritage Foundation. Giving states too much leeway may result in lax programs, she said, which allow participation in training programs to collect SNAP benefits for a long time.

“Some of them might put into place good programs, and hopefully they will, and some more than likely will not,” she said. “It’s a little more difficult when there isn’t an actual incentive to get people to participate.”

But others see the prospect of 10 new SNAP/jobs programs, coupled with extensive study, as a promising strategy. For years, said Bolen of the Center on Budget and Policy Priorities, there was little information on what type of jobs programs worked, even as lawmakers in Washington sparred over what to do with the program’s $80 billion price tag.

Going forward, Bolen said, these programs could give Congress a new way of addressing employment issues in food stamps and maybe even reduce food stamp rolls.

“These programs, should they prove successful, will make a good case for increased funding for employment and training services,” he said.