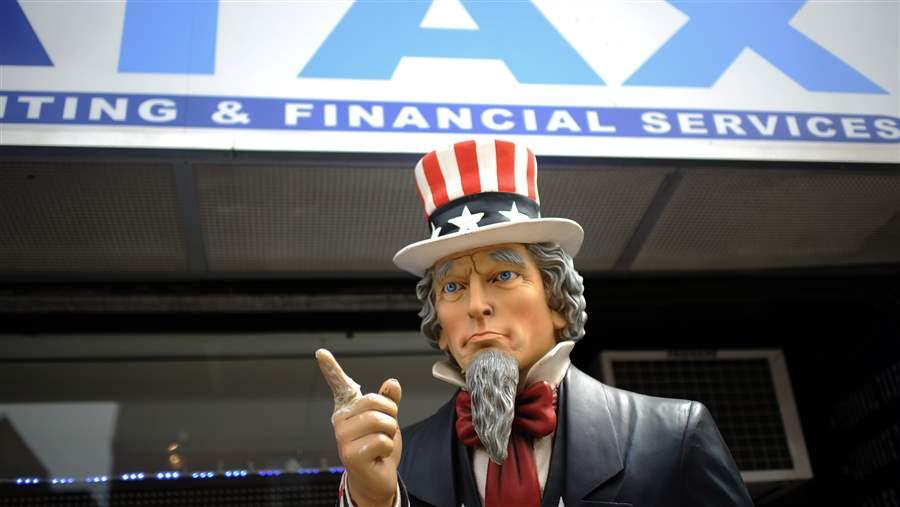 A statue of Uncle Sam stands outside a tax preparation office in Queens, New York, as the annual April 15 deadline to file federal taxes approaches. Some states are looking to end the “double deduction” of state and local taxes from their state income taxes. (AP)

A quirky “double deduction” tax break that benefits mostly higher-income taxpayers is halfway to extinction in Vermont, and other states may follow suit in their pursuit of revenue to plug budget gaps or fund priorities.

In Vermont and six other states – Oklahoma, Arizona, Hawaii, Louisiana, North Dakota and Georgia – taxpayers who itemize their deductions are allowed to deduct what they paid in state and local taxes on their state income tax returns, just as they can on their federal tax returns.

But since the starting point for state income tax calculations usually is the lower federal adjusted income that already takes the deduction into account, taxpayers in those states get the extra benefit of essentially deducting their state and local taxes twice. Thus, the “double deduction.” Hawaii and Vermont limit the deduction, but still allow it.

It works out to a nice extra tax break, especially for higher income taxpayers who are more likely to itemize their deductions and more likely to have paid higher state and local taxes.

No one is sure how and where the tax break originated. It’s not like many other kinds of deductions, which were prompted by particular public policy goals, such as the home mortgage interest deduction that was instituted to encourage home ownership.

“I think it’s a strange and pointless deduction,” said Carl Davis, a senior analyst with the Institute on Taxation and Economic Policy, a non-partisan research organization. “It’s basically an accident. It exists because states coupled their taxes to the federal. The vast majority of states don’t allow the (second) state and local tax deduction.”

There was a flurry of efforts to repeal the double deduction at the beginning of the recession in 2009 and 2010, when states were looking for additional revenue. New Mexico and Rhode Island repealed it in 2010, Vermont put a $5,000 cap on the deduction in 2009, and Hawaii imposed an income limit in 2011. Since then, the deduction has largely remained.

This year, however, the Vermont Legislature, in search of revenue to cover a $113 million budget hole for fiscal 2016, is looking to possibly scrap the deduction and cap itemized deductions. The House already has passed it.

Rep. Janet Ancel, who heads the Vermont House Ways and Means Committee, said the move would raise $14 million for the state treasury. Higher income taxpayers would be hit hardest, she said, but middle-income taxpayers also would be affected.

“As for a policy argument for retaining the deduction, I don’t think I could make one,” said Ancel, a Democrat. “But … the impact of eliminating falls more heavily on middle-income taxpayers than I am comfortable with.” Nonetheless, she voted for the measure.

The Senate has yet to take action. But eliminating the deduction has the support of Democratic Gov. Peter Shumlin, who called the elimination “progressive and principled.” He said in his budget message that it would cost Vermont taxpayers who itemize their deductions an average of $175, though upper-income taxpayers would take a $450 hit.

Those who favor eliminating it say the double deduction is an oddity that serves little public purpose.

“Allowing the deduction for state and local taxes is odd and does not make sense from a good tax policy perspective,” said David Brunori, deputy publisher of Tax Analysts, a trade publication. “It makes no sense for federal tax policy and even less so for state policy. The deduction is basically a way of subsidizing other governments. There are better, more transparent ways of doing that.”

Former Hawaii Gov. Neil Abercrombie made a similar argument in 2011 when calling for the repeal of the extra state tax deduction in his State of the State address. Abercrombie, a Democrat, said it was an “absurdity in the tax code, the elimination of which is long overdue.”

But those who oppose doing away with it, including Tom Yamachika, president of the Tax Foundation of Hawaii, a non-partisan tax analysis organization, say doing so is just a roundabout way of increasing taxes.

He said dropping the state and local tax deduction “leads to a severe discontinuity when you reach $100,000 of income.” He said eliminating the deduction could cost a Hawaii taxpayer making $100,000 a year an additional $3,600 in state tax compared to one making $99,999.

In testimony before the legislature in 2011, Yamachika’s group called on the state to raise taxes directly if that’s what it wanted to do, and give voters a chance to more straightforwardly evaluate the action.

Instead, the Hawaii Legislature partially repealed the deduction, getting rid of it for couples making more than $200,000 a year and individuals with incomes over $100,000. Those with incomes under that amount can still take the deduction.

The issue comes up frequently in some of the states, largely because it has no built-in constituency. Homebuilders protest any suggested elimination of the home mortgage interest deduction, for example. Charities protest any attempt to curb deductions for donations. But the same cannot be said for the deduction of state and local taxes.

Louisiana is engaged in a pitched battle over the budget and taxes, as the state faces a $1.6 billion deficit and the legislature seems uninterested in Republican Gov. Bobby Jindal’s recommendations to balance the budget without tax increases. Earlier this year, a tax study commission recommended eliminating the deduction on state returns, saying it would put the state more in line with much of the country. Estimates show that about $350 million could be raised by eliminating the deduction, a bit more than 20 percent of what is needed to close the budget shortfall.

Oklahoma has flirted with eliminating the deduction, and some think it would be a good place to look this year as the state tries to fill a $611 million budget hole.

In 2012, abolishing the deduction was part of an agreement between the governor and legislative leadership, but that bill failed to pass. Last year, two repeal measures in the Senate Finance Committee didn’t survive.

David Blatt, executive director of the Oklahoma Policy Institute, a non-partisan think tank, suggests that doing away with the deduction would be a good place to again look for revenue.

According to Blatt, the deduction primarily benefits higher-income Oklahomans. Taxpayers with incomes above $200,000 a year represent less than 3 percent of all Oklahoma households, he said, yet they claimed a full 75.4 percent of the deduction for state income taxes.

On the other side, almost two-thirds of Oklahoma households (65.7 percent) have income under $50,000, yet this population accounted for just 6.8 percent of the deduction on state income taxes. Eliminating it would garner $97 million for the state, he estimated.

But neither the legislature nor Republican Gov. Mary Fallin seem inclined to look at repeal of the deduction this year. Fallin’s press secretary, Michael McNutt, said he is unaware of any repeal legislation filed so far.

Blatt said he thinks fear of the political ramifications of tax hikes is what’s keeping the lawmakers from touching the issue. “Even though nobody can point to the public policy served by the deduction,” he said, “it’s sort of part of the conversation, but doesn’t seem to get pushed into the final discussion.”