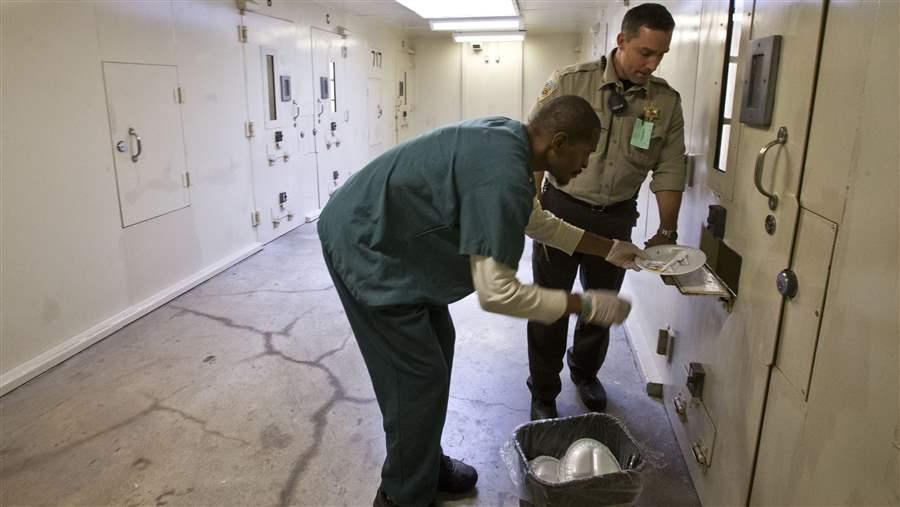 An inmate takes a plate from a prisoner in lockdown, as a deputy watches in the Dane County Jail in Madison, Wisconsin. Wisconsin had nearly 17,000 uninsured adults with serious mental illnesses unable to get treatment under Medicaid last year, a new study estimates. (AP)

More than a half-million adults who said they wanted help with their serious mental conditions last year couldn’t get it because they lacked the resources and weren’t eligible for Medicaid to pay for treatment, a new study finds.

Those people — an estimated 568,886 adults ages 18 through 64 diagnosed with a serious mental illness, serious psychological stress or substance use disorder at the start of last year — lived in 24 states that didn’t expand Medicaid eligibility under the Affordable Care Act in 2014, according to a study published this week from the American Mental Health Counselors Association (AMHCA).

In contrast, 351,506 adults with those same mental health problems got treatment paid for by Medicaid in the 26 states and the District of Columbia, which did expand coverage of the state-federal health insurance program to eligible adults living on low incomes.

The upshot, said Joel Miller, AMHCA’s executive director, is “the health of hundreds of thousands of people would be improved” if all states provided Medicaid coverage as they were given the option to under the Affordable Care Act (ACA).

Indiana and Pennsylvania did not have expanded Medicaid eligibility last year, but they do this year. Using the study’s calculations, that gives an estimated 106,000 people who wanted treatment in those states last year an avenue for care.

(See the map for the number of people in each state with serious mental health problems who got treatment as a result of Medicaid expansion and the number of those who didn’t.)

People who don’t get treatment for their serious mental health problems often end up in local jails or on the streets and homeless. And that can cost state and local taxpayers in other ways.

Bill Lindsey, executive director of the South Carolina chapter of the National Alliance on Mental Illness, said that’s often the case in his state, which is among the two-dozen states that have not expanded Medicaid.

“Right here in Richland County, where the capital is located, the local jail has about 1,000 inmates a night and 300 of them are on psychotropic drugs, which the government pays for,” Lindsey said.

In most states, the AMHCA study found, a majority of the seriously mentally ill who wanted treatment were relatively young – ages 18 through 34 – and white. The same was true of those with substance use disorders.

The AMHCA study is derived from federal data, including the National Survey of Drug Use and Health, which is the federal government’s primary source of statistical information on mental health and substance use. The annual survey involves face-to-face interviews with about 70,000 randomly selected people across the country.

The study is based on people who were diagnosed with serious mental health conditions and had sought help. The population of people with serious conditions who aren’t getting help is estimated to be much larger than that.

An AMHCA report published last year estimated that 6.7 million uninsured adults with serious mental health conditions would have been eligible for Medicaid if all 50 states had expanded Medicaid eligibility as contemplated by the ACA. The report said 4 million of those 6.7 million lived in states that did not expand Medicaid.

Under the ACA, Medicaid was to cover everyone whose income was below 138 percent of the federal poverty line starting last year ($15,521 for an individual). Mental health advocates were overjoyed at the prospect of hundreds of thousands of people without health insurance finally having access to mental health services.

But a 2012 US Supreme Court ruling gave states the option of not expanding Medicaid eligibility. Twenty-four states opted out last year, even though the federal government would pick up 100 percent of the cost of insuring newly eligible Medicaid enrollees for the first three years.