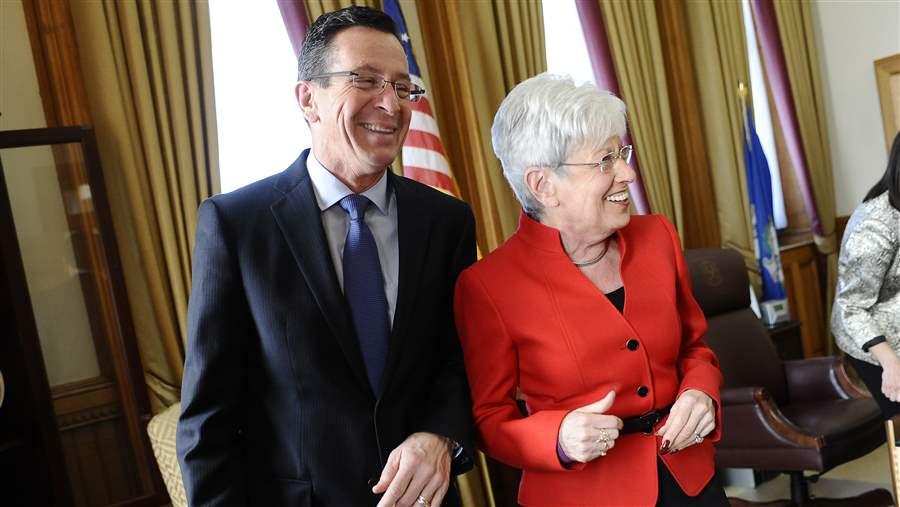 Connecticut Gov. Dannel P. Malloy, left, and Lt. Gov. Nancy Wyman, right, share a light moment as they wait for Wyman to be sworn in for a second term. Wyman, who oversaw the successful rollout of her state’s healthcare exchange under the Affordable Care Act, is one of many lieutenant governors taking on larger roles in their states. (AP)

This story is updated to reflect the correct spelling of California Lt. Gov. Gavin Newsom's name.

A state’s second-in-command is often first to joke about being No. 2. As lieutenant governor of Arkansas, Win Rockefeller liked to say the job was state government’s spare tire: kept in the dark, pumped up and hoped it’s never used.

Now, some lieutenant governors are rising above the punch line.

“We’re seeing an evolution when it comes to the office of lieutenant governor,” said John Mountjoy, director of policy, research and strategic initiatives at the Council of State Governments.

“Lieutenant governors used to be just the special chair of the Blue Ribbon Commission on X,” Mountjoy said, “but they’re now seen more and more as a huge asset.”

The role of lieutenant governors is expanding because the role of governors has grown. Since the terrorist attacks of Sept. 11, 2001, governors have made homeland security and disaster preparedness higher priorities. The Great Recession focused governors’ attention on jobs and international trade.

“It’s not an honorary, ribbon-cutting kind of job,” said Connecticut Lt. Gov. Nancy Wyman, a Democrat who heads the National Lieutenant Governors Association. As chair of the board of directors of Access Health CT, she was responsible for the successful rollout of her state’s healthcare exchange under the Affordable Care Act.

Access Health CT has enrolled more than 500,000 residents in insurance plans, 140,000 of whom were previously uninsured, and is being touted as a national model. Maryland has adopted Connecticut’s “exchange in a box,” and eight other states are reviewing it, Wyman said.

“We’ve had floods, fires, tornadoes and earthquakes,” said South Dakota Lt. Gov. Matt Michels, a Republican who led preparations for the Missouri River floods in 2011, his first year in office. He serves on GOP Gov. Dennis Daugaard’s executive committee or cabinet, heads the state’s retirement system and is coordinating construction of a state veterans’ home.

Still, for most lieutenant governors, “their main role is as a back-up within the executive branch, someone who can become governor,” said Brenda Erickson, senior research analyst with the National Conference of State Legislatures.

Delaware’s lieutenant governor job is vacant until after the 2016 elections. Lt. Gov. Matt Denn, a Democrat, left the post after he was elected state attorney general last year, and the state constitution has no provision for replacing the lieutenant governor.

New Jersey residents found out what can happen when there is no office of lieutenant governor.  In 2001, Republican Gov. Christine Todd Whitman resigned to lead the U.S.  Environmental Protection Agency, and, subsequently, due to a confluence of factors, the state had five governors in eight days.

When Whitman left in February 2001, Republican Senate President Donald DiFrancesco succeeded her as acting governor, as prescribed by the state constitution. But DiFrancesco ran unsuccessfully for governor that November, and his term as Senate president ended a week before Democratic Gov.-elect James McGreevey’s inauguration in 2002. Normally, the new Senate president would have taken over, but after the election the Senate was evenly divided between Democrats and Republicans. That meant it had two presidents, Republican John O. Bennett and Democrat Richard Codey. They agreed to split the acting governor responsibility. The fifth governor was the state Attorney General John Farmer Jr., a Republican who held the job for about 90 minutes to swear in the Senate presidents.

That experience helped convince New Jersey to begin the process of creating the post of lieutenant governor.  It elected its first one in 2009.

In 26 states, the governor and lieutenant governor run as a team in the general election, similar to the president and vice president. In the last decade, four states – Colorado, Illinois, New Jersey and South Carolina – have gone to team elections. South Carolina’s gubernatorial candidates will select their running mates in 2018. Nevada and Arkansas are considering making the switch.

That may not sound groundbreaking, but for a job that has been likened to the Maytag repairman, waiting for the phone to ring, the change signals that the lieutenant governor may be a partner and the state’s top officers will share goals.

Team elections “are an opportunity for a state to best utilize the office of lieutenant governor,” said Julia Hurst, executive director of the lieutenant governors group, adding that if the governor picks a running mate, the two are more likely to work together. Not always, though.

“I’ve known some lieutenant governors who run as a ticket and don’t even know the governor at all. I would rather have a root canal,” said South Dakota’s Michels, who was friends with Daugaard long before they first ran as a team in 2010. He and Daugaard meet weekly and text frequently, Michels said.

Wyman in Connecticut said, “The governor walks upstairs to my office all the time,” adding that it doesn’t hurt that she keeps Diet Coke and pretzels on hand.

When a governor and lieutenant run separately – as they do in 17 states – there can be split political parties at the top. That’s the case in four states: Missouri, New Hampshire, West Virginia and Vermont. A classic example of the conflict that can ensue occurred in California in 2009.

Schwarzenegger’s finance director said the lieutenant governor’s duties “are just really of a lower priority, so we thought we could take his budget down.”

Being from the same party doesn’t guarantee a dream team, however. In Florida in 2010, Republicans Rick Scott and Jennifer Carroll ran together on the gubernatorial ticket. Carroll resigned in 2013 at the governor’s request after being interviewed by police during a racketeering probe. She was never charged.

She wrote in her autobiography last year that she was treated as “an unwanted stepchild,” belittled by staff and told to make an appointment if she wanted to talk with the governor.

While the No. 2 job is changing, it’s still seen mostly as a stepping stone to higher office. When The Los Angeles Times endorsed California Lt. Gov. Gavin Newsom for re-election last fall, the editors wrote: “This is a notoriously do-little job, a bully pulpit at best, a ceremonial post at worse, a relic of a past era…Being lieutenant governor mostly serves as a perch for gubernatorial candidates-in-waiting.”

Newsom won re-election in November and announced three months later that he plans to run for governor in 2018.