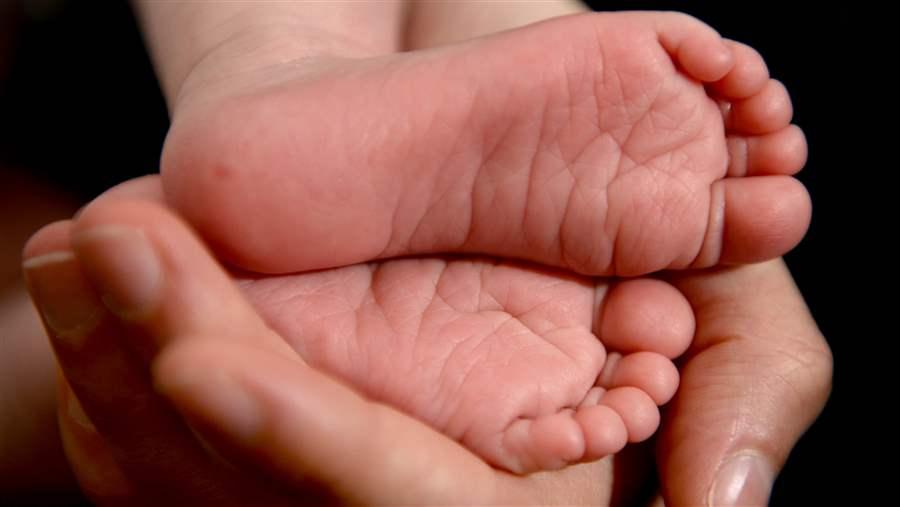 A mother cradles her newborn baby’s feet. Some states are automatically creating children’s savings accounts for newborns to help families imagine and save for college. (AP)

Free money for college may sound like an easy sell, but when parents of newborns in Maine were offered a $500 grant for their infants’ college education, fewer than half signed up.

Even worse, a study found that less educated, lower-income families–those that could benefit most—were least likely to take the money. So last year, Maine changed its strategy. Today, each of the roughly 12,500 babies born in Maine each year receives a $500 grant deposited automatically in a college savings account.

For decades, private foundations have promoted the idea of children’s savings accounts to help families imagine and save for their children’s college education. Only recently has it taken root in states, which are targeting the youngest citizens.

The seed amounts tend to be small, but they can make a big difference, researchers say. Children who have even small savings accounts for college are seven times more likely to attend and graduate from college than those who have no savings accounts, reports William Elliott III, an associate professor at the University of Kansas, who has written extensively on children’s savings accounts.

Maine, which launched the nation’s first statewide universal children’s savings accounts in 2008, has the most generous program. And the College Challenge program’s $6.3 million annual budget is covered entirely by a private foundation.

From 2008 to 2013, parents in Maine needed to enroll in the state’s tax-preferred 529 college savings plan to qualify for a $500 Harold Alfond College Challenge grant. Despite extensive marketing and outreach, only about 40 percent of babies were enrolled.

“We worked really hard and we were really amazed” that grants went untaken, said Bill Norbert, spokesman for the Finance Authority of Maine, known as FAME, a quasi-independent state agency that administers NextGen, the state’s 529 plan.

Why was it so hard to sign up parents? “Life gets in the way,” Norbert said, adding that parents of a new baby are busy and the fear of paperwork kept them away – despite the state having simplified its forms and dropped its minimum deposit requirements.

The procedure now could not be easier. FAME gets monthly birth records from the state, then the foundation deposits a $500 grant for the newborn into a master account and notifies parents.

Instead of opting in, parents now can opt out, but few have. Parents are encouraged, but not required, to sign up as well for a separate 529 plan. Students can use the $500 grant, plus earnings, for higher education expenses at in-state and out-of-state colleges and vocational schools.

“We’re incredibly fortunate to have the Alfond Foundation,” said Martha Johnston, director of education for FAME. The foundation is named for the late Harold Alfond, a shoe manufacturer and philanthropist. “It’s a terrific gift for Maine,” she said.

A few states, including Oklahoma and Mississippi, have had limited pilot programs funded by private foundations. San Francisco and Cuyahoga County, Ohio, are among a handful of communities that have children’s savings programs.

The new programs differ from regular 529 plans, which offer federal income tax breaks on earnings and withdrawals and state tax breaks in many states. With 529s, parents make financial contributions and choose how their money is invested. But parents do not direct children’s savings accounts.

Grants to savings accounts typically are held in the child’s name in a master account, which invests the funds and sends periodic statements to the child about the current value of his or her individual account. When the child enrolls in higher education, the grant and accrued earnings can be withdrawn for qualified educational expenses. Rules vary, but if the child does not enroll in higher education by a certain age, he or she forfeits the grant and earnings.

In Nevada, the goal of the “College Kick Start” program is to create a “college-going culture” in a tourist-oriented state where education hasn’t been a priority. The state ranks 47th of the 50 states in high school graduation rates.

College Kick Start provides every kindergartener in public school a $50 grant to start saving for college. Each child also gets a pink, plastic piggy bank and a blue T-shirt with “is going to college” on the front under an arrow pointing to the child’s face.

“We’re encouraging the families and the kids to set the expectation of college. It’s not an ‘if,’ it’s a ‘when,’” English said. Started as a pilot project in 2013 for 3,000 rural students in 13 counties, Nevada Kick Start went statewide last year for a three-year pilot. It has given 66,500 grants so far. Annual compound interest varies, but is expected to average 12 percent for a total of about $220 in 13 years when a student enters college, the Las Vegas Review-Journal reported.

“It’s not going to be $20,000,” then-State Treasurer Kate Marshall said last year. “But what it is going to be is a way to start the conversation with that family, to tell that child that they’re college bound, and to help people think about and get in that door.”

Kick Start’s $1.8 million annual budget is paid through fees the state’s four private 529 plans pay the state treasurer’s office. In June 2016, the state’s 529 board will review the project and decide what’s next.

“One of the challenges we have with the board allocating $2 million a year is to ask them to wait 13 or 14 years” to show college enrollment has risen, English said.

Parents in Nevada are invited to start 529 accounts with their own deposits. Unlike the Kick Start grants, which are started with only a child’s name and school ID number, a 529 requires a Social Security number. That can be an obstacle for immigrant parents, English said.

Action in Other States

Since January, every baby born in Rhode Island automatically has received a $100 deposit in a college savings account. The deposits are funded by AllianceBernstein, a New York investment firm that operates the state’s 529 program. Rhode Island previously required parents to sign up for a 529 but, as in Maine, few did.

Reggie Bicha, director of the Colorado Department of Human Services, sees children’s savings accounts as part of his two-generation strategy to help families in poverty. Colorado aims to launch a three-year pilot savings program for low-income preschoolers in November and hopes to roll it out statewide later.

“Why I think it’s revolutionary—I remember parents I used to work with directly in child protection would tell me, `My kids will never go to college. Nobody in my family ever went to college. Don’t even talk to me about it,’” Bicha said.

With such an attitude, “how are they going to get the kids ready for kindergarten?” he said, let alone stay in school or think about college. But having a college savings account for your child can change one’s attitude, he said. “Parents will do for their kids what they won’t for themselves,” Bicha said.

Financial details are still being worked out, but over three years, Colorado plans to give 6,000 Head Start pupils $50 each in seed money for their savings accounts, said Keri Batchelder, the program coordinator.

“We just want to help families save for college,” said Lynne Ward, the Utah plan’s executive director.  But Utah, which has the nation’s highest birth rate, has not started separate children’s savings accounts.

“In Utah we have more than 50,000 births a year,” Ward said, noting that the cost of providing just $50 each in seed money would exceed $2.5 million annually.

More states are expected to try children’s savings accounts in the next few years.

“Anything new just takes time,” said Mary Fairchild, senior fellow at the National Conference of State Legislatures. “If you had asked me eight years ago are we ready for children’s savings accounts, I’d have said no. Now, with all these innovations coming in, it looks very doable.”

Children’s savings accounts grew from the asset-building movement in the 1990s. Traditionally, government help for poor families has focused on food stamps and welfare, programs that alleviate immediate needs. Asset-building initiatives such as children’s savings accounts are designed to start children and families thinking and planning for the future.

In 1995, then-Democratic Sen. Bob Kerrey of Nebraska proposed KidSave, which would have opened an account for every American child at birth to be used to supplement Social Security after retirement. After that idea fell apart, then-Republican Sen. Rick Santorum of Pennsylvania and then-Democratic Sen. John Corzine of New Jersey proposed the ASPIRE act in 2004 to create restricted savings accounts for all newborns, seeded with $500 federal grants. In 2007, then-Democratic presidential candidate and New York Sen. Hillary Clinton proposed that the government give every newborn a $5,000 “baby bond” to be saved for college or buying a home.

None of the ideas of publicly funded programs got off the ground.

The Corporation for Enterprise Development, or CFED, a nonprofit advocacy group, launched a dozen demonstration projects around the country in the early 2000s.

The CFED initiative was intended from the start to be a time-limited initiative to develop, implement, and test children’s savings accounts.

But Andrea Levere, CFED president, says that early spadework by her group and others is finally beginning to pay off. “What happened, as often happens, is the projects unleashed innovation on the ground,” she said.