Jonathan Moody, a senior associate at The Pew Charitable Trusts, researches and analyzes the fiscal health of states.

Wyoming will mark its 125th birthday this year in a better position than most states: Its energy-based economy is growing along with its population, its tax rates are low, more people have jobs than ever and the state has no general obligation debt.

Things are so good that one of the state’s challenges is deciding how to spend the money accumulating in its rainy day fund. Despite a recent drop in state revenue because of falling oil prices, Wyoming’s Legislative Stabilization Reserve Account still holds $1.8 billion, or about 60 percent of the two-year state budget.

Republican Gov. Matt Mead, among others, said the state does not need such a large savings account. In a recent interview with Pew, he said the rainy day fund has doubled since he first was elected in 2010. While saving for emergencies is necessary, he said, so is investing in infrastructure and education that could help expand one of the nation’s least diversified state economies. “I don’t want to put up a ‘closed’ sign,” he said, “by putting everything under the mattress.”

Since lawmakers started the reserve account in 2005 with $50 million, its growth has quickly driven the state’s overall level of reserves to the second largest in the country as a share of its operating expenses, according to research by The Pew Charitable Trusts. Despite lacking a dedicated source of money, the rainy day fund has increased considerably over 10 years from surplus revenues or direct appropriations by the legislature. Deposits exceeded $600 million in each of the last two biennial budget cycles.

The cash cushion is useful to manage the cyclical swings in revenue in a state such as Wyoming. If the price of oil drops $1 a barrel, the state loses $7 million. If natural gas prices fall 10 cents per mcf (thousand cubic feet), Wyoming’s revenue is reduced by $16 million. In fact, Wyoming has the second most volatile revenue of any state. This is largely due to the volatility of its severance tax revenue.

Lawmakers recently put off a planned $200 million deposit into the stabilization fund to cover revenue losses from declining energy prices—not an insignificant amount but still manageable with a $2 billion fund. Other states are not as fortunate; a recent Pew study found many states have not set aside enough money in reserves to face a growing challenge of countering the effects of volatile revenue. 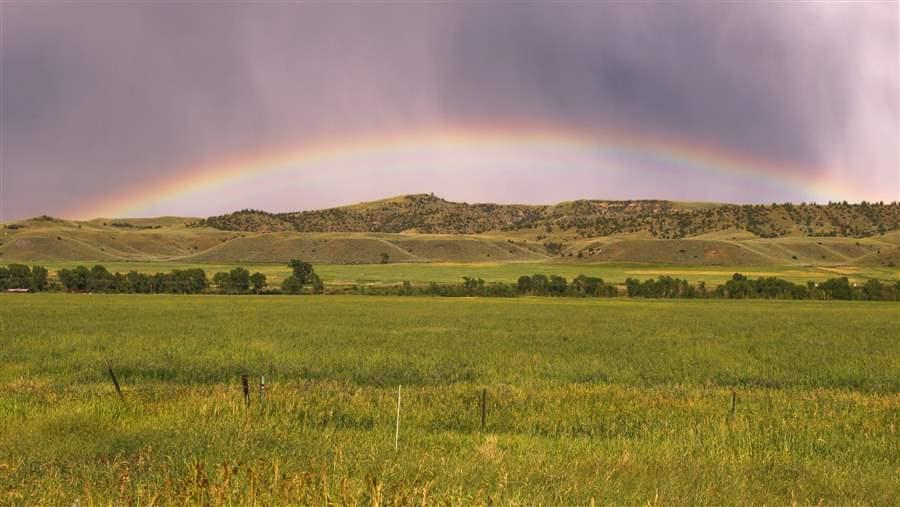 Rainbow over a Wyoming grassland prairie.

Gov. Mead said the discussion of rainy day fund policy is especially appropriate during tumultuous times such as the recent energy price drop because people are more focused than usual on emergency reserve funds. The Wyoming Legislature agreed, making the rainy day fund the top topic for a summer interim session study.

In Mead’s view, the big policy questions to be asked are “What’s the rainy day fund for? How much should we have in savings and what should it be used for?” Related to this, he said, is whether local governments should share in the benefits of spending some of the money along with the state.

The answers to those questions from some Wyoming lawmakers are that the stabilization fund is a true rainy day account, tapped only for a true crisis such as a large drop in mineral prices or a national recession. As it is, they say, current revenue is not keeping pace with the growth in state government.

Many of these lawmakers say the state should stockpile about $3.5 billion, or about the amount of a two-year budget cycle, before considering spending anything above that. Rep. Steve Harshman, a Republican from Casper who chairs the House Appropriations Committee, said in an interview with Pew that if the state can save one budget cycle worth of funds, lawmakers may avoid drastic cuts and tax increases. “Thank God we’ve saved money during the good times,” he said of the rainy day fund. “It doesn’t take much for $2 billion to go pretty quickly.”

Part of the interim study, Harshman said, will be to examine Wyoming’s 14 energy price booms and busts in modern times to determine how long the cycles lasted. Senate Majority Leader Eli Bebout, a Republican from Riverton, was in the Legislature during the oil bust that began in the mid-1980s “that was supposed to last two or three years but lasted 10 years.” Lawmakers cut spending and raised the sales tax to climb out of a budget hole. With that memory as a guide, Bebout said in an interview with Pew, once the state accumulates two years of revenue, he could support spending above that level as long as it is on one-time projects instead of new programs “that grow the size of government.”

Mead and others say $3.5 billion—about $6,000 for each Wyoming resident—is too much. The state is not a bank, they say, but a service and program provider that needs to make strategic investments as well as save for a crisis.

“You collect tax dollars for taxpayer purposes,” House Minority Leader Mary Throne, a Democrat from Cheyenne, said in an interview with Pew. “Sure, one purpose to consider is the [stabilization fund]. But you have to put all of the state’s priorities on the table.”

Infrastructure is one such priority, Throne said. “It’s not good fiscal policy to let things decay and sit on a pot of money.”

Part of the rainy day fund discussion, Throne said, is whether Wyoming should adopt binding rules establishing when, how and how much to deposit into the stabilization fund tied to economic and revenue conditions. Twelve states have such deposit rules. “It needs to be more of an automatic process,” Throne said. 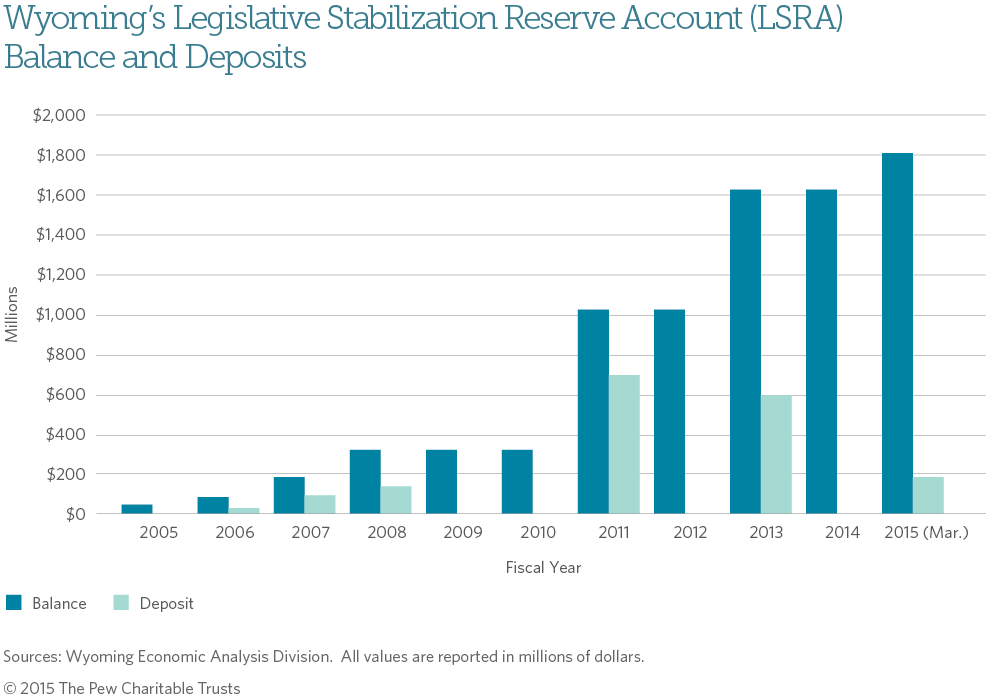