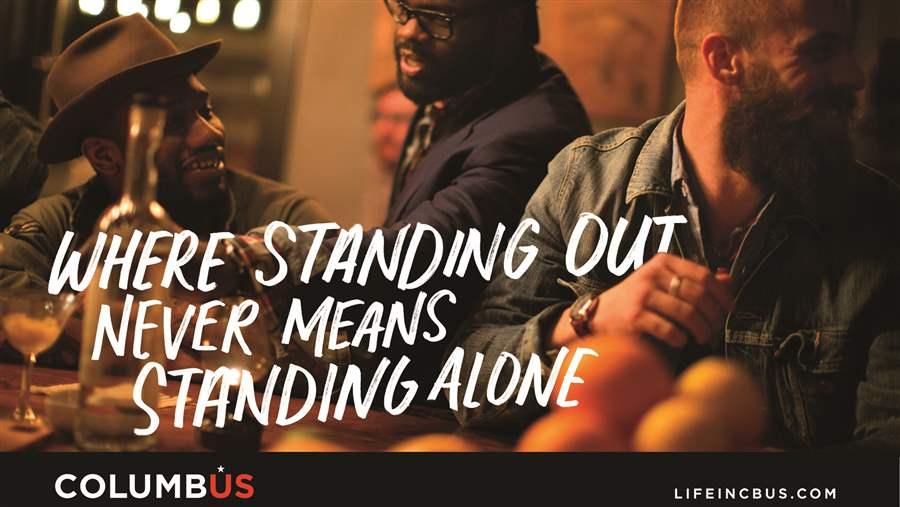 Signboards advertising “Life in Cbus” have cropped up in Washington, D.C. and Chicago, as Columbus, Ohio, has launched a campaign to try to get millennials to relocate there. (Experience Columbus)

This story has been updated to reflect the U.S. Census estimate that the population of Columbus grew to 822,000 between 2010 and 2014, and that 86 percent of Philadelphia natives stayed there after graduation 10 years ago.

They’re everywhere you look in Washington, D.C.’s Metro stations: signboards featuring bearded and fedoraed young adults hanging out, everything filtered through a warmly burnished glow. The text varies from location to location, from “Where Standing Out Never Means Standing Alone” to “Where Cost of Living Is More Living Than Cost,” but they’re all clearly aimed at millennials living in one of the nation’s most expensive cities.

Look closely, and at the bottom, you’ll see “Columbus” and “LifeinCbus.com”—as in Columbus, Ohio, the 15th largest city in the U.S., where city officials are hoping that young professionals will be tempted to move. Or, at least, think about moving there.

Columbus isn’t the first city or state to try this tactic. Across the country, cities such as Philadelphia, Niagara Falls and Detroit are putting out the welcome mat for coveted professionals aged 25-34 in targeted social media and advertising campaigns, and with offers of internships, housing subsidies and student loan reimbursements. Some cities are paying people to move there.

There’s a reason for this: 1 million young adults move each year, according to a 2014 City Observatory study. Their presence in a city is a direct reflection of its health and well-being, the study found, as young migrant professionals are key to fueling economic growth and urban revitalization. (According to the study, only 6 percent of Columbus residents are between 25 and 34 years old with college degrees.)

The come-move-here campaigns arrive at a time when many cities on the East and West Coasts are becoming more expensive. The cost of buying a home in those cities is out of reach for many young professionals, according to Joel Kotkin, a presidential fellow in Urban Futures at Chapman University.

Millennials, born between 1981 and 1997 and now the nation’s largest living generation, are an attractive target for cities and states looking to boost their populations. As the oldest millennials begin to hit their 30s, their priorities shift as they look to put down roots. And that makes smaller cities look more attractive to these “young transitionals.”

“If you’re living in the (San Francisco) Bay Area or New York, at some point you get a very stark option of what your choices are. People can’t afford to stay there,” Kotkin said.

But are the campaigns successful? It’s hard to say, said Joe Cortright, an economist and director of City Observatory, a think tank funded by the John S. and James L. Knight Foundation. There’s little research tracking such marketing efforts, and it’s difficult to gauge the subtle influences of media on personal decisions like where to move. But research shows that college-educated young adults aged 25 to 34 are twice as likely to live within three miles of a city’s downtown core, he said.

“The one thing we know about this group of people is they’re extremely mobile. If they don’t like a place, they move on. The trick is less in attracting people to move, it’s building an appealing reality that will get them to stay,” Cortright said.

Ohio, in the heart of the Rust Belt, was walloped by the recession, when its unemployment rate nearly doubled from 5.7 percent in 2008 to 10.6 percent in 2009. But Columbus, home to the state capital and Ohio State University, withstood some of the fallout. Its population grew over 4 percent between 2010 and 2014, to 822,000, according to U.S. Census estimates. It also does well in attracting young outsiders, ranking 13th among U.S. cities, according to a study by Cleveland State University.

But the city has had an image problem, according to Amy Tillinghast, vice president of marketing for Experience Columbus, the city’s tourism division, which launched the campaign in collaboration with the mayor’s office. It’s not that Columbus had a bad image, she said. Research showed it didn’t really have one, especially compared to a city like Austin, Texas, which these days is seen as a capital of cool for young adults.

So last year, city officials launched a campaign to try to woo “young transitionals” with signboards in Chicago and Washington, D.C. It also launched a website of aggregated content where those mulling a move or a just a visit can read about a new restaurant or ponder “five reasons to start a technology business in Columbus.”

“This is an invitation to think about Columbus,” Tillinghast said. “We definitely want to be in people’s minds. If that image (they have of Columbus) is forward, younger and hipper and that there’s a lot going on here and there’s a lot of opportunity here and we’re a very cost-effective city, then so much the better.”

Other cities have taken a more aggressive approach to wooing young talent. Some are led by city government, others by corporations looking to attract new employees, others by nonprofits.

Last year, activists in once-bankrupt Detroit launched Write a House in an effort to revitalize a city littered with the abandoned shells of once-glorious houses. Their schtick: to give away a house to a writer who wanted to move to Detroit. In November, Brooklyn poet Casey Rocheteau moved to the city, the first to win a house in the national contest. (There will be another giveaway contest; Write a House will start taking applications on April 27.)

Companies like Quicken Loans and Compuware launched a “Live Downtown” program offering real estate incentives for their employees. New homeowners can receive up to $20,000 in a forgivable loan toward the purchase of a downtown Detroit residence, while renters get a $2,500 in their first year renting. Over the past four years, Quicken has either hired or relocated 12,500 employees to work in the downtown center, where they can take advantage of the company’s housing program, according to Josh McManus, director of “assorted and diverse things” at Rock Ventures, the parent company of Quicken Loans. (Yes, that is his actual title.)

“You do need to attract tech talent; a lot of our companies are technology companies that require specific talent. But there’s also a clear sense of being part of a bigger mission, to be part of the next phase of a great American city,” said McManus, who moved to Detroit five years ago and has taken advantage of his company’s housing incentives.

Like other American cities that blossomed with industrialization and then declined as manufacturing plants shuttered en masse, Philadelphia’s population shrank dramatically in the last part of the 20th century. The number of Philadelphians shriveled from a high of 2 million in 1960 to a low of 1.47 million in 1996, according to U.S. Census statistics. Since the start of the new century, the city’s population has inched up to 1.5 million.

Ten years ago, Philadelphia was faced with a conundrum: It was home to over 100 degree-granting schools in the metro area with more than 300,000 students. So why wasn’t it retaining the thousands upon thousands of out-of-town students who flocked there each year?

For those born and bred in Philly, about 86 percent stayed after graduation. But only 29 percent of non-natives stuck around after college. Unlike Washington, D.C., which attracts policy nerds, or Los Angeles, which draws young people looking to break into entertainment, Philadelphia didn’t have a hook to keep students.

So the city launched Campus Philly, which started as a city initiative and morphed into a nonprofit that runs with some city funding. At first, Campus Philly focused on encouraging students to explore the city. Now, the focus is on linking students to internships with local companies while exposing them to the arts and volunteer opportunities. Internships were the key to getting students to stick around, according to Deborah Diamond, president of Campus Philly.

According to a 2014 report, about 51 percent of out-of-towners now choose to stay in Philadelphia immediately after graduation, while 76 percent of natives opted to stay in their hometown.

“Choosing Philadelphia is a two-sided coin,” Diamond said. “There have to be job opportunities, but you have to like where you live. You have to help students connect with the communities in a way that’s meaningful. Some people think job growth drives retention, but people don’t stay if they don’t like it. And for this generation, quality of life is important.”

City officials in Niagara Falls, New York, are hoping that quality of life will woo homegrown talent back. Since the 1950s, the city’s population has been halved, the result of shuttered industries. The decline hasn’t stopped. In 2010, there were more than 50,000 residents in the city, which borders Canada. In 2013, there were just over 49,000, according to the U.S. Census.

But rather than trying to lure newcomers, city officials figured the people they really wanted were folks already living there and natives who had left, said Seth Piccirillo, director of Niagara Falls Community Development.

“These are young people, college graduates, people who would want to stay if there were jobs,” Piccirillo said.

Two years ago, the city started offering up to $7,000 in student loan reimbursements for young adults willing to move to downtown. So far, 13 renters have taken the city up on its offer, Piccirillo said.

“Our No. 1 priority: to get people to stay, that’s our demographic,” Piccirillo said. “We’re looking for urban pioneers who want to be involved in the community. We want people who are from here to be able to stay with their families.”