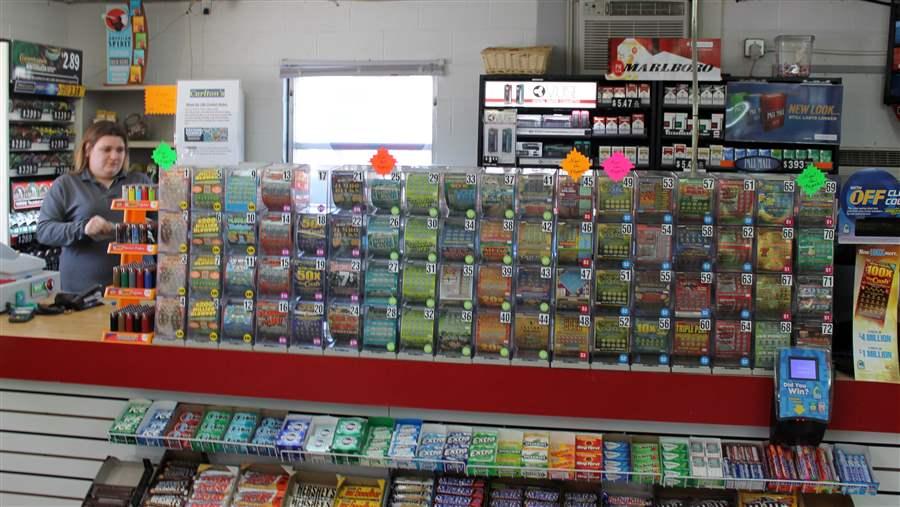 Assistant manager Renee Plowman prepares to load one of the 72 slots for scratch-off lottery games at Carlton's convenience store in Clemmons, North Carolina. Many states are questioning whether state lotteries have gone too far in promoting games like these. (AP)

For years, lotteries have been a lucrative enterprise for states, reliably bringing in hundreds of millions of dollars to fund everything from education to environmental preservation to homeless shelters.

But now some lawmakers and anti-gambling advocates are pushing back. Recent forays into online and mobile lottery sales, along with long-standing concerns about aggressive marketing and problem gamblers, are prompting many states to question whether lotteries have gone too far in their quest to raise money.

The proposals to rein in lotteries come as many states are starting to embrace new technology and new games. Some of the new rules would touch on how tickets are sold, while others would regulate what can be on billboards advertising the games. In some states with bills to expand lotteries, the proposed limits have sparked fierce opposition.

Forty-three states and the District of Columbia operate their own lotteries, up from 37 states plus D.C. in 1999. In times of shrinking revenues and yawning budget gaps, states have turned to lotteries to stave off spending cuts.

There is a simple reason for their growth: They pay. Twenty-one of the states with lotteries saw more than $1 billion in sales in fiscal year 2014, with New York leading the way at $9.2 billion, according to the North American Association of State and Provincial Lotteries. Altogether, sales topped $70 billion. That’s more than 10 percent of the total state revenue in states’ collective budgets for fiscal year 2014. Sales averaged about $1.6 billion per state and D.C.

But many anti-gambling advocates and skeptical lawmakers point to the staggering sums not as measures of success, but as signs of a deeper problem. They argue that lotteries have grown so big they’re preying on problem gamblers and worsening some of the social ills — poverty, homelessness, and more — they were designed to address through new revenue. Expanding the business into new sales avenues is the last thing states should be doing, they say.

“State lotteries have a business model that’s based on getting up to 70 to 80 percent of their revenue from 10 percent of the people that use the lottery,” said Les Bernal of Stop Predatory Gambling, which advocates an end to state-sponsored gambling. “They can talk all they want about how much they care about citizens, but state lotteries are the poster child for the rising unfairness and inequality in our country.”

A Stateline analysis of state sales data shows how many states rely heavily on lottery “super users.” Three states (Rhode Island, South Dakota and Massachusetts) had 2014 lottery sales that topped $700 per capita. While 10 states had per-capita sales below $100, per-capita sales for all state lotteries averaged almost $250.

Sales numbers like those and concerns about problem gamblers have fueled legislation to limit credit card ticket purchases, and to beef up warnings and addictive gambling services. Proposals to allow credit card sales in Kentucky and New Mexico, for example, drew a harsh rebuke from lawmakers. And last year, Ohio poured millions into a campaign to raise awareness about problem gambling.

In Minnesota, a bipartisan bill from Republican state Rep. Chris Swedzinski would require 25 percent of lottery billboards to be dedicated to a warning about the odds of winning, cautions about addiction and information on where problem gamblers can seek help. At a hearing on the measure, Swedzinski said his bill would help educate gamblers about the potential downside of the lottery.

But the measure faced questions and opposition from other lawmakers and state lottery officials. Some questioned why the lottery, but not Native American casinos, for example, would be forced to include such warnings in their ads.

“A number of the legislators kind of realized quite honestly that it’s kind of absurd to require the least problematic gaming there is to go miles beyond the most addictive as far as warnings,” said Ed Van Petten, executive director of the Minnesota Lottery. “Do we require every business that has a downside to have warnings such as that?”

The billboards bill was sidetracked by questions and amendments about whether it should be expanded to include other gaming enterprises and was sent to another committee. But it could resurface before lawmakers adjourn in May.

A more pressing issue is whether lottery tickets should be sold online and via avenues such as mobile sales, video slots, or at gas pumps and ATMs. Pro- and anti-gambling forces have faced off over the new avenues, while lottery officials have begun to embrace them as a way to ensure much-needed revenue continues to flow to state treasuries.

A handful of states have considered measures to allow online sales or expand gaming, according to the National Conference of State Legislatures, while others have stepped in to preemptively block the practice. Last year, for example, Oregon considered encouraging lottery retailers to embrace video slot machines, a new and potentially lucrative revenue stream. At the same time, Colorado and Maryland moved to outlaw online gaming.

Anti-gambling advocates decry the move to online, mobile and other novel sales strategies as an attempt to squeeze even more out of gamblers. But lottery officials defend them as steps to ensure their businesses stay relevant in the digital age.

“Ultimately, we don't want to be the post office,” said Terry Rich, president of the North American Lottery Association and head of the Iowa Lottery. “Gaming, and especially the lottery, is one of the last things you can’t do on your mobile phone.”

But as Bernal of Stop Predatory Gambling put it, “Their business model is based on getting people to spend more.”

Minnesota has emerged as a battleground over new sales strategies, in part because lottery officials there have decided to press ahead with ticket sales at gas pumps and ATMs over objections from the legislature.

“We have an obligation as the lottery to keep up with the times,” Van Petten of the Minnesota Lottery said. “To do that, you have to have a presence on the Internet.”

The debate promises to be fierce. Democratic Gov. Mark Dayton last year vetoed a bill that would have blocked online scratch-offs and ticket sales at gas pumps and ATMs. But a similar measure has resurfaced this year, and lawmakers are eager to address it.

“It’s kind of like the lottery’s gone wild,” said Republican Rep. Greg Davids, chairman of the House Taxes Committee and a driving force in efforts to rein in the lottery. “This is way out of control. They’re trying to get another generation hooked on gaming.”